Well, that was quick. What started out as rumor yesterday has been confirmed today.  Assassin’s Creed 4 is a real thing, and we’ll be learning more about it very soon.  Read on for the details.

The first hints that something was cooking on the Ubisoft stove showed up on Reddit nearly a month ago.  But the big break came yesterday, when Kotaku published images purported to be Assassin’s Creed 4 marketing materials, featuring the subtitle “Black Flag.”  Examiner added even more ingredients to the rumor stew by showing a screenshot from the game, and claiming that the protagonist will be privateer Edward Kenway, father of AC3’s Haytham Kenway.

Ubisoft has finally confirmed that Assassin’s Creed IV: Black Flag is indeed the title of their next game, and that they will be announcing much more this coming Monday.  In the meantime, they released cover art for four confirmed versions of the game, including PC, PS3, Wii U, and Xbox 360.  Check out the PS3 cover below, which incudes an advertisement for additional content, only available on PS3. We all love console exclusive content, don’t we?  Folks?  Hello? 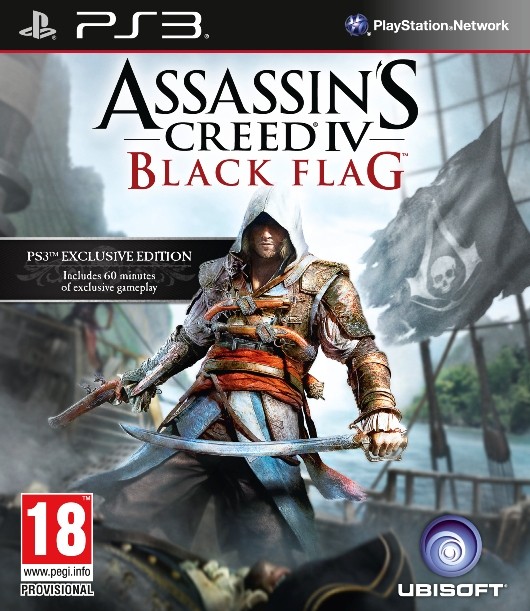 Now do you see where I got the title for this article?  Clever, huh?  I know I kept you waiting awhile, but I figured a little suspense never hurt anyone.  While nobody really knows what Ubisoft will be showing on Monday, IGN is claiming that they will reveal a trailer and game play details at 8:30 AM pacific time.  You’ll notice that IGN didn’t use the word “exclusive” in their announcement.  That’s because we, little old Save Game, are the ones who have scored the exclusive reveal.  So, for the first time anywhere, I present to you the very first footage of Black Flag.

Oh… OK, that wasn’t Black Flag the game.  That was Black Flag, the pioneering hardcore punk band from the early 1980s.  Sorry for the confusion.  I guess we will have to wait until Monday afterall.  Sweet tune, though, right?