Sony have announced the Uncharted Greatest Hits Dual pack – releasing in North America on September 6. The pack bundles together both Uncharted: Drake’s Fortune and Uncharted 2: Among Thieves (GOTY edition) and includes a whole host of additional content, including content for the upcoming Uncharted 3. The price? A sweet $39.99 Check the link below for full details. 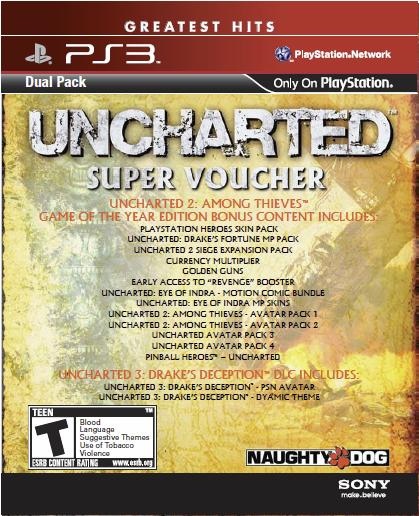 From the Playstation Blog:

“Here at Naughty Dog, we’re excited to bring these two critically acclaimed games together for the very first time. As we focus on finishing up UNCHARTED 3, we look back and are humbled by the accolades we received for Drake’s Fortune, our first game in the series, and we never could have imagined that our second entry, Among Thieves, would go on to become the 2nd highest-rated video game of all time, receiving over 200 GOTY awards and over 41 perfect review scores. We want to thank all of you again for your continued support!”

Head on over to the Playstation Blog to watch the official Uncharted Dual Pack trailer, and if you have a PS3 but are yet to purchase these games – do yourself a favor and grab this pack when it releases September 6!