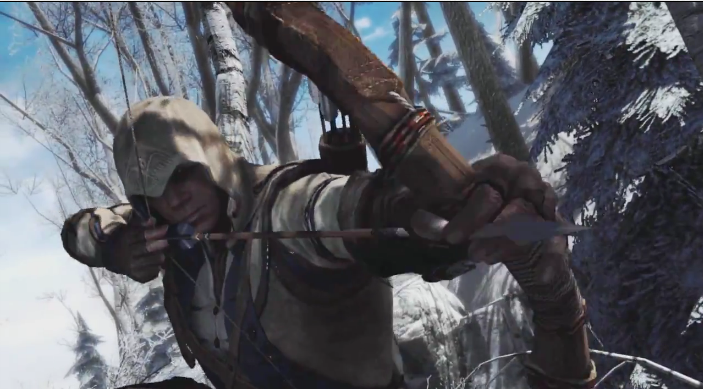 The hype train for Assassins Creed 3 has left the station, and is building up steam.  Earlier today, Ubisoft unveiled a short teaser for it’s first gameplay trailer, set to premiere in the near future.  The clip is under a minute long, but what it lacks in length, it more than makes up for in snow-covered badassery.  Read on to watch the teaser, and to learn how you can help quicken the release of the full gameplay trailer.  Here’s a hint: there’s a like button involved.

So, here it is.  The teaser for the Assassin’s Creed 3 full gameplay trailer, henceforth to be known as TACFGPT.

Wait! Stop! Don’t even try to make an “arrow to the knee” joke.  The arrow clearly impacted in his calf, a minimum of three or four inches below the knee. Now for the not-so-fun part.  Or fun part, I suppose.  If you like spending time online, giving game publishers free publicity.  In order to unlock the full gameplay trailer for Assassins Creed 3, Ubisoft is running a contest on its facebook page…. 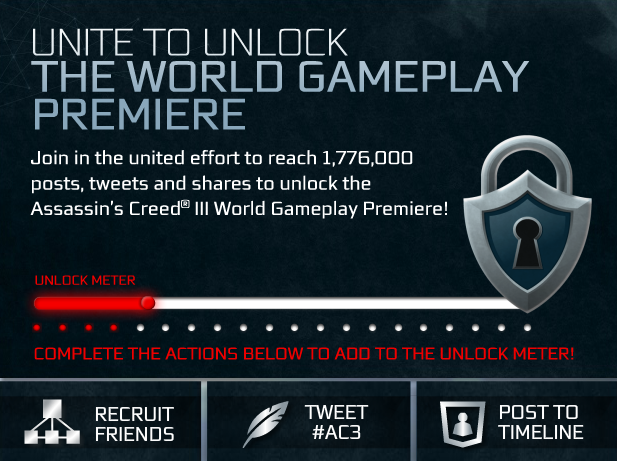 That’s right, folks… like, tweet, and post about Assassins Creed 3 1,776,000 times (get it?) and the full gameplay trailer will unlock.  I guess these facebook pledge drives are pretty standard issue these days, huh?  Does anyone actually enjoy them?  Anyway, from the looks of the teaser, the full trailer should be very impressive.  If we’re all willing to spread the Ubisoft cheer around our social media circles, we should see the trailer in a few days.  The game launches on October 30, and we’re sure to be seeing and hearing much more about at E3, which is just a month away.