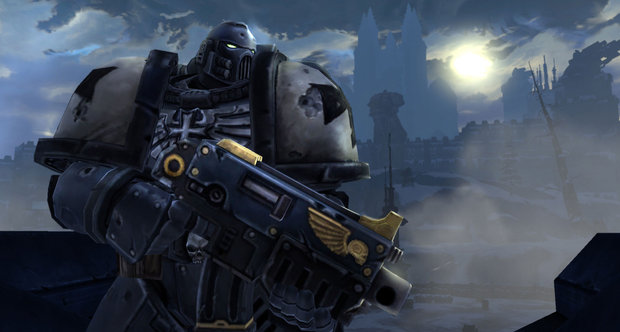 Humorous article title aside, this isn’t a very funny story.  Financial troubles at parent publisher THQ have caused them to scale back production on Warhammer 40,000: Dark Millenium, an MMO being developed by Vigil Games and Relic Entertainment.  While the game hasn’t been cancelled, it is no longer the massively multiplayer gargantuan it was once shaping up to be.  Read on for the details.

In a press release earlier today, Brian Farrell, President and CEO of THQ, explained that the inability to find an investment partner for the game has caused them to move development away from its MMO roots, and toward a single player game with online multiplayer components.  If you’re interested in his elaborate use of corporate speak, here’s his exact quote:

“As previously announced, we have been actively looking for a business partner for the game as an MMO. However, based on changing market dynamics and the additional investment required to complete the game as an MMO, we believe the right direction for us is to shift the title from an MMO to a premium experience with single and multiplayer gameplay, robust digital content and community features. Because we believe strongly in the high-quality and vast creative work that is in production, this is the right decision for both our portfolio and for gamers devoted to this powerful property.”

Changes in development are nothing new, but this “shift” comes with a price.  79 full time employees at Vigil Games of Austin, Texas have been let go, with an additional 39 positions terminated at Vancouver based Relic Entertainment.  So not only has Dark Millenium’s scope been reduced, but two development studios have also been dealt a serious blow.  Even though THQ is still “genuinely excited about the new direction” the game is headed, I can’t help but assume that their excitement isn’t shared with Warhammer fans, or the 118 talented and motivated developers who are now looking for new jobs.