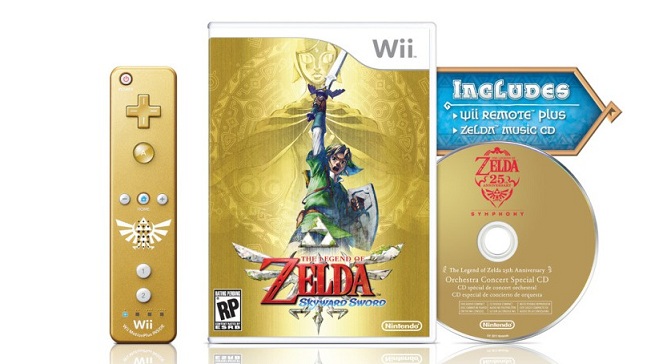 Nintendo has revealed a limited edition of Zelda: Skyward Sword that comes bundled with a gold, zelda-themed wii remote plus. The remote features a gold body, along with gold D-pad and A button, and is finished off with the Zelda royal crest adorning the speaker area of the remote. A Zelda music CD will also be included in the initial production run of the game – for both the limited edition bundle and the standard edition. And the cost for this bundle? $70 if you live in America – no word yet on the price for European consumers.

According to Nintendo (on the inclusion of the music CD):

As an additional 25th anniversary treat for fans who purchase the game early, every copy in the initial production, whether sold by itself or as a part of the limited-edition bundle, will come with a free CD featuring select orchestral arrangements of iconic music spanning the history of the franchise which will be performed at The Legend of Zelda 25th Anniversary Symphony Concert performances in October 2011.