First person shooters seem to be a dime a dozen these days, with every major publisher fielding an FPS title within their lineup of games. EA is no exception, but does Crysis 3 – their latest offering in the third person shooter domain – bring something new to the already crowded FPS corral? Or is Crysis 3 just another tired nag when compared the the drafthorse powerhouse that is the Call of Duty series? I won’t spoil the whole review in the first paragraph, but the short answer is Crysis 3 provides one hell of a ride.

As its name suggests, Crysis 3 is the third installment in the popular Crysis series. Much lauded for its eye-meltingly gorgeous graphics, Crysis 3 was one of the most anticipated games of 2013, helped in part by the strong promotional campaign by EA itself. The game is set 24 years after the events of Crysis 2, with players taking on the role of Prophet as he returns to New York only to find the city abandoned, overgrown by nature and encased in a giant Nanodome created by the very evil and very corrupt CELL Corporation. I won’t give any story spoilers as part of this review, but I will say that Crysis 3 provides a fitting end to the events and main character stories from the first two games. For those new to the series, Crysis 3 includes a ‘previously on Crysis’ segment that catches players up with the events from the previous games and provides some backstory to the current plot. It is an excellent inclusion to the game and illustrates that the Crysis series does want to be more than simply another FPS game whose plot is quickly forgotten once a player finishes the campaign.

The graphics for the game are, simply put, stunning. The Crysis series is well known for its beautiful graphics and thanks to the CryENGINE 3, in Crysis 3 these are certainly on display. You won’t find the generic browns and greys and more browns of most FPS shooters here – the vista’s and environments in Crysis 3 are breathtaking in their variety. There were times during my playthrough where I had to stop, look around and appreciate the beauty of the environments I found myself in. The overgrown city of New York is one of the stand out set pieces of Crysis 3, and seeing it completely overrun with jungle is a sight to remember and be in awe of. I may sound as though I’m labouring this point but anyone who has seen this game will know how gorgeous it is, even on the relatively limited processors of consoles when compared to PC’s. The game looks amazing, and I shudder to think what kind of beast of a computer you would need to play the game on its max setting. 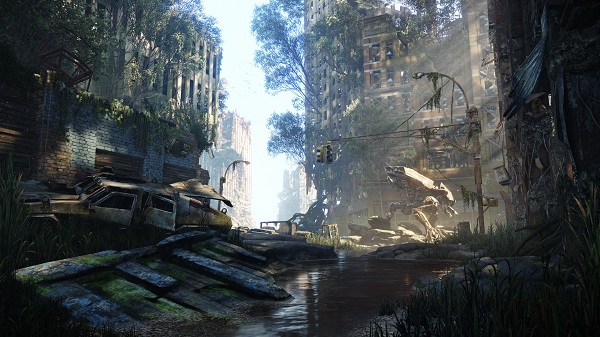 Gameplay wise, Crysis 3 also impresses.  Weapons look and feel like their real-world counterparts and dispatching enemies with them feels satisfying. The much promoted ‘predator bow’ makes you feel exactly like its namesake and is the perfect accompaniment to stealth playstyles. The nanosuit makes you feel every inch the dangerous, feared, silent killer if you are able to efficiently utilise it with the predator bow to take down enemies silently. However, whilst Crysis 3 does an amazing job of making you feel like the ultimate badass when you are successful in your stealth moves, it also does a good job of making you feel like a bumbling fool of you are unsuccessful at staying stealthy. The game employs a balance of intense action and silent stealthiness, and whilst the stealth element may appeal to some gamers, I felt it detracted from my experience with the title. I’m a gamer who favours the FPS playstyle of entering an area, finding a great place that affords a lot of cover, then picking off my enemies one by one as they attempt to do the same to me. If you try to do this in Crysis 3, the game will treat you as though you’re simple. And whilst the game never forces you into extended stealth segments and you are able to play how you want to, you do feel incredibly unaccomplished if you employ a balls to the wall approach.

Returning to the nanosuit, Crysis 3 does an amazing job at maximising your use of the nanosuit in combat situations. After you’ve played Crysis 3 and chosen your favoured upgrades to apply, you’ll wish every FPS game had its own nanosuit. More than simply armor, the nanosuit also allows you to enhance your speed, strength, visual and cloaking abilities, allowing you to become the ultimate tactical soldier. Strength and speed upgrades allow you to utilise your environment to maximum effect against your opponents. Vision enhancements provide you with the ability to evaluate the battlefield to take advantage of tactical opportunities. Enhanced melee upgrades and the ability to cloak enable you to silently kill your enemies without them ever knowing you were even there. The nanosuit truly is spectacular, and you are an almost unstoppable force to be reckoned with when it’s utilised effectively.

Enemy combatants within Crysis 3 employ high level tactics and even on the simplist difficulty you will feel challenged by them. There are a variety of enemies, ranging from the run of the mill human soldier type to the much more challenging and frightening Ceph. There is one enemy Ceph type in particular that I’m convinced was created solely to haunt my nightmares – and that’s the Ceph Stalkers. Whilst originally encountered in Crysis 2, Ceph Stalkers return in Crysis 3 and this time their design has been changed to provide for spikes along their backs. Perfectly living up to their names, the Stalkers are pretty much Velociraptors on crack who will make you think twice about walking through any areas with high grass or bushy foliage. Or, if you’re like me, they will make you flat out refuse to go anywhere near such areas until you’ve suitably prepared yourself with positive self-talk and a godly amount of alcohol. Suffice to say, combat within Crysis 3 is challenging yet enjoyable and whilst enemy encounters will get your blood pumping they’ll never make you want to rage quit or frustrate you. 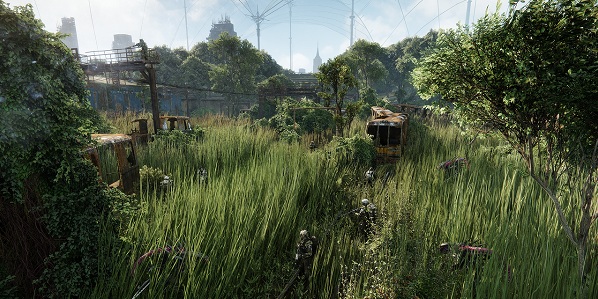 Something that may frustrate you, however, is the game’s mandatory checkpoint saving system which does not support manual player saves. Whilst automatic checkpoint save systems appear to be the norm in gaming these days, I am definitely not a fan of such mechanics. To be unable to save whenever you want to creates an unnecessarily restrictive gameplay experience. Such systems do not support gamers who only have small periods of time in which to play games, or gamers who need to be able to quickly save their progress because they are unexpectedly called away from their gameplay session. However, whilst I am not a proponent of checkpoint save mechanics, I understand their usage and I do not rate a game less simply because they are employed. What I will mark down, however, and what I encountered in Crysis 3, was an automatic checkpoint system that failed to work in all instances, leading me to lose hours of progress. On several occassions upon continuing from my prior save, I was forced to replay areas I had previously cleared because the automatic checkpoint save system had not worked. After the first time this occurred, I was very careful to only turn off my console several minutes after the checkpoint reached/save graphic had flashed up on my display. However, despite doing so, I encountered problems with re-visiting areas several times after the first. Speaking as someone who does not have a large amount of time to replay areas I have already cleared, I found this both frustrating and a waste of my time. Perhaps issues with automatic checkpoint saves aren’t as important when you have an abundance of time on your hands, but for someone who has only small pieces of time in which to play, such checkpoints do detract from the experience.

Issues with automatic checkpoints aside, one area where Crysis 3 absolutely shines is in the use of music. The game’s score is musical perfection – there isn’t a better way to say it. This is a score which is melodic, intense, haunting, memorable and bewitching. The title music alone is a piece I could listen to over and over and never find it anything less than superb. So often scores are simply background music, something that’s there but never truly remarked upon. But in Crysis 3 the score is a standout, and an amazing accompaniment to the game. If you aren’t an FPS fan but love expertly crafted music, check out the soundtrack. You won’t be disappointed.

As an FPS, Crysis 3 does a lot of things right. But what puts it above other games of its ilk is that it attempts to be more than a simple shooter, and for the most part it succeeds. The Nanosuit works well with the weapons and the challenging enemies to provide the player with a feeling of sweet untouchable badassery when enemies are successfully defeated. The envrionments are gorgeous and varied and the game presents a re-imagining of New York which is without a doubt one of the most beautiful I’ve seen. The gameplay is varied, challenging and provides for some exploration and replayability given the amount of upgrades to the nanosuit that can be found scattered about the levels. A beautifully realised soundtrack compliments the gameplay and stands on its own as one of the best game soundtracks I’ve heard. Unfortunately for Crysis 3, a glitchy checkpoint autosave feature stops the game from scoring too highly.

For a game that provides an enjoyable and challenging experience when the autosave checkpoint feature works, Crysis 3 scores an 8.5 out of 10.