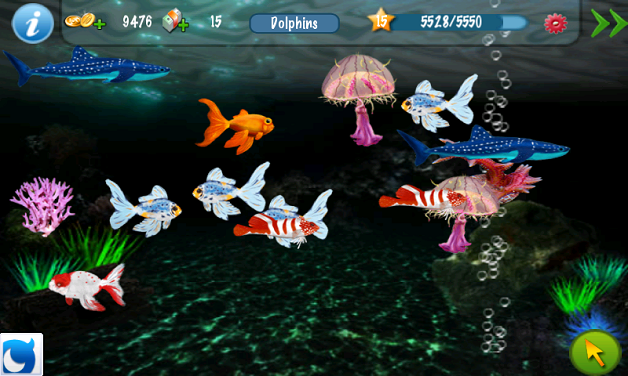 My luck with fish has been rather tenuous over the years. My first one actually lasted almost a year. The next ones after that lasted less than 24 hours (both of them), although I think that was due to the fact that they were $0.77 each and that I had bought them from a tank with a dead fish in it. Later on I purchased minnows and they lasted a while (I even had a snail growing!) before donating them to my friend after a few close calls with my cat.

Anyhow, decided to try my luck again with virtual fish. You see, I have a sexy new Samsung now, and wanting to try out some of those lovely games that are so fun when I steal other people’s iPhones and whatnot. I saw the Tapfish app offered for free on the Android market and I decided to give it a try…and really didn’t expect to be as enthralled with the game as I was.

The interface is really quite easy to use. Simply tap icons or fish on the screen to find out more information or access more options for your tank. Move things around in your tank by clicking and dragging. Access the menu by tapping icons. Check your fish stats by tapping the fish. Buy things by tapping icons. It’s quite simple (in a good way) and except for the small annoyance of often accidently clicking things that I didn’t want, it’s really quite nice. Maybe I just have fat fingers.

There are two kinds of currency in the game: coins and fishbucks. Coins are the most common type of currency and the most plentiful. You earn gold coins by doing basic things, such as cleaning the tank and loving your fish, and this is how you can eventually buy stuff. Fish bucks are more rare (you get a new one every level), or you can buy more with real money. You can decorate your tank with whatever items you desire. Certain backgrounds become available as you breed all the types of creatures in a certain fish type. 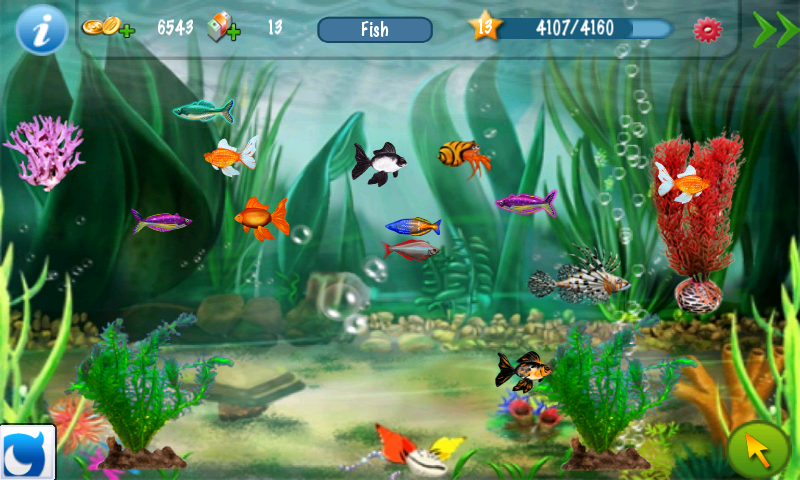 The real meat of the game is in breeding and selling fish. This is how you progress throughout the game. Initially the choices are rather crappy, but as you progress you can unlock some wonderful, rare additions, such as turtles and jellyfish and dolphins. Be aware that fish cost money, but you can earn coins by breeding cheap fish and/or selling them, progressing in levels (you get a certain amount of coins, plus one additional fish buck for each level upgrade), or you can buy them with real money. Naturally, I chose the hard and free way.

Let me tell you: breeding fish is astonishly addictive. For each fish type you unlock, there are several different types to eventually breed. The first four choices are purchasable, but the last three types need to be bred to be acquired. You can only breed five times in a twenty-four hour time frame, and will take you several attempts to breed a special fish. (I remember one crab in particular took me twenty tries alone). This can be remedied with a Coral Pot, which guarantees that you get the special fish you desire.

The game runs on real time, so if you don’t feed them every few hours, then you might be in for a surprise if you open the game a day or two later. The second time I logged into Tapfish, I discovered my little ones had died. No worries though! I used one fish buck to revive them, and all was well.

Overall I would say this game is a solid 8/10. It’s quick, easy, accessible, and amazingly addictive. It’s great for kids who need a distraction, or for adults who can’t keep any pets.