And Walking Down the Aisle…WWE13 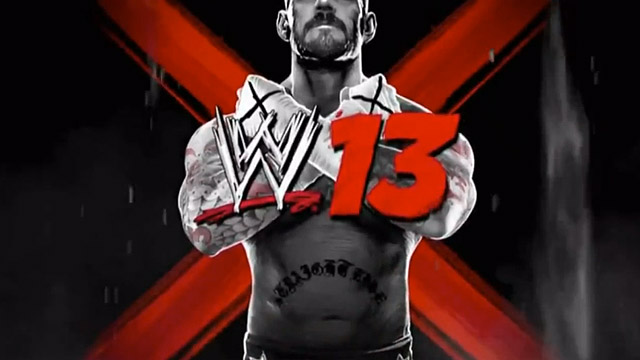 Let’s be honest, you are either a wrestling fan or you aren’t. So let’s just say that this game is almost exclusively meant and designed for wrestling fans. So if you aren’t, this review probably wouldn’t mean much to you period. But for you wrestling fans, I know many of you are disenfranchised with the television product right now.  Hear me out. WWE13 provides that experience that many of us have been left wanting for some years. That feeling of old when the magic of wrestling is oozing from the ring is here and it’s here in so many ways.

Obviously, this game centres around one thing: wrestling. And thankfully this game manages to not only provide a healthy array of moves shown on TV for years, but it incorporates the feel and flow of real matches. However, there is a rather steep learning curve, even for veterans of the series. The controls are somewhat complex. Striking is relatively easy and tied to only one button. Grappling moves are not only dependent on a button press, but direction presses of the left thumb stick as well as an understanding of timing and positioning to execute the dozens of moves you can have assigned to one wrestler.   And of course you have the option to run, taunt, climb the turnbuckle, use the environment, reversals, and the ability to store finishers after you build up enough momentum to obtain the ability to use them. It’s complex and difficult to explain; in fact, even familiar with the controls, it took me a few matches to get the feel of the mechanics down and even after hours of losing myself in the game, I haven’t perfected or even remembered everything I can do. And of course, there are minor issues with the AI, especially their penchant for reversal chains. But this is by no means a terrible thing.  This variety and complexity not only makes the game challenging, but authentic and intense.   How else could you literally leap out of your seat when you just manage to release the button at the right time and jolt that shoulder up before the count of three? Or pump your fist when you finally drag the title from above the ladder after an exhausting 30 minute match?

That immersion and the impact of those moments are only intensified more with the inclusion of things like comebacks and several new finisher oriented events. Not only can you spark that sudden and intense comeback made famous by Hogan and snatch victory from defeat, but with a stored finisher (or three) you can activate special OMG moments tied to various environmental points in and around the ring. I won’t spoil them here, but believe me… when you hit them you will cackle in absolute glee. They are a blast. My personal favourite, however, isn’t really a part of the OMG addition, but its own separate improvement called the Catch Finisher. This is simply a reversal move available to wrestlers with the appropriate finisher, marked as a catch finisher in the move set lists. Again, I don’t wish to spoil the moment since activating it on the fly for the first time and seeing the move be execute leads to one of the most satisfying moments in the game and you’ll find yourself bein so drawn into the moment you just react. That is the magic of wrestling in all its glory. 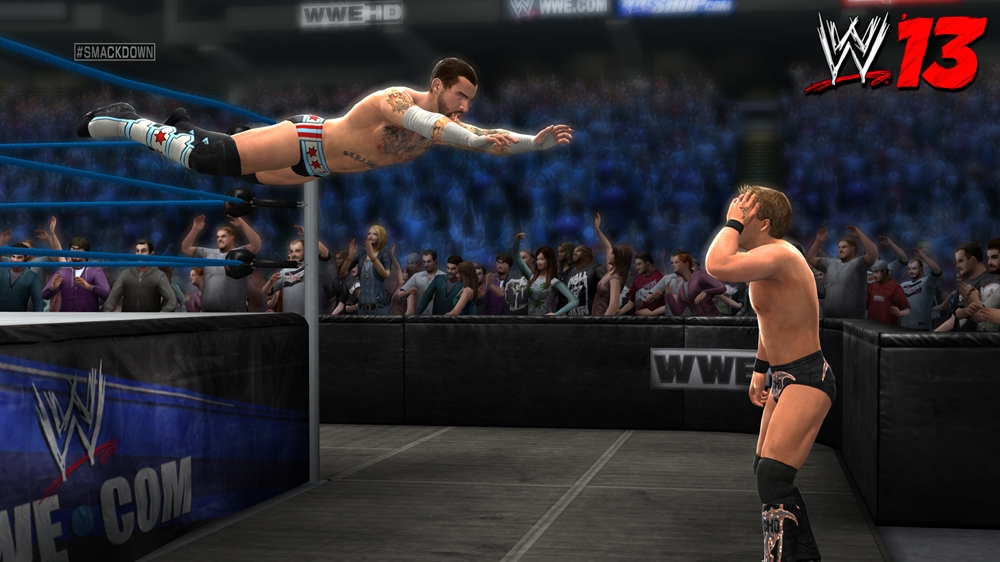 The wrestling itself isn’t the only draw to the game. Much of the hype of this year’s offering is the Attitude Era storyline. Instead of last year’s “original” linear storyline or the old branching paths of many years ago, WWE13 offers a historical re-enactment of some of the most pivotal and most memorable moments of the Attitude Era. For newer fans or those few non wrestling fans that just like the games: the Attitude Era is an era of then WWF, now WWE, that began in 1997 and roughly ended in 2001. It is often considered the most successful and most loved era in wrestling by many fans.

So you can imagine how much this mode has fans impatiently waiting to personally interact in history. And it is spectacular. As the player, you will see little blurbs written by Paul Heyman leading up to each event before you are placed in the moment to relive the matches and events that shaped the era. The mode offers several objectives to meet during matches, including optional and hidden objectives that make the re-enactment better reflect the actual event. These events span several slices of the Attitude Era, separated by an individual superstar or group of superstars such as The Rock, DX, and Stone Cold. And throughout all this, the player is met by the commentary duo of Jerry Lawler and Good Ole’ JR, who not only performed some of the commentary again but surprisingly, there were actual recorded moments used from the real commentary 15 years ago.

All of that lends a sense of nostalgia and awe that is welcome, especially for someone that enjoys re-watching the events.Getting a chance to actively re-live it in a way is nice. However, it also provides one of the major criticisms as well – commentary. While most of the Attitude Era commentary is decent, having it side by side with the snippets lifted from history only shows the weakness of the scripted commentary and its AI. This is especially true outside of that mode when everything is on the fly. It sounds less natural, doesn’t flow all that well, and sometimes for moments, especially some of those OMG moments, they completely miss call the action or miss the call altogether.   It’s nothing huge but it is noticeable.

Outside of the story mode is a bevy of features from the Universe mode to the multitude of creative options. The Universe mode is simply a mode where the game provides rosters for several of the flagship WWE programs, sets schedules, and lets you play as any superstar you wish in any match. There are small feuds and cutscenes, nothing elaborate, that lends a feel of progression in the mode; but most of the true pull to the mode is when you take a created wrestler and work him up through the ranks. I cannot tell you how satisfying it was to start from scratch, pull out some minor victories against lower tiered wrestlers like Otunga and Ryder, then find yourself in contention for the US title.  Soon you’ll earn a spot in the Money in the Bank match for a shot at world title contract and find yourself in mini feuds with CM Punk and Brock Lesnar. It’s simple and the tiny bits of story are nothing really special, but the mode is absolutely addictive and you can suddenly find yourself in a classic drawn out war of a match. 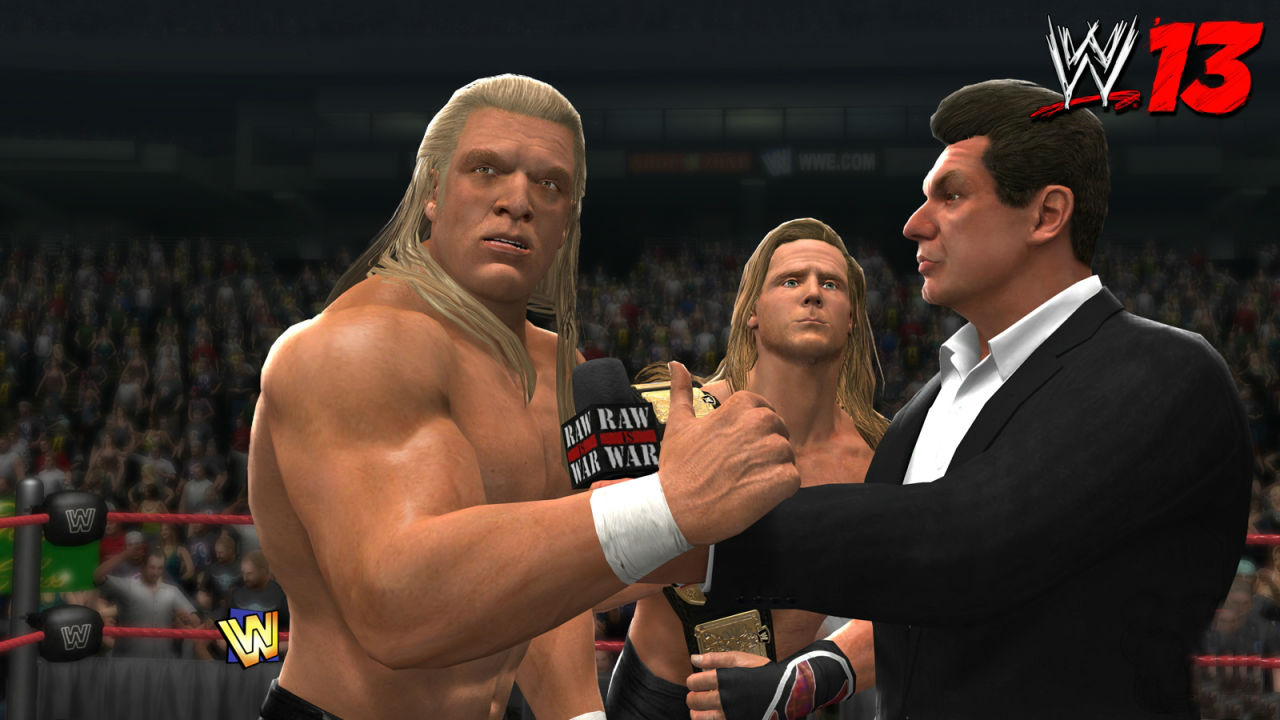 But the true addiction for me is the creative modes. From creating a wrestler, assigning the moves, creating entrances, movies, highlights for any moment you wish to record, all the way to creating championships and arenas… the creative addict in me can easily get lost in all of that. Then of course is the create a story mode. It’s nothing new, though it seems a little more refined than before. This mode allows you to not only create little stories and matches, but to include branching paths in these stories. This essentially revives the old story modes of pre-voice over WWE games. If you have the patience and desire, you can create a long, engrossing story that can change on variables you decide. However, it is a complex and time consuming process of choosing scene types, writing dialogue, and fleshing out the decision paths yourself all while balancing it with logical matches. It’s arduous, but I find it immensely rewarding for the small scenes I’ve completed so far. Luckily, most of the creative modes are rather intuitive and simple to use.   Though if you wish to create a championship you must go to the “My WWE” selection and choose title management and scroll over to create one. It isn’t with the rest of the creative options. It is there though.

I am not sure of the appeal of a wrestling game to anyone that isn’t already a fan, but the mechanics are solid, the story mode well executed, and the various options offered all make this one of the best wrestling games to date. For this long time fan, it’s a wonderful feeling to get so immersed in not only a match, but the moments it can create, that the old wrestling aura and magic washes over me. It’s something rare in today’s television product, but this game proves that not only is it not dead… but that it can still thrive if given the chance. For that alone I would recommend this game to any wrestling fan. And for those non-wrestling fans curious as to why those like me love wrestling, maybe this game would give you that insight.

This is a spectacular ode and symbol of what wrestling is.