The thing is, and I mean this in the utmost respect to Tecmo Koei, I just don’t see why it was warranted. There’s an audience out there that responds to this genre, but given the poor reviews for the original game all those years ago, a re-release with some new DLC (of sorts) probably won’t win them any favours.

Honestly, Bladestorm: Nightmare isn’t my kind of thing, despite its intention to be some type of all out action spectacle. I will say, though, that I’m quickly becoming a Dynasty Warriors fan. I put that down to how fun it is to take out mountains of troops with a quick flurry of attacks, and I was rather hoping I’d find the same kind of simple button mashing fun here. But Bladestorm goes in the opposite direction, doing its best to bring more tactical awareness into the gameplay.

Your main quest is to lead troops into battle during the Hundreds Years War, which is where Bladestorm originally made its name.  Additionally, you’ll be tasked with taking down hundreds of evil monsters in the new Nightmare mode (hence the subtitle). You’ll create a commander, and push them forward across fairly large battlefields, switching up your strategy as you go. To that end, there’s some merit to what the game has to offer, as you need to carefully choose what troops to lead in a sort of rock/paper/scissors type scenario. Get it wrong, and you won’t last. Get it right, and its rather satisfying. 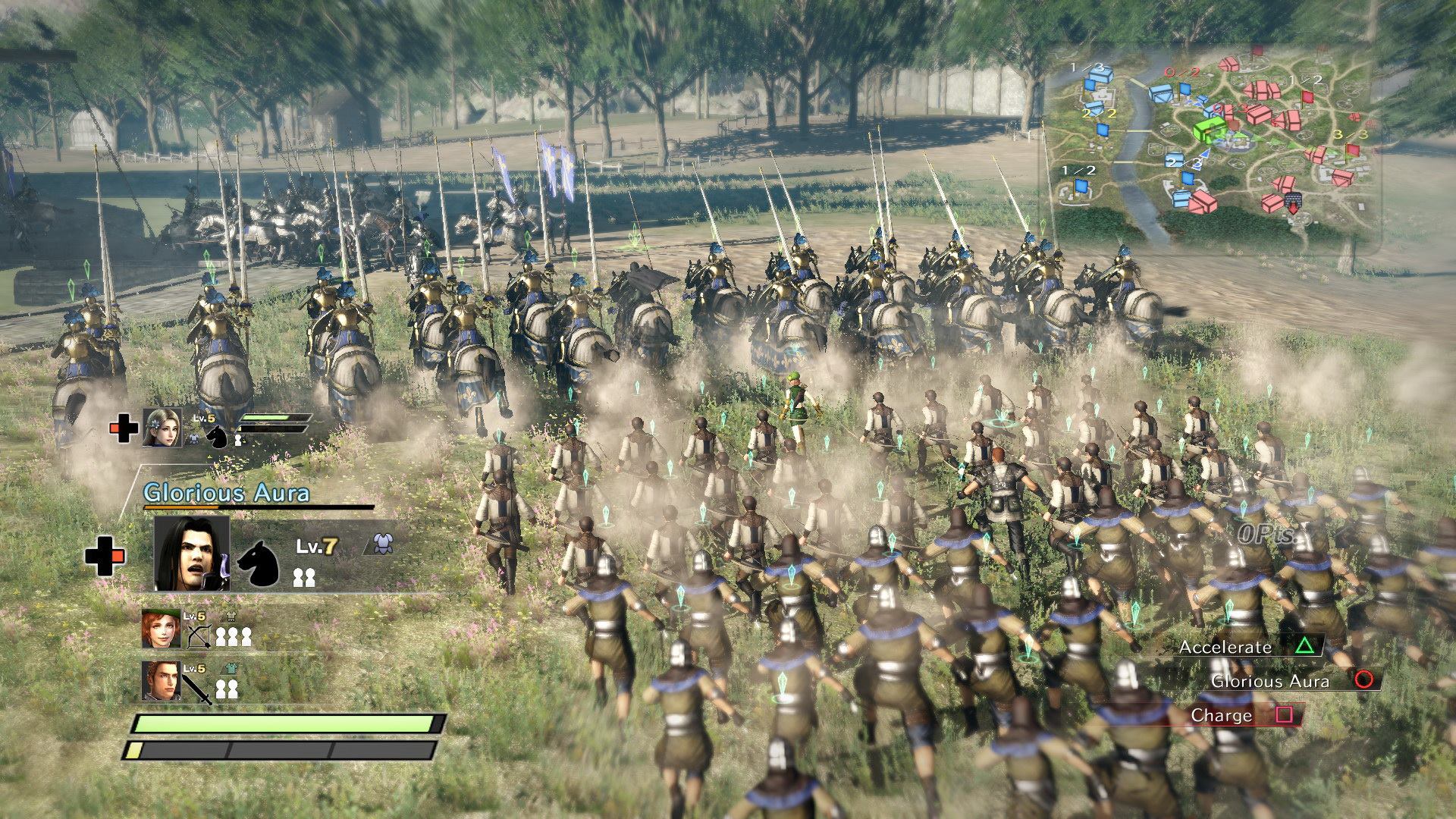 The problems with Bladestorm start at the very beginning. Despite all that the game does offer, there’s very little in the way of control over what you’re doing, and that’s largely due to the murky, bland environments and characters around you. My first attempts at fighting had me lead a group of swordsman, or what I thought were swordsman, into battle before quickly getting lost. Reason being, everything sort of melded together. There’s no real way to distinguish your troops from anyone else on the field (despite the big arrows over their heads), and switching between troops is a messy, cumbersome affair.

It’s even harder figuring out who the opposing forces are. The map has red and blue markers indicating the enemy presence and areas you need to capture. If it weren’t for those, I’d have been lost in a heartbeat. Still, even when I reached the markers, I couldn’t tell who to fight next. Instead, I found myself pressing the various attack buttons at random moments, hoping it would hit something, running around like a headless chicken in the mean time.

The actual combat itself is … boring. You don’t really have control over how you’re swinging or shooting at any point. It’s all ‘bash your shield now’ or ‘shoot’ commands based on a single troop move, leading them into said action by a button press. My character would be in the fight, but rarely did he swing a sword unless all the others did it at the same time. It was a random mess.

So yes, Bladestorm feels like a poor attempt at taking the 3rd person action of Dynasty Warriors, and mixing it with a Total War type of troop leading strategy, but it doesn’t work for me. It’s missing that spark, that sense of being in the middle of a war, to the point where if Tecmo Koei had really thought hard about it, things could have been far more exciting. Hundreds of troops mushed together in a small space would have at least kept me entertained a little longer, a little like their fancy CGI intros. 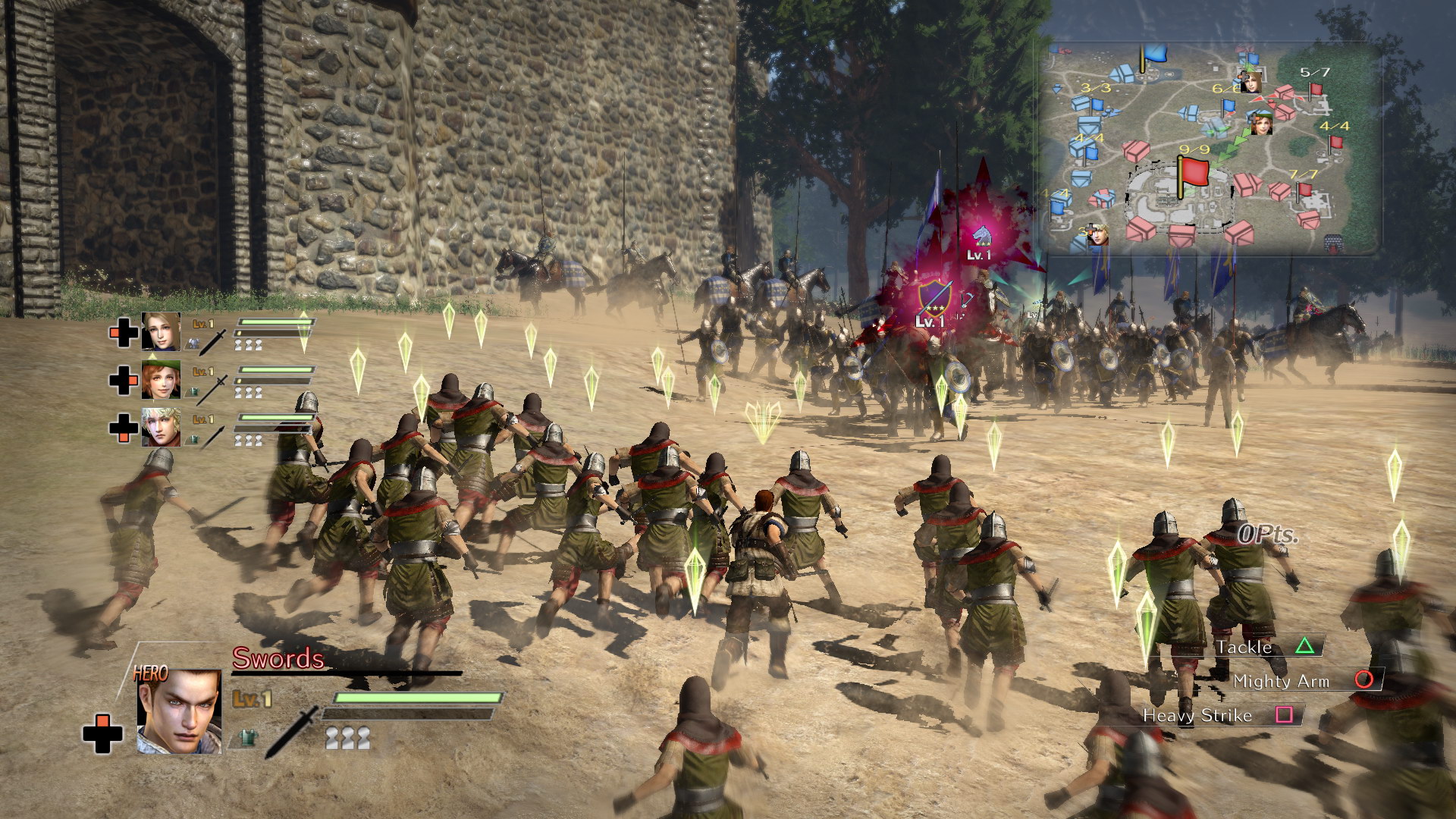 Nightmare mode does introduce a few more fantastical elements to the gameplay, such as monsters and dragons, but again it gets lost within the same issues as before. It just didn’t captivate me the way I hoped it would. I had more fun creating weird characters in the character creation system than anything else in the game, and that’s not a good sign.

But the thing is, there will be someone out there who will appreciate the slower pace of Bladestorm: Nightmare, and I’m not going to hold that against them. Sometimes it’s better to plan and play it slow instead of rushing head long into a fight you’ll no doubt lose. But if you take the package as a whole, Bladestorm is entirely disappointing.

As I said, the presentation leaves a lot to be desired. War torn battlefields shouldn’t be splashed with a thousand colours, but a little detail would have gone a long way to spice things up. Textures blur, trees look like paper thin pieces of fabric blowing in the breeze, and character models are lacking that modern day detail. Being a seven year old game really hurts here. It’s like they upscaled the resolution, but didn’t bother to change any of the texture mapping.

But the thing that really stuck out for me was the voice overs, a combination of English and French speaking artists who feel less like they belong in battle and more like they belong in a country town somewhere in Peter Molyneux’s Fable series. Most of the voices don’t fit the character’s portrayed, and others sound terribly campy for something that’s attempting to recreate an important piece of medieval history.

Bladestorm: Nightmare will have its fans, I have no doubt about that, but perhaps Tecmo Koei should go back to the drawing board, and build something that’s deserving of being on a next-gen system. What’s here is bland; enough to distract from any decent points that could have been said. It’s a shame. The setting is intriguing, and the battles could be fun once a heavy dose of polish is applied. I rate it a 5 out of 10.