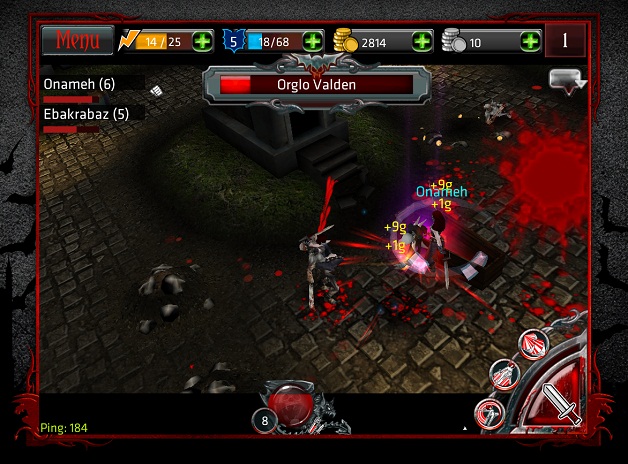 I’ve never played an MMO.  Ever.  So when Jen asked me if I wanted to review Dark Legends, a free game available via android or Google Chrome, I was intrigued.  As it turned out, for a nearly free game, it’s really quite excellent.

I went to my Google Chrome browser, went to the website, said I wanted to add it to my apps, and voila! The download was quick, easy, and painless; all that was required was an email and a password.

The sign-up process was linear, and quite easy. I found the game to possess much of the same manner, with little annoyances that ended up snowballing a bit.

The first starts with the customization. After I get through the tutorial, I’m trying to name my character.  Should be simple.  Except while I can input a name and include a space, when I hit “enter” the name automatically combines the two words together.  You can choose the gender of your player character, but customization options are very limited at first.  When you get enough gold you can go to the store and get some new outfits.  One outfit I wanted was 50 Platinum; I only had 10. So I looked at how much out-of-pocket change it would take to get an outfit.  30 Platinum for $4.99 wouldn’t get me much.  If I wanted the outfit that much, I could have purchased 65 Platinum for the cost of $9.99, which I found a little expensive, but companies need to make money somehow.  Luckily, Platinum is not required to purchase all of the accessories; the gold you accumulate in your journeys is also used to purchase items.  As expected, the best stuff is more expensive. 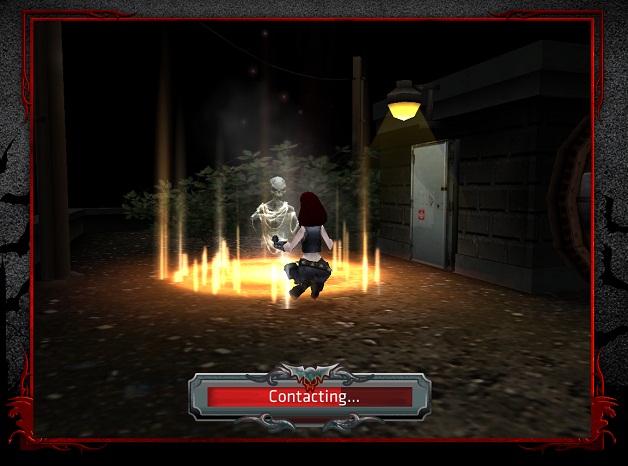 Speaking of Platinum, it is used for game perks. If your energy is very low, you need to wait until it comes back up again before embarking on another mission, and Platinum speeds up the process.  It takes approximately five minutes to regain one hit point, so if you had 3/25 health like I did, you could be waiting awhile.

The game certainly tries to set an ambiance. The colour palate is blood red, black, and grey with skulls and stylized writing.  It was very, very, dark, as if the game were taking place in a cartoon horror movie.  There also seems to be a semblance of a plot, so I was rather pleased.

If you go to the Vampire District you can see how many other people are playing the game as well; you can buy things in a more interactive manner, with storeclerks, and you can kind of socialize with others.  If you click the vampires, you have the choice of making requests, or sending messages, or giving them gifts.  It’s not a facet that I had a chance to overly explore before the review was due, but it seemed very interesting.

Combat was easy to pick up, and I only died once in the several times I engaged in battle.  PC gamers who download this should have no issues with the WASD key movements.   I’m a console gamer, so that took a bit of getting used to for me.  If I wanted to attack enemies, I clicked on the sword icon or power-ups with my mouse.  As you kill enemies, a skull fills up with red blood, and once it gets filled enough, you can click it and unleash a feeding attack.  You have the choice of going solo or doing multiplayer, but I would recommend doing the multiplayer; you definitely have a higher chance of surviving by teaming up to defeat the hordes of zombies that you encounter. 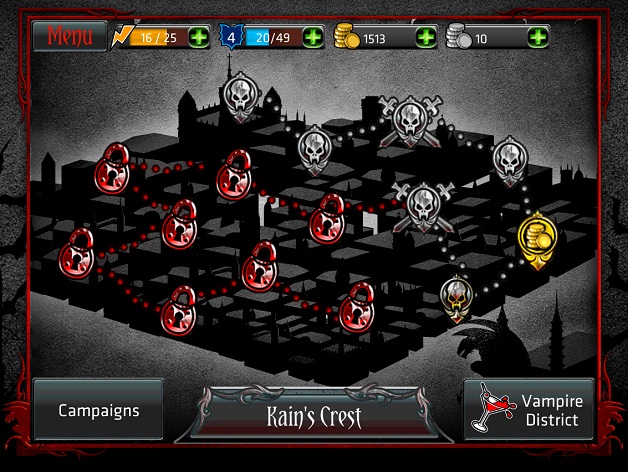 It seemed that many of my quests simply consisted of—waiting.  Waiting, no cutscenes or anything.  Simply a timer going off while I stared at the main menu.  First there was a quest that was three minutes long.  Right after that, there was a five minute mission that was simply looking at the timer again. Then another, this time three minutes. Then one minute.  Then, my fifth mission in a row, I discover I have to wait another five minutes.  Fifteen minutes waiting around is…not fun.  Now, in fairness, I played this on my desktop, so maybe somebody would be happy to simply go back to playing a game for a few minutes here and there while they have other work to do.  Even these quests allow you to accumulate gold, so it’s free money in your pocket that you can get simply by waiting.  You can use Platinum (one of the in-game currencies) to bypass the timer.  However, Platinum costs real-world coinage.

Other things?  I quite liked the music.   It constantly repeats, and people might get bored of it, but I liked the repeating gothic motif.

Would I recommend this game?  Well, I kept playing it.  I did my real-world work (including writing this review) while I waited during quests, so I was able to multi-task.  I imagine this game might also be good for public-transit commuters.  I didn’t find it overly remarkable, but it is certainly one of the most interesting games I have played in a while, and definitely worth a try if you have a desktop or an Android.  I would also suggest that you might have more fun by paying for certain luxuries within the game (I simply played the free version).