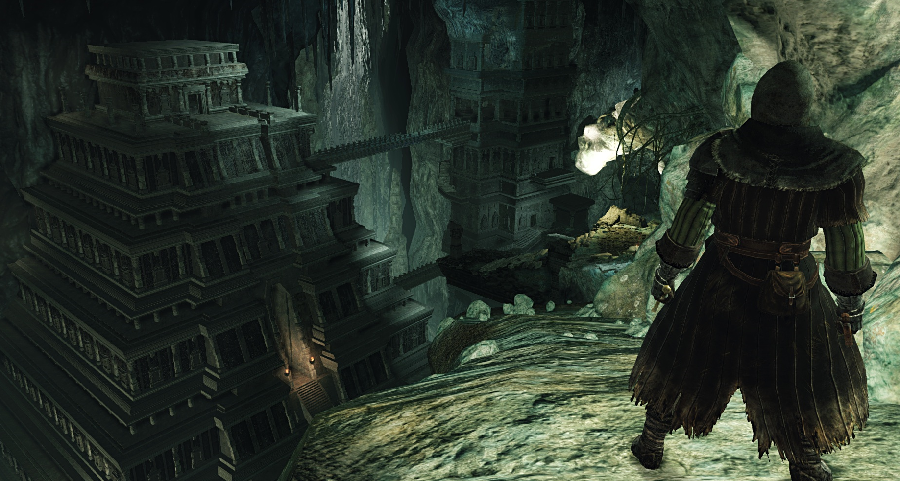 Sometimes, I wonder why I do this. It’s 2am. I’m reeling from yet another death, handed ignomiously to me by another almost impossible to kill Dark Souls 2 denizen. My patience is on a razor edge, I’m so close to throwing the controller down and walking away. And yet I press forward, telling myself I’ll continue for just a little longer, that I’ll try just one more time. Because the challenge of progressing to the next bonfire to save your game, whilst oh so maddening, also leads to the sweetest reward when achieved. This is what Dark Souls 2 does to you, and with the latest DLC – Crown of the Sunken King – players can expect more of the same challenging, yet highly rewarding gameplay.

Let’s be honest – Dark Souls 2 is a damn hard game. It’s challenging (sometimes frustratingly so), yet if you stick with it, it leads to the most satisfying feeling when enemies are conquered and progress is made. It’s no surprise, then, that the Crown of the Sunken King DLC delivers more of the same challenges that seasoned Dark Souls 2 players will already be familiar with. When playing through the new DLC, gamers will feel that familiar dread when venturing down a previously unexplored path, not knowing what they will find as they progress further, hoping they’ll be able to best it, but never feeling confident as they traverse the paths in front of them. It’s that continual challenge to push further through the game levels whilst knowing that the next corner might signal your doom that marks Dark Souls 2 as they type of game that players will either love or hate. Chances are, if you’re interested in the DLC, you’re firmly in the love camp. And as part of this DLC, there’s a whole lot to love.

The DLC itself is accessed during one of the later parts of the original game, with the initial access point within Black Gulch. This means that the game already assumes you have spent considerable time flexing your ‘I love a challenge’ muscles and have, by this point, begun to understand the nuances of the game itself. If you’re looking at this DLC to provide a less intense sidestory to the main game, you’re going to be disappointed. Crown of the Sunken King is tough. In fact, it’s brutal. It’s likely that you will die a whole damn lot as you attempt to work out the strengths and weaknesses of new opponents. What’s more, the DLC introduces new look enemies which will make you jump when encountering them in dimly lit areas, not only because they are very difficult to kill, but also because they are very creepy to look at. Unfortunately, not all the new enemies feel unique and original, with several of the bosses featured in the DLC feeling like re-jigged and re-skinned enemies from the base game. It’s a real shame that not all enemies have that wow-factor of a new challenge to defeat, but this is a small detraction in an otherwise excellent DLC offering.

In addition to new enemies, players will also have to conquer new environmental puzzles, which ask the player not just to exercise their problem solving abilities, but also their dexterity via controller input (or if you’re me, frenzied button pushing until your fingers ache). Solving these puzzles results not only in rewards, but also new exploration – with some areas which appeared seemingly out of reach now available to traverse. The fact that the DLC rewards you for exploring the environment around you increases the tension you’ll feel as you play, because whilst the risk of exploration is high, the rewards are equally impressive.

Given that the DLC has been out for at least a week at the time of writing this review, there are already a multitude of helpful messages to act as prompts to players following in the footsteps of those gone before them. In addition, as with the base game, players have the ability to pull others into their game to offer assistance, and this assistance is definitely welcome when engaging in boss battles, especially the final boss in the DLC. As a word of warning – the last boss battle is very challenging and will require a lot of patience and a trial and error mentality. If you have a few friends who are willing to tackle it with you, you’ll likely save yourself a lot of frustrated swearing and angry, impotent controller squeezing.

Crown of the Sunken King is the first in a trilogy of DLC for Dark Souls 2. It can be purchased individually, or as part of the Season Pass, which will allow gamers access to all three DLC offerings. Available now, Crown of the Sunken King DLC will set you back $10. The DLC is available for PS3, Xbox 360 and PC. I reviewed the PS3 version.

For the challenge it presents, the atmosphere it creates, and the rewarding use of exploration, Crown of the Sunken King scores an 8 out of 10.