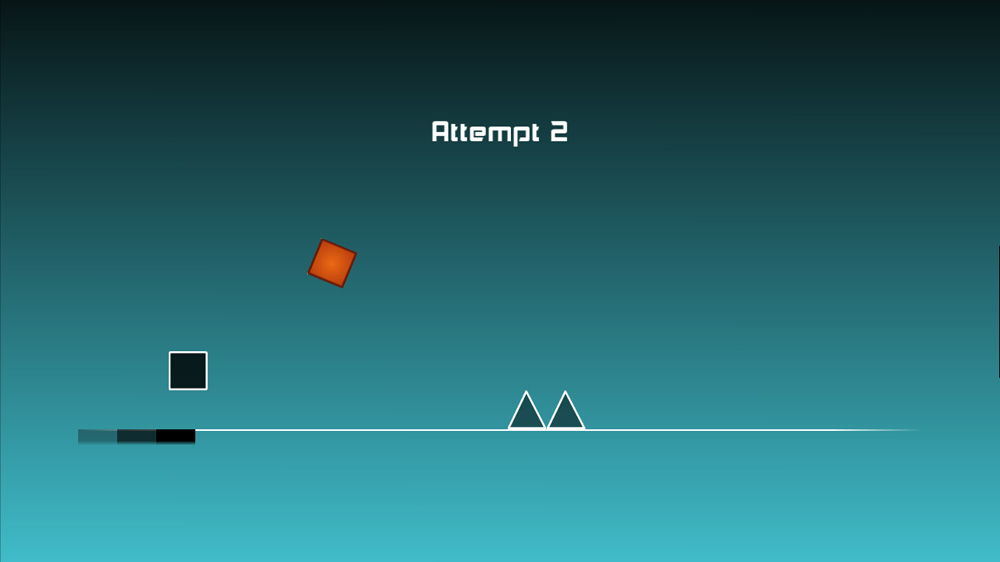 I have not been getting enough sleep or proper nutrition, as have many others in the Save Game community. However, while the others have been neglecting those necessities via copious amounts of Skyrim, I have been doing this via The Impossible Game.

I was first introduced to this game a few months ago via my sister and her iPhone. I played it once, and thereafter took many opportunities to steal her phone away to play it again. Once I remembered Google’s magical search properties, found the developer FlukeDude’s website, and discovered the game was originally introduced as an Xbox 360 Indie Game in 2009, prior to being ported over to other platforms…you can guess what my next purchase was. The game is a 2D side scrolling platformer. The graphics are simple, as is the gameplay. Black lines are pits. Cubes and triangles are barriers. No ambient background scenery is in The Impossible Game except a lovely shade of teal (although you can purchase different levels with different colours). You have to get an orange cube across the screen and maneuver past obstacles until you finish the level. Pressing the A button once makes the cube jump; hold it continually to keep on jumping. Your cube keeps moving as you have to navigate past the earlier-mentioned impediments, without falling too high off of any platforms and into the ground or a pit. This is accompanied with a catchy electronic beat, a simple rhythm at first, which gets more complex in correlation to how far you get in the level. That’s it. That’s the objective and basis of the gameplay. True to the game’s name, you will not be completing it anytime soon. “There was a time when actually beating a game seemed almost impossible,” Save Game staffer Jen wrote a while back; if you agree with her sentiment, rejoice! All the jumping you do in The Impossible Game requires precision and perfection via constant repetition. Trigger your finger a millisecond too early or too late, and you hit a platform at an odd angle only to subsequently crash and die. One miscalculated jump can send you flying past a cube, only to fall on a spike. If you die, you are penalized by having to start all the way back from the beginning. And in case you wonder how many attempts you’ve made, don’t worry: the game records it for you, in bright, taunting white above your little orange travelling cube. And the developers took pity on gamers and actually designed a medal if you have over 100 (failed) attempts in one sitting—trust me when I say it is an easy achievement. There is a practice mode that is easily accessible, so if you’re anticipating any particular impediment that you want to work on without having to go back to the beginning, you can plant a flag; when you die, you start back at this checkpoint. The music also changes from punky electronica to an ambient tune to reflect the new mode, and adds some variety to the multitude of practice and repetition. However, although this mode is helpful, you do not technically finish the level if you get to the end, nor get a medal. But the game continues to record your attempts should you. As for flaws, I can only think of two: sometimes in practice mode, I accidentally press a button that plants a flag; although for the most part it’s fine, sometimes I end up screwing up a jump process that gives me no time to get away from an impending obstacle, or I accidentally plant a flag in the middle of a bad jump that sends me into the ground; since I start from the checkpoint, I am perpetually stuck reliving my failure unless I go back to the menu and restart practice mode. The number of attempts isn’t cumulative, so it is reset every time I go back into live mode (although from live mode to practice mode the attempts are transferred) . This is really a nit-picky, perceived flaw based on my own preferences, and if I wasn’t lazy I could simply write my attempts down. Now that I have finished telling you how difficult this game is: go and get it. It is such a thrill to finally get a few seconds further into a segment that has taken thirty minutes of practice, the techno getting more intense and triumphant as if cheering you on, only to have to start the process all over again. I have yet to finish the level, and once I’ve overcome it I plan to purchase more. Check FlukeDude’s website to see if it is available to download on your console or smartphone, then buy it. For approximately less than half the price of a cup of coffee, you get an exponential return on fun and frustration.

The Impossible Game gets an official Save Game score of 9 out of 10!