Late to the Party: A Review of League of Legends: Dominion 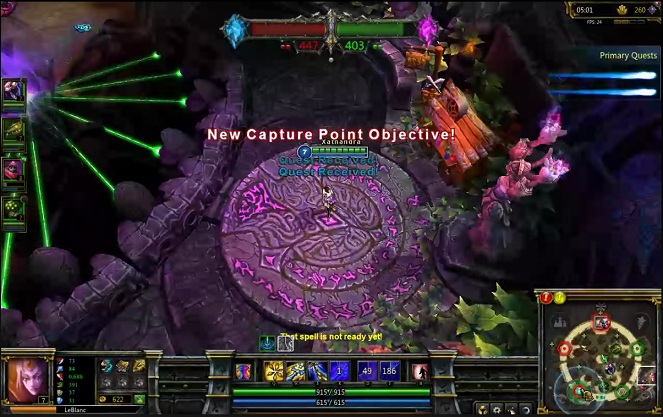 For those of you who don’t know, Dominion is a new mode in the DotA clone of League of Legends which brings a whole new element to the game. Whereas as League Classic is incredibly strategy focused, Dominion does not leave much room for teamwork (save for in cases where you enter the game with a premade team). Games are fast-paced, usually running anywhere from 15 to 30 minutes, as opposed to Classic games which tend to average 45 minutes.

Team composition is not nearly as important in Dominion. Since there is virtually no early game, the importance of team balance has been severely decreased. Certain champions are incredibly overpowered in Dominion games, and because of this, said champions are usually banned right off when playing draft mode. With Dominion there is no break in the action – levels are gained faster, and minion farming is all but eliminated. It operates on a capture and hold point gameplay similar to that of Team Fortress 2’s point control mode, eliminating the objective of capturing an enemy base as was the object in Classic.

Dominion seems to appeal to far more to players who have neither the time nor the desire to coordinate a more strategic match. Because the map is so small and the points are so close together, matches both move quickly and can turn around in very short amounts of time. One team getting an early lead does not necessarily mean they will wind up winning the match.

Gameplay-wise, Dominion is best described as unpredictable. Respawn times are shortened, so It’s best to have a character build in mind going into the game. It should also be noted that some items have been removed from the mode, and others have been added, so builds should be tweaked accordingly. Dominion also introduces objective, or “quests”, into the gameplay. In my experience, this addition was entirely unnecessary, as players seldom recognize the quests, nor can they afford to break from capturing and defending to fulfill specific objectives. The frantic action, as stated before, leaves very little time to coordinate with a team. There are nearly no breaks in the combat, rendering the in-game chat service impractical and therefore useless. This is unfortunate, as moving with a team is one of the best ways to claim victory.

Personally, one of the most appealing things about League of Legends is the heavy emphasis on strategy. The fact that Dominion eliminates much of this was a huge downside for me. Don’t get me wrong, Dominion is by no means badly designed: Riot Games put effort into making an entirely different mode. I have a lot of respect for that willingness to innovate and branch off in an unexpected direction, but now that the novelty has worn off, I rarely find myself picking the mode up. Dominion feels like an attempt to cross over into the TF2-type audience, and as an experiment, I’d call it moderately successful. Will I play it often? Absolutely not – games don’t have enough variety match by match to warrant playing more. However, I can’t write it off entirely as it provides good contrast to Classic’s slower action.