As a huge fan of the Mass Effect series, it’s always a joy to hear new DLC has been released for the blockbuster title. This is doubly true for the latest DLC for Mass Effect 3 – Omega – given this DLC focuses on one of the more…theatrical characters of the ME Verse – Aria T’Loak.

As anyone who has played through the base game will know, Aria was routed from her asteriod stronghold of Omega by those nefarious Cerberus baddies. Re-establishing the smallest of empires (as in she took over a couch) in Purgatory, the bar of the Citadel, Aria spends most of her time in Mass Effect 3 plotting to retake Omega. The newest DLC offering by Bioware provides players with the chance to accompany Aria as she launches her assault on Omega, and attempts to re-take her stronghold.

The new content is heavily action-focused and sees Shepard fighting side by side with Aria and mercenary fighter Nyreen Kandros – the first female Turian featured in the series so far. This is a strictly off-the-Normandy add-on and your current squadmates will not be able to accompany you, which is a shame for those of us hoping for some romance-specific content (we can dream, ok?).

As a whole, the DLC is well-paced with some solid action sequences and gun battles to keep the adrenalin going as you explore Omega. Revisiting Omega feels almost like coming home, and for those who have played Mass Effect 2 there are some welcome familiar faces. As a fan of the series, it is rewarding to see Bioware have included small nods to those of us who have played the previous games, and upon meeting a particular familiar face mid-way through the DLC, I’ll admit to beaming like a kid at Christmas.

The DLC includes new abilities to try your hand at, with both Aria and Nyreen sporting very impressive powers. Aria’s unique power is especially enjoyable to use, and you’ll likely find yourself employing it often throughout the DLC. Aria herself is a joy to have in your squad, and her personal battle cries are so perfectly her. Nyreen makes less of an impact as a character, however given she’s alongside one of the most memorable NPC characters of the series, it’s understandable that she sometimes becomes lost in Aria’s shadow.

The DLC also brings with it new enemy types and both the Rampart Mechs and Adjutants are a welcome and challenging addition to the series. Both new enemies will require a new strategy by players, and you certainly will not want to get close to either of them for different reasons. Also scattered about Omega are new mods for your weapons, and these do provide an incentive to explore off the beaten path. 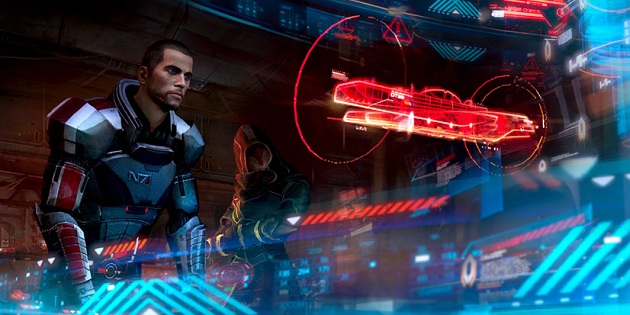 That’s not to say there is much of a beaten path to explore, however. The Omega DLC is very linear and very much a case of enter an area, clean out the enemies and move on. There are a few side quests on offer but even these can be completed without straying far from the mandatory quest path. Given how action-focused this DLC is however, the linearity of it is unsurprising, and there is enough variety in the environments to prevent any deja-vu boredom setting in.

Where Omega really shines is in the storyline and the way in which the experience changes depending on whether you, as Shepard, decide to tackle the story as a Paragon or Renegade. Throughout the new content, you will be given many chances to act as either a Paragon or Renegade and depending on your choices, you will experience a completely different playthrough. Once you have completed the DLC acting to one particular moral leaning, you’ll want to revisit the content to experience the opposite morality. This provides good replayability and extends the around 5 hour DLC to more than that.

There are some small detractions to the Omega DLC – in some cutscenes there are odd glitchy movements by characters and other cutscenes appear only 90% complete – but overall the DLC offers a solid several hours of new content which should appeal to most players. Solid is the key word here. Those looking for an exceptionally memorable, high impact experience will likely not find it in Omega. Omega does what it does well, and it offers a good burst of new content for those of us who are itching for more Mass Effect goodness, but it is not the standout DLC experience that Bioware have delivered in the past.