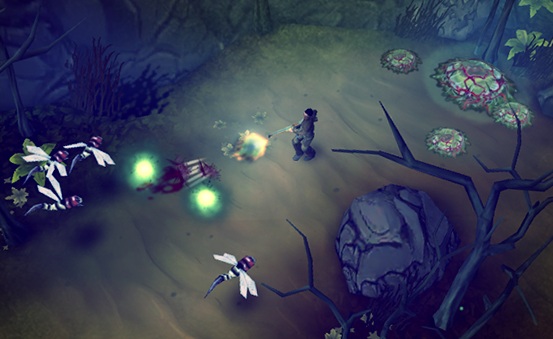 I’m a commuter in New York City.  There are several methods of completely avoiding the Jesus people, the beggars and mariachi bands.  My favorite of these involves a pair of headphones and my iPhone.  Luckily, I just spent some time immersing myself into Kiloo Games’ new overhead shooter title, Bullet Time.

The protagonist in this story is John Irish.  He’s a rough a tumble guy who’s trying to save his family in a post apocalyptic world populated by terribly mean mutants who would like to kill him.  So dammit he’s gonna kill them first.

The very first thing I noticed about Bullet Time is the art.  It’s a very cool graphic novel style with colors that really pop and a color scheme that sets the mood.  Everything is  a rusty discolored yellow which sets the tone nicely.  Animations of the combat and the bad guys as they come running at Mr. Irish are well done.  I found the controls to be fairly easy once I figured them out.  It took me a little while though.  It’s not exactly intuitive so needless to say I spent some time running from mutants like a little bitch instead of shooting at them.  Eventually I got back on track and was able to do some damage.

The game is pretty challenging and filled me with a nice, delicious adrenaline rush whenever Irish was surrounded by mutants and having to fire in a 360 degree pattern.  No mariachi band on the subway has ever made me feel quite like that (sorry guys).  My apologies to the guy in the seat next to me for having to watch and listen to me squirm and whimper.

There are several different objectives in the game in addition to the most obvious, which is as usual “Don’t die.  And get the thing.”  Having to destroy crates of supplies or fix generators in order to progress provides a nice little break in the straightforward action, though enemies will still attack while you’re doing these things.  They’re not mini-games, but real time objectives.  Luckily there are handy little checkpoints along the way that will save your progress as you go.

Bullet Time can be a little repetitive at times.  The world generally looks the same and the enemies tend to be clones of each other, but this is a minor thing, especially for a free iPhone game.

Ah yes.  Did I mention this game is free?  Because it is.  It’s a perfect mobile game for your commute or when you’re killing time (why kill time when you can kill mutants!)  I recommend a download.  Give it a shot.  You’ll probably enjoy it.  There’s even a 3 player co-op multiplayer mode, which I sadly didn’t get to check out.

I’m going to go ahead and give this an 8 out of 10 because its pretty well made, it’s free and we here at Save Game have a soft spot for up and coming indie developers like Kiloo.  If this review hasn’t whetted your appetite, then check out the trailer here.