Today is a very dark day.  Millions of people around the world woke up to a world without football.  As the final whistle sounded on Superbowl 46 last night, it brought down the curtain on the 2011-2012 NFL season, and doomed fans everywhere to six months of no-football misery.  I’ve dedicated this week’s Mobile Monday to relieving the pain I know many of you out there are feeling right now.  How, you ask?  Well… by reviewing a football game, of course.

I’ll begin my review with a question.  What is the moment in every game that elicits the most anticipation and excitement?  If you’re anything like me, you’re going to say the deep pass.  To me, there is nothing more thrilling (or terrifying) in a football game than when a quarterback steps back, winds up, and sends a bomb deep downfield.  The entire stadium holds its collective breath as the ball spirals towards its target.  Time seems to stand still.  It’s intoxicating, and NFL Flick Quarterback is built almost entirely around that singular moment.

NFL Flick Quarterback, developed by Full Fat Games, is not your average football video game.  As the title suggests, it is all about the quarterback.  You’re going to be passing, and passing a lot.  The first time you load the game, you’ll be asked to create your own quarterback, giving him a name, number, appearance, and team.  Being an officially licensed NFL product, you have every team in the league to choose from.  Once you graduate from the ubiqutous training mode, you’ll be given four main modes of play: Playmaker, Quickfire, Trickshot, and Trickshot XL. 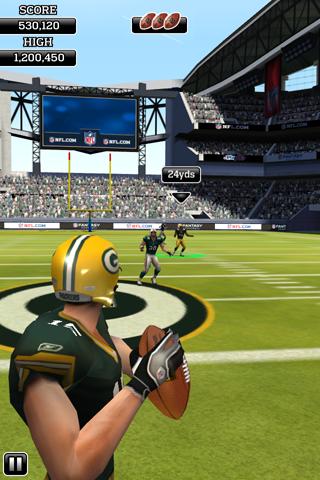 Playmaker is the deepest mode in the game, and the one you’ll probably spend the majority of your time in at first.  As the quarterback, you’re given the task of completing passes to your teammate downfield.  As the game progresses, your teammate gets farther away, and the defense becomes more difficult to avoid.  Computer controlled defenders will not only cover your teammate, but also try to sack you.  So while you’re waiting for your man to get free, you also have to dodge oncoming linebackers.  Fail to complete a pass three times, and the game is over.  Quickfire is a lot like Playmaker, except instead of lives, you’re given a countdown clock.  Completed passes give you time, incompletes or sacks take time away.  When the clock reaches zero… you guessed it, game over.  The other two modes, Trickshot and Trickshot XL, remove the other players from the field, and replace them with barrels, into which you have to throw the ball.
I was very surprised by the polished look of Flick Quarterback.  The developers have obviously spent a lot of time watching football games on TV.  Even though the action is restricted to passing, each round has an authentic NFL feel to it.  From the music, to the splashy team graphics, to the announcer, the game just feels right.  Added effects like crowd noise, pyrotechnics, and dynamic weather add to the realism (as a Packers fan, I was delighted to see it snowing in my stadium).  The graphics, while not state of the art, are nonetheless very good.  The players and environments have a colorful crispness to them, and the movements of the players onscreen are very well done.  Having your receiver waving to you when he gets open was an especially nice touch.  The controls are quite responsive, and you’ll feel in complete control of your custom QB.  You’re even given the ability to control the ball while it is in the air, and angling a spiral into your receiver’s hands is a very gratifying experience.  The game also has a leveling system in which you advance from rookie, to starter, and so on.  It encourages you to build a career, unlocking extra modes as you play, awarding you achievements, and recording all of your stats. 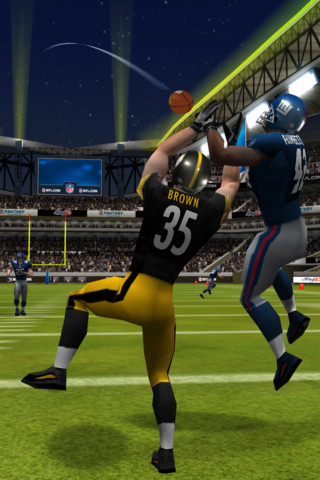 The biggest drawback to game, in my opinion, is the widely varying difficulty.  In the Playmaker mode, I found that it took a long time to feel challenged.  Until the computer AI kicked in, every pass was a completion, and every play ended with a touchdown.  The touchdown dances, while entertaining, can get monotonous after awhile (Protip: tapping the screen will cancel the touchdown celebration).  There is also, inexplicably, no way to exit a round once you’re in one.  Pausing the game only gives you two options: continuing or restarting.  While not a game breaking bug, it was still rather annoying.
I had a lot of fun with NFL Flick Quarterback.  The game does an excellent job of capturing the magic of the gunslinger quarterback, and reproducing it on your mobile device.  And at the low price of 99 cents, it should be a no-brainer for any NFL fan.  If you can put up with an occasionally inept computer opponent, I think you’ll have a lot of fun too. Not enough fun to last the six months until real football returns, but it’s a start.
I give NFL Flick Quarterback an 8/10