Scribblenauts Remix for iOS lets you play as Maxwell, whose notepad will create any object you can think of.  Well most objects anyway, you can’t produce trademarked objects or anything that couldn’t be shown on pre-primetime television (sorry phalliphiles).  Maxwell uses these objects to complete objectives and to collect Starites, which serve as the goal object in every stage.   The scenarios are pretty creative and they vary from filling an aquarium with five different ocean animals to creating an extinction event to kill off the dinosaurs.

These puzzles are a mix of the puzzles from Scribblenauts and Super Scriblenauts released on the Nintendo DS.  Given the price for this version of Scribbenauts is only $5 US ($5.50 AUD), this is an incredible deal since your wallet would take $42 worth of damage on Amazon to get both.   The stages are short and perfect for a pick up and play session that only lasts a couple of minutes.  There are 10 stages per level and the earlier levels will take less than a half hour to knock out depending on how ridiculous you want to get. 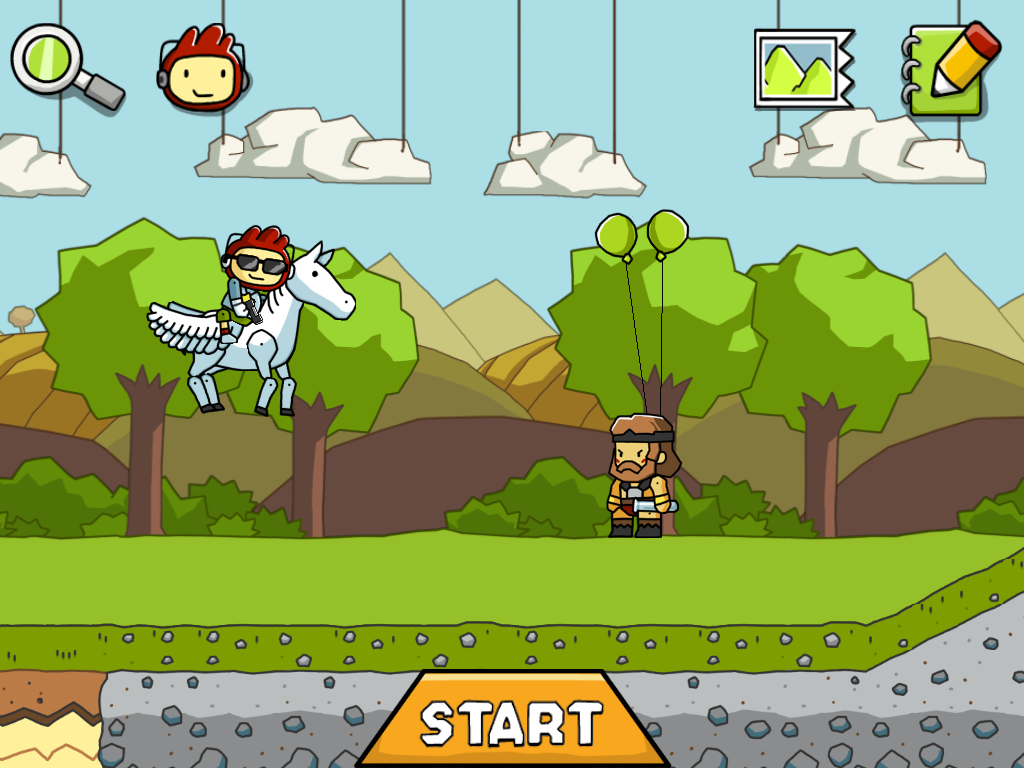 (My brand of ridiculous: Awesome Maxwell wielding a tiny pistol while riding a Pegasus fighting a mid-air battle against a balloon supported barbarian whose weapon of choice is a vial of acid.)

Before Scribblenauts was released for the DS there was a ton of hype surrounding the amount of objects in the game.  It seems like everyone who reported on the game had their own word that they wanted to try (mine was sphygmomanometer).  Clearly the word list and their associated properties is Scribblenauts’ greatest strength.  Every object you create will have a set of properties including things like weight, flamibility and so on. Some of the scenarios hinge on using these properties.  Need to cross a body of water with sharks in it?  Drop a lightning bolt in there and watch the stage become much easier.  Sometimes the objects’ properties will interact with each other in unexpected ways causing a chain of events that will cause you to start the stage over again.  This is frustrating, but given the length of the stages, a setback like this won’t cause you to fling your iOS device across the room.  They also added the adjectives from Super Scribblenauts, giving you a chance to modify your objects as you see fit. 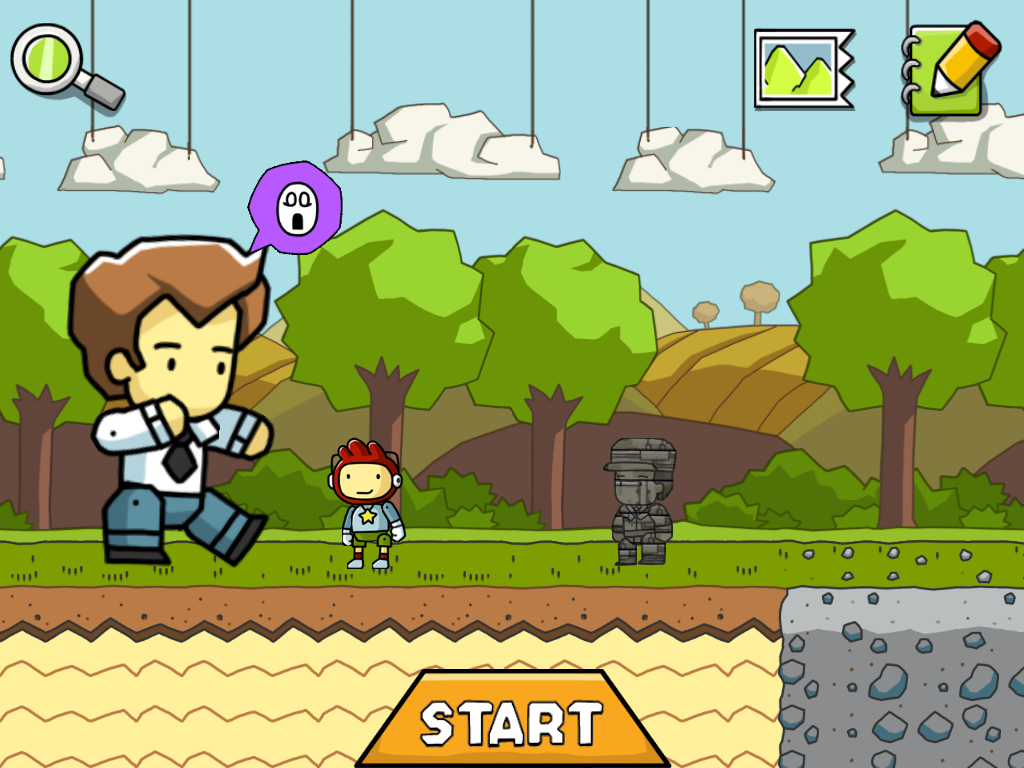 (This “Mega Man” vs “Bionic Commando” fight isn’t as cool as I imagined when I was nine.)

Despite having almost anything imaginable at your fingertips, you will eventually find a regular set of objects that are reliable enough to warrant repeated use.   Avoiding this rut is the key to enjoying the Scribblenauts Remix experience.   Another issue that you will face will be the controls, the default controls move Maxwell in whatever direction you are pressing on the screen.  This makes it confusing to try and select objects in the environment leading to cases where Maxwell or an ally dies while running towards the object you just made while you are trying to manipulate it.

This was the case in the original DS game and 5th Cell paid attention to the complaints, changing the controls in Super Scribblenauts allowing you to use the d-pad to control Maxwell.  This functionality is also in Remix by way of dual virtual joysticks which solves the problem of moving Maxwell, but creates a new problem by not being very comfortable to use for long periods of time.  The joysticks are located near the bottom edges of the screen and such a low grip causes the iPad to feel top heavy.  This is compounded by the notepad remaining at the top corner, which leads to holding your iPad by the very corner with your left hand.  One final complaint about the controls, when typing out what you want, sometimes the key flashes but the letter does not register.  This is only a minor point because something like that is certain to be fixed in a future patch.

Aside from having no comfortable or reliable way to control the game, 5th Cell delivers the best version of Scribblenauts at the best price.   It is a game where you are limited only by your vocabulary and creativity.  The sandbox mode alone would be worth the $5 they are asking, but the 50 puzzles they add to it make this a steal.   There is a DLC pack of 20 levels available for a dollar.  My suggestion would be to just go all in and pay the $6 for 70 levels.  Buying them separately seemed a little bit of a letdown.

Share your experiences with the ridiculous combinations of objects in the comments.