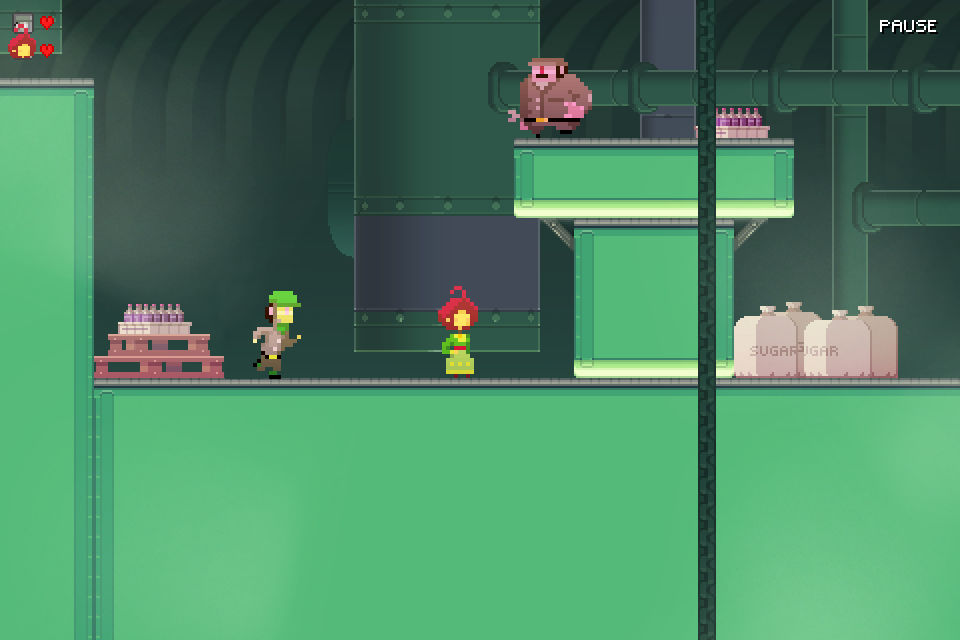 If you haven’t seen me around the internet this weekend it’s because I finally picked up  the game Super Lemonade Factory on my iPhone from Initials.

My motivation to play iPhone games is often lacking.  I tend to listen more to music or something when I’m on my commute as things tend to be crowded and the last iOS game I played had me elbowing people left and right.  Luckily, Super Lemonade Factory is a pretty stationary experience, and one that managed to keep my attention transfixed on it for quite some time.

Super Lemonade Factory is a 2D platformer with puzzle elements.  These are really a dime a dozen these days, but this one has the added charm of teamwork.  It’s not a coop game, but the player does control two characters: Andre and Liselot.  Each has their own unique set of skills that the player needs to employ to get them through the lemonade factory while collecting lemonade bottles and generally avoiding giant spikes and factory employees.

Nevermind that there are huge spikes, floating platforms and factory workers that get in your way and “kill” you.  It’s not important, but it does make the game a game.

The first couple levels I played of Super Lemonade Factory didn’t really grab me.  It seemed a standard kind of jump over this, avoid this, push this kind of platformer.  As I progressed however, there was a real charm to the game and I found myself really engrossed in the increasingly difficult puzzle solving  process.  I also found myself kind of loving the married couple teamwork aspect.  Sure it’s a simple premise, but it made me smile.

Andre and Liselot are a married and running a soft drink factory in the post World War II era.  There are underlying themes in the game about gender roles and labor relations, though those are subtle and mostly the player is just trying to get through the factory to the exit making use of crates and the no doubt special bond that Andre and Liselot share.

There are 72 levels in the game, 36 normal difficulty and 36 “hard core” difficulty.  I’m not nearly through most of any of these, but I’ve certainly enjoyed the  levels I’ve played.  The difficulty of the puzzles increases just a little with each level and there is some head scratching and imminent failures before the player figures out exactly what to do.

The chip-tune soundtrack is really cute and the animation, while simple is charming (I found myself giggling at Liselot’s hair).  I also appreciate that the controls are very easy to use – Forward backward, jump.  The movement on a touch screen is something that seems difficult to get right in mobile games and Super Lemonade Factory nails it.

Super Lemonade Factory is available at the iTunes app store for $1.99 and if you’re looking for a charming, straightforward, beautifully simplistic game with fun music and easy controls, this game is one you’ll want to pick up.