Unless you’ve been living under a rock for the past couple of years (and since you’ve found your way to this article I’m going to assume that you haven’t) you’re probably aware of how hot the mobile gaming market is right now. I believe the phrase “blowin up” would be an apt way to describe it. But this huge explosion in mobile gaming has led to some problems. Most notably, deciding what games to spend your hard earned money on. One such game I would highly recommend you picking up is a quirky little nugget of fun called Superbrothers: Sword and Sworcery EP by Capybera Games.

This is usually the part of the review where I introduce the reader to the game, beginning with what type of game it is. The problem here, though, is that I’m still not entirely sure which genre Sword & Sworcery falls into. This is a game unlike any other you’ve ever played on a mobile device, and it will challenge your preconceptions of what a mobile game can be. OK, that might’ve been a bit of a stretch. But still… this is one uniquely cool game. You play as The Scythian, a warrior from a distant land in search of a powerful book known as the Megatome. It’s not a spoiler to say that you complete your quest fairly early in the game. But removing the Megatome from it’s hiding place causes the proverbial poo to hit the fan, and it’s up to you fix the problems you’ve caused. Sound familiar? It should because it is. But don’t bail on me yet. On the surface, it is very much a spiritual successor to the original Legend of Zelda for the NES. It’s highly pixelated graphics, and the simple quest-based adventure storyline will surely please fans of the 8 bit classic. The quest of the Scythian, however, is actually not the focus of the experience. Instead, this is one game where the presentation is everything. 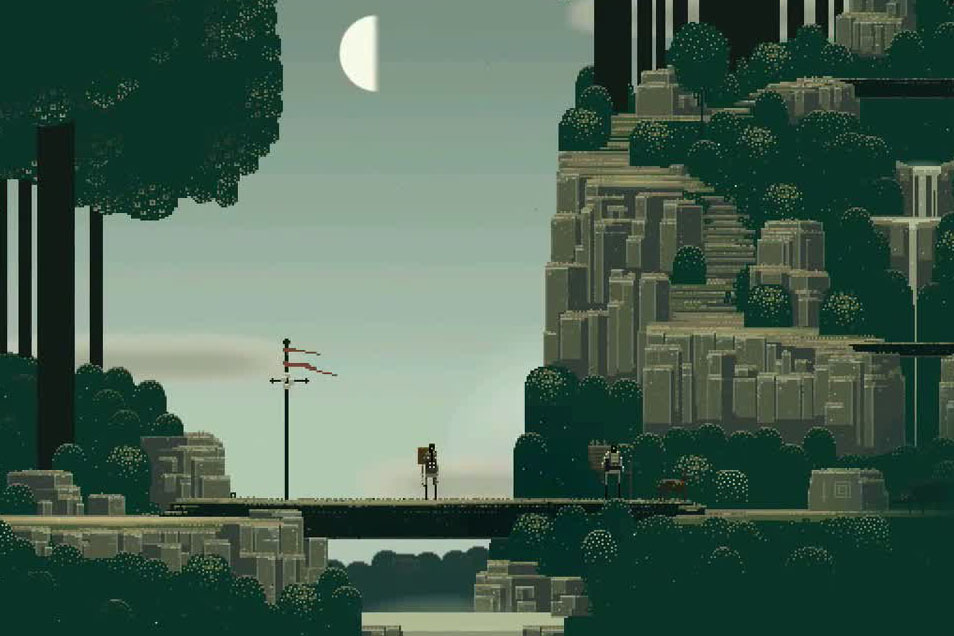 Of note are the instructions given to you at the beginning of the game: Look, Listen, Touch. Playing Sword & Sworcery is truly is a multi-sensory experience, and paying attention to the visual and auditory clues within the game are vital to your progress through it. The graphics, while simplistic by today’s standard, are nonetheless stunning. The landscapes you venture through are brimming with life, and you will encounter everything from roaring waterfalls framed by rainbows to families of ducks skimming across the surface of moonlit ponds. And I dare you not the weep at the splendor of an antlered stag disappearing into the forest as it flees from your approach. But the visuals are far more than just eye candy. Puzzles abound in this game, and paying close attention to what you see, and where you see it, are key to your success. In addition to exploring and puzzle solving, the game will also occasionally shift, or should I say tilt, into combat. While most of the game is played in landscape mode, battles are fought holding your device vertically, which provides a striking visual break from the majority of the game. Early encounters are quite simple, and seem to merely serve as a diversion to break up the gameplay. But a few of the boss battles were surprisingly involved, requiring quick pattern analysis and even quicker reflexes. But this is not a game of punishing combat. The engagements are always winnable, and are presented with just as much (if not more) visual and musical flourish as the more relaxing exploration segments..

Beyond the gorgeous look of the game, the music, written and performed entirely by Jim Guthrie, is the real star of the show. Along the way, you’ll hear everything from plucky folk guitars to ethereal choirs, and it is all performed with a sophistication and warmth that is both unexpected and enchanting. There were many times when I would simply stop playing, and listen to the music instead. Sound is literally the soul of the game, and it could not be played without it. The music not only provides the emotional backdrop to the story, but it also has a central role in the gameplay itself. Most puzzles have an auditory element, and learning to listen for clues is something you’ll pick up early on. Not to belabor the point, but the soundtrack to Sword & Sworcery is amazing, and easily the best I have ever heard on a mobile game. In fact, it stands with the best gaming soundtracks, regardless of platform. So it is no surprise that it is available as a digital album for $7.99, a relatively cheap price for such a stunning work. This concludes the gushing segment of the review.

Another enjoyable aspect of Sword & Sworcery is the game’s sense of humor. The Scythian, as well as the various characters she meets, all share a sarcastic wit, and the narrative never takes itself too seriously. The characters in the game will occasionally appear to be very much aware that they are in a virtual world, and are being controlled by someone else. The Scythian’s continuous inner monologue will often include such fourth-wall breaking witticisms as “We were like groan not another fetch quest amirite?” and “We found a few worthless sheep lazing around in the meadow.” The winking humor of Sword & Sworcery offers many laugh-out-loud moments, and adds an extra dimension to the characters within, giving them a life that the simple storyline never does. 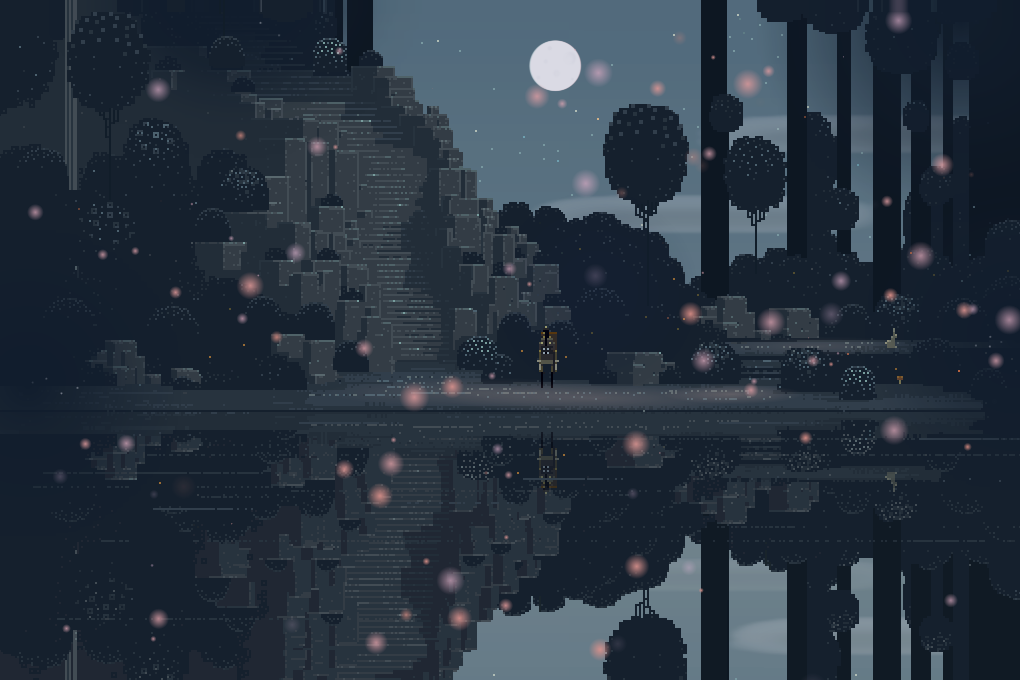 Now, for the not-so-great part. This game is an iOS exclusive, meaning it can only be played on Apple’s line of mobile devices, namely the iPod, iPad, and iPhone. So everyone using Andoid or Windows Phone 7 are out of luck, unless they happen to have a friend with both an iDevice and a generous personality. Also of note is the battery power this game requires, which is a lot. Actually, that’s an understatement. Sword & Sworcery will not only kill your battery, it will defile its corpse. I was barely able to get 30 minutes of playtime on my iPod before it died. That being said, my iPod is well over a year old, and there is a chance players with newer hardware will experience better results. One other word of caution: you need to play this game with headphones. Seriously, don’t even bother playing without them. The music is too good, and too central to the experience, to listen to it through your device’s built in speakers. 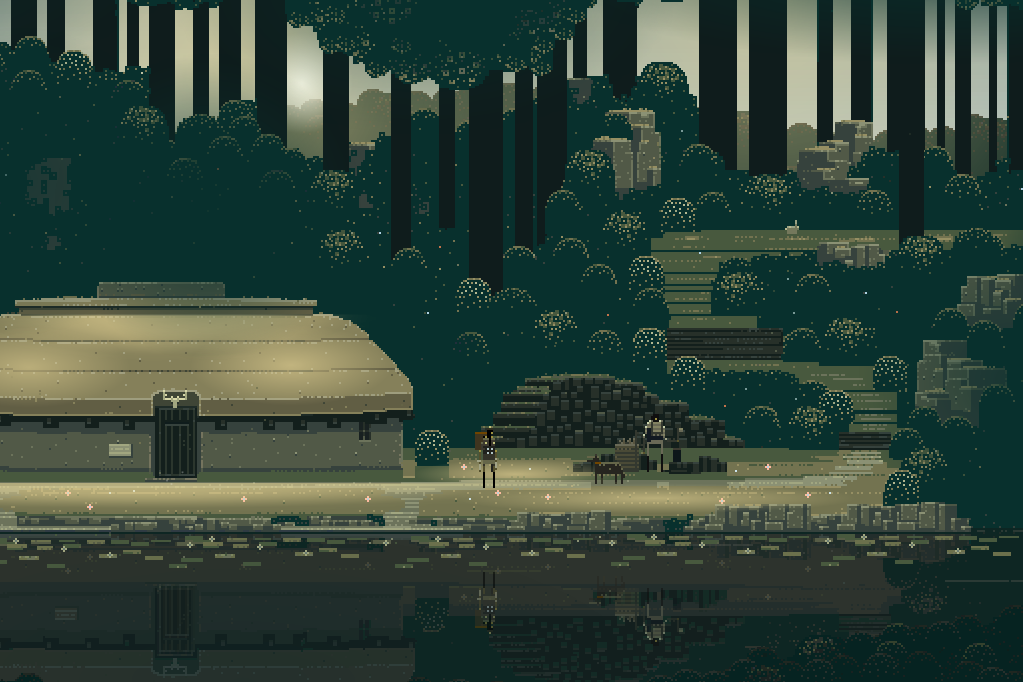 Aside from those drawbacks, the game is a wonderful piece of work. Broken into four “sessions,” the game constantly autosaves, and is perfect for being played in fifteen to twenty minute stretches. Made with equal parts beauty, wit, and love, it exists in a whole other realm beyond most mobile games. A true visual and musical work of art that just happens to be very fun to play. Superbrothers: Sword & Sworcery EP is available in the Apple iTunes store for $4.99, and I highly recommend buying it if you can.