It’s a rare game that manages to combine excellent gameplay with an outstanding sountrack, eye-watering graphics and solidly implemented social features to create an addictive experience you keep wanting to return to. It’s even rarer when this game manages to achieve all those things on a mobile platform. Need for Speed: Most Wanted on iOS by Firemonkeys does just that, and it does it in style.

Let’s be honest – the Need for Speed series has had a mixed reception as of late. The last few iterations of the popular racer have received both praise and criticism, and the series itself has sometimes felt like a one-trick pony. Previous developers have tried to re-invigorate the series with new additions to the usual fare, and sometimes complete shifts in focus. But the previous games, whilst solid attempts, have never quite rediscovered that Need for Speed magic of old.

Enter Firemonkeys who, in their work with the iOS and android versions of the game have created a spectacular racing experience which every racing enthusiast and Need for Speed devotee should own. Everything you could want in a racer is present and accounted for. So let’s tick them off one by one.

Graphics wise, the game is gorgeously stunning. Each of the 30+ cars featured in Need For Speed: Most Wanted on the iOS hae been recreated in all their splendor and they look amazing, both in the garage and on the streets. There’s a variety of cars on offer here, from muscle cars, street racers and exotics, ensuring there’s a car just right for you regardless of your playstyle. The enviornments and streetscapes these cars race through provide a perfect backdrop to showcase the main drawcard – the cars – and yet the environments impress on their own. Each streetscape has its own look and feel, and its the small things that Firemonkeys have included that make this experience memorable – the reflected sunlight on waterdrops or on the streets themselves; the nicks, dents and sometimes huge cracks the cars suffer if you get a little too aggressive with cops or other racers. The passion and dedication to create the most polished racing experience is clear to see, and it makes playing the game all the more enjoyable. 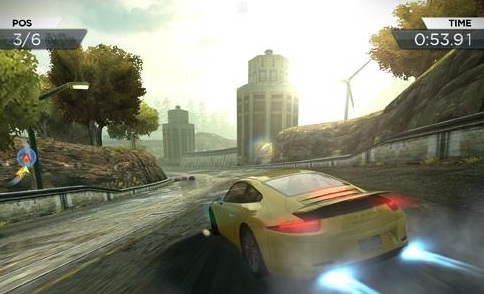 The sounds in the game are a standout – Need for Speed Most Wanted on iOS features the best list of songs I have heard in a racing game. Every song fits perfectly into the heart-racing, frenetic action unfolding on screen, and there is a nice mix of old and new songs. The strength of the track list means that you’ll catch yourself grooving along to the songs playing in game, and you’ll be looking forward to, rather than skipping tracks. The sounds of roaring motors and cars zooming along the city streets are likewise impressive – the roar of your car’s engine is a beautiful thing to hear, and I especially enjoyed hearing the engine sounds change as my car took damage. You can really hear the car struggling the more damage you take, and this is also reflected in the way the car handles.

When you’re behind the wheel of a pristine, undamaged car, it handles beautifully. Firemonkeys have done an exceptional job in translating the console controller experience to a handheld mobile platform. You have a choice of two control modes – tilting the iPad to steer, or touching and swiping the screen to steer. Both modes are intuitive and you never feel like you’re fighting to control your car – the handling is smooth and natural. Different cars feel and handle differently, with each car having its own strengths. The more expensive, higher tier cars offer the smoothest handling but even so – damage them enough during a race and you will feel a lack of responsiveness. This adds an extra challenge to the game which I found especially enjoyable.

With respect to game modes – Need for Speed: Most Wanted offers a variety of challenges. There’s hot ride, street race and checkpoint, and completing them not only unlocks more challenges, areas of the map and new cars to purchase, but also provides you with speed points. Speed Points are your street credibility – and not only will you need these for unlocking cars, but you’ll also require a certain number to challenge members of the Most Wanted Top Ten. These guys are the elite street racing champions you’ll want to beat beause they’re driving the best cars. In addition to unlocking and buying new rides, you can also buy and install mods for your car – these mods rangs from reinflating tires to impact protection and nitrous refuel. Each one will improve one aspect of your car, and it’s up to you which mods you choose and in which combination. These mods are a neat addition and allow you to customise your favourite rides to reflect your playstyle.

Given this is a Need for Speed game, during races you’ll not only need to stay ahead of the racing pack, but you’ll also need to stay ahead of the cops to avoid being busted. Both your other racers and the cops are merciless – they are completely focused on annihilating you and they will test your ability to take the lead and keep it. The AI for the cops and enemy racers presents a challenge and they will employ cheap tricks – but the challenge they present is never insurmountable or too frustrating and if you find yourself losing in a race, perhaps it’s time to put some money down to buy a new ride. Every time you place first, second or third in a race you earn money, so you’ll never feel stuck in not being able to progress through not having enough cash. 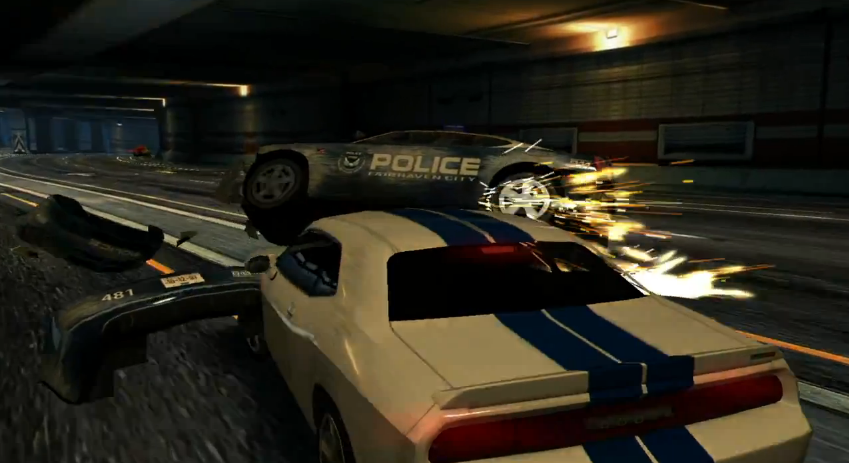 The races themseles are fast-past and frantic and feature the heart-pounding intensity of old school Need for Speed games, combined with the almost maniacal glee experienced when you successfully take down an opponent. No matter how many times you perform a take down, seeing it played back and watching your opponent meet their demise never gets old. Need for Speed: Most Wanted on iOS combines all the great hallmarks from both the Need for Speed and Burnout series’ to create an experience which is as addictive as it is enjoyable.

But what makes the game stand out from others in the same genre is the seamless inclusion of the social elements via the Autolog feature. Playing this game with friends elevates the game from a great experience to an addictively unforgettable one. The way Autolog is woven into Need for Speed: Most Wanted on iOS is nothing short of masterful. As soon as you or any of your friends start playing the game – the challenge has been set. Through Autolog you’re able to challenge yourself to beat your friends race times. This makes the addictive gameplay even more addictive, since beating your friends time will not only provide you with the satisfaction – it will also give you bragging rights. Autolog ensures the first thing your friend sees when they log on and check their times is that you’ve beaten their effort. And knowing they’ve seen that provides the sweetest tasting victory.

If this review hasnt made it abundantly clear – I’m having an insane amount of fun with Need for Speed: Most Wanted on the iPad. It’s the Need for Speed experience I’ve been craving for so long. To all those Need for Speed fans out there – remember that thrill you had evading cops in the original Most Wanted? It’s here. That edge of your seat racing excitement? Right here.

Need for Speed: Most Wanted for iPad annihilates every other game in its genre. Buy it. Treasure it. It’s an exceptionally realised, perfectly crafted game. Firemonkeys have managed to package all the iconic Need for Speed hallmarks into an easily digestible experience. I’d recommend this game in a heartbeat.