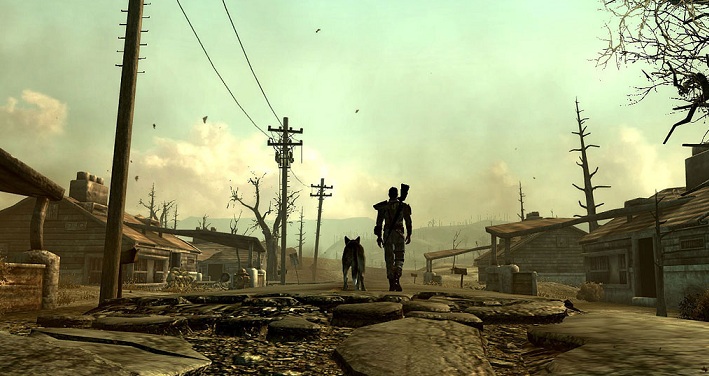 Fallout 3 received some acclaim when it was first released in 2008. With reviews in the 90th percentile, and a love of Oblivion/Bethesda, I was looking forward to playing this game set in post-nuclear, dystopian America. So after playing the game for a good several hours, I’ve resigned myself to the realization that I likely will not get any farther—nor pass—Fallout 3, due to a mixture of gameplay mechanics and my own personal frustration with it.

First note of caution: do not expect to have a wholly attractive Lone Wanderer; Bethesda managed to outdo themselves and make an even worse character creator than Oblivion. After some struggle attempting to get a character that would look decent, I resigned myself to the fact that my Lone Wanderer inherited bad genes. Optimistically, since the game is in either first-or-third-person perspective, you won’t have to look at your character a whole lot, except potentially when utilizing the Vault-Tech Assisted Targeting System (a.k.a., V.A.T.S; more on that later).

Character aside, the detail to the game is amazing. The world of Fallout 3 has so many details that it’s a wonder they were all put in the game. I can steal forks, drink from the toilet, and scavenge almost anything. I am astounded at how, in a short amount of time, I got sucked into the narrative via the atmosphere, music, and characters. Amidst the near-complete desolation of the Capital Wasteland, there’s remnants of music and adverts that remain of a blithe, idealistic society prior to the Great War. Even the gaming manual (or as Bethesda calls it, “survival guide,”) adds to the immersion. People, computers, and memos can be gleaned for minute details about characters and places that are superfluous, yet add a lot of depth. I found myself impressed and interested with the story. I do praise Bethesda for this aspect of the game.

Although many characters do suffer from the ambivalent ‘Oblivion face,” and could do with some better voice acting is generally quite well done, especially for more major characters. That said, I had some issues with dialogue; while some of the choices were very appropriate (such as “Gah! What the fuck?!” when talking to a ghoul in Megaton for the first time), others just seemed ill-suited. I wavered between being the responses being quite appropriate and amusing, and quirking my brows at the absurdity of others. Given the expansive nature of Fallout 3, I suppose limited dialogue choices are a fair enough trade off. You cannot travel to a place you have not seen, so this requires that you trek out across the wasteland. You can see pieces of wreckage and wire from abandoned settlements, the rust on a Nuka Cola machine. Quagmires of radioactive waste and twisted electric pylons can be had. The detail is amazing.

That is, if you can stand seeing the Capital Wasteland in all its lovely, sepia, monotone glory. This is the primary colour palatte for Fallout 3; other colours include various shades of grey and diluted, faded hues on clothes, as well as a hue of green that reminds me of my school’s old Mac computers. I like colourful worlds. I understand the world is recovering from a nuclear holocaust, but….could there not be some odd coloured people and places, distorted by radiation? Maybe rainbow oil puddles? Blue grass, an orange sky? Furthermore, colourful worlds make landmarks easier to distinguish. I understand others might not find it to be an issue, but it’s boring for me, and it bothers me enough for it to be an issue.

This is compounded by the fact that I die. Often. The game does its best to make sure you realize the Capital Wasteland is a fatal place. Enemies took chunks out of my health from their frantic bites and scratches. Attempts at running away were futile; of course, a 19-year old Vault dweller would not have as much exercise and strength against a super mutant, and, as it turns out, mutant moles. I think I would die less if more health items were abundant. Health items such as Nuka Cola and Stim-paks are hard to find, which requires a lot of looting or purchasing. Fallout 3 is a game hoarder’s paradise for weapons, clothing, and items, but scrounging for health items and caps is a nightmare. I generally suffered through my aches and pains and concussions, because free beds are even more scarce around the Wasteland; it’s an issue when sleep is a free, easy way to heal injuries, especially when most beds are owned. Doctor clinics are found in town, but they aren’t cheap. I remember backtracking for a good half hour, badly injured, looking for a bed I had stumbled upon previously, simply so I could face some raiders by a settlement called Arefu and save my Stim-paks and Nuka Cola for the future. Of course, I couldn’t find it because it was blended and buried somewhere in the game’s brown hues. 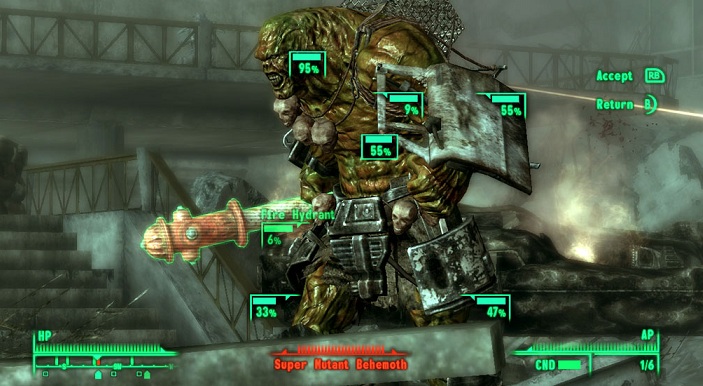 I did fine with crow bars and other melee weapons; however, my aim seemed to be quite off with guns. The V.A.T.S targeting system helps, assuming there is enough AP. It allows gamers to pause and strategically determine where to shoot on an enemy’s body, in the middle of combat; however, this is for ranged attacks only. When implemented, you get to see a slow-motion scene of blowing enemy heads off and their guts flying everywhere. Assuming, of course, you actually hit your target; even in V.A.T.S mode, sipping Nuka Cola Quantum to increase AP, locking on to limbs, and attempting to strategically injure an enemy…it is still possible to miss.

Did I mention I was playing the game on the easy setting? I am happy to be challenged, but I do not believe “challenge,” translates to, “near flipping impossible to get through.”

I can’t say I will be finishing Fallout 3 with the issues I have with it. It gets boring and frustrating to constantly die, and repeatedly trekking through the brown, dejected world. That said, there’s a lot of lore and depth to the story that can really pull a gamer in. I think it’s at least worth a rental for those who haven’t heard of it, and hopefully others can master the combat system and tolerate the sepia palette better than I can. They will find a rich game.