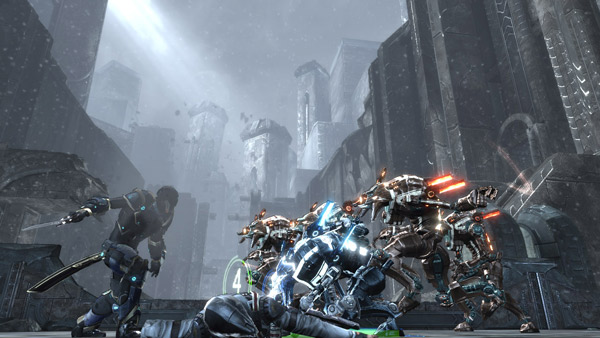 In the first of our ‘Old Game, New Review’ feature articles, Keller takes a look back at Too Human – a game that received its fair share of attention back when it was released in 2008.

Too Human does a lot of things right to pique my interest and keep me playing; on the flipside, it admittedly has quite a number of flaws. These flaws are rather dismissive earlier on in the game, but quite evident and inescapable later on. Nevertheless, if you can push past them, you might find yourself having quite a bit of fun.

If you’re familiar with aspects of the Norse gods, then you can probably infer some aspects of Too Human’s story. This is, however, Silicon Knight’s own interpretation; the Aesir are worshipped by humans partially because of their cybernetic enhancements, and the normal world is composed of machinery and cyberspace, and it was interesting to see what aspects were transferred over and adapted for Too Human. Another aspect I enjoyed was how the plot takes a while to be revealed. It’s inferred, both in the manual and game, that Baldur was in an accident, but by whom, how, where, and why take a bit of discovery and time. By not laying all the cards down on the table, it keeps my interest piqued.

The soundtrack was an immediate hit with me. I found myself wondering if I could download it from iTunes; while the music does often repeat, I found it so suitable to the environment, so engaging, that I didn’t mind at all. It was beautifully orchestrated and definitely one of the game’s highlights. The voice acting is rather well done; when you’re leading some squads into battle, you can hear your comrades talking among themselves and sprouting quips such as, “Bad guy, this is gun,” which helps the game seem alive. The only thing that seemed odd was how I thought I kept hearing Oghren (from Dragon Age: Origins), and discovered his VA is in this game.

The issues I have with Too Human can be sorted into two categories: the camera and the combat.

The right analog stick is used for your sentient melee weapon, Fenrir. This provides you with the opportunity to swing it around continuously without button mashing, and it works quite well in that regard. Unfortunately, with the analog stick occupied, this leaves the camera rigid and almost non-existent. You can refocus your direction by pressing the LB button should you change position (which will be often when you’re fighting), but the camera will then remain fixed until you change it again. It takes a while to get into a groove, and while I often accidentally brandished my melee weapon—forgetting it wasn’t my camera—combat is not impossible.

There is the opportunity after battle to rotate the camera and look at your surroundings, if you press and hold LB while rotating the analog stick. Unfortunately, this feature is unpolished; more often than not I simply ended up swinging my melee weapon around. When it does work, the view is rather limited. This is a shame, because the environments are stunning. Silicon Knights built such a grandiose, colourful, immersive atmosphere, but between fighting with the camera and fighting with the enemies, you don’t get much of a chance to be enthralled. 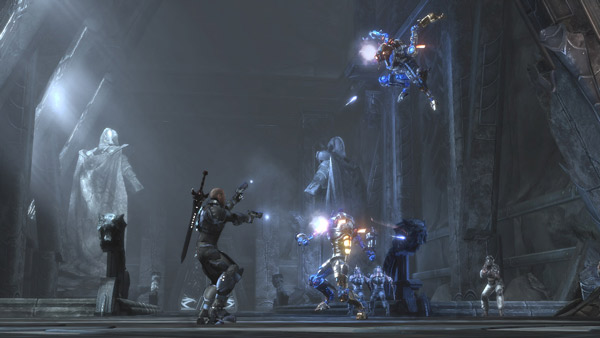 Close-up melee is rather fluid with the analog stick, but ranged weapon attacks are very frustrating. It will often focus on the farthest possible enemy instead of the huge, hulking mass charging right for you. I often thought I was focused on some dastardly enemy, only to discover that I was wasting my time trying to melt a generic, unthreatening rock.

You will die a lot in the game from the sheer amount of enemies that come and attack you, and while you can try to run away, they eventually overwhelm you. Your health will regenerate at a snail’s pace, unless you get health orbs…that you only get via combat. The enemies are always faster than Baldur, even when you get him to leap and roll away, and you can’t destroy them fast enough before they swarm and start pummeling you to bits. This is a flaw that doesn’t become evident until later in the game: while I did die a bit during the first part of the game, my death ratio exponentially increased in the next chapter.

On that note, there is a lot of criticism in other reviews for the Valkyrie retrieval of your body when you die. Personally, I had no problem with the animation; it takes maybe twenty seconds, and I found the sequence quite well animated and an improvement upon a generic, static loading screen.

The one thing this game does get right about combat: you never have to start battles completely over again when you die, though you do have to travel from the last checkpoint (which isn’t too far of a walk). I died several times during boss fights, only to discover that the HP damage I had dealt remained. This is something I appreciated about Too Human.

Though Baldur is the main protagonist, whom you can customize with whatever armor, weapons, class, and specs you find, I never got attached to him. I understand he is supposed to be the most beloved of the Aesir, he’s devoted to his wife, Nyanna, but he felt like a rather generic protagonist. He does speak, but when he did, I ended up liking him even less. In fact, I felt more interested in some of the secondary characters, such as the NORNs or Idunn.

I realize Too Human looks bad when I’ve spent the majority of this review going over its flaws. But despite that, I found myself persevering through the combat, interested in what would happen in this fictional world with awesome music. If you are able to forgive the combat and camera—which may be very hard to do in some instances—you might find the game enjoyable.