Professor Layton and the Last Specter was originally released in 2009. Apparently Japan liked the game so much they kept it to themselves until a last few months.  I must say that I can’t blame them.  This game is quite a gem, and a refreshing change of pace than more combat-based games than I am used to.

Although it is the latest game in the series, it is the first chronologically.  My interactions with earlier Professor Layton games were brief and vague at best, so this game is a great re-introduction into the series for me, and I surmise would be a great introduction for newcomers too.  In The Last Specter, Herschel Layton receives a letter from his old friend who pleas for help to solve the mystery of an attacking Specter. The Specters are large guardians for the inhabitants, summoned in the past during times of need; instead of helping the citizens this time around, the Specter wreaks devastation upon the townsfolk and buildings.  Upon the discoveries of a child who can predict where the Specter will hit next, and that it wasn’t your old friend who sent you the letter asking for aid, it is up to Layton and his companions to uncover the secrets that lead them all around the town.

The dual screens of the DS work well for this game. The menus and interactions are all done on the bottom, and the top either provides instructions for the maps, puzzles, and menus, or images that expand the town’s atmosphere during interactions.  Every interaction is with the stylus and I have yet to use the D-pad.  You poke all around the screen to find hidden items, such as coins and puzzles, or to interact with people who will usually give you information (but not before solving a puzzle).

Solving puzzles takes up the majority of the game, and there is a wide variation in type and difficulty, wrapped up in the awesome narrative of the Last Specter.  There are more than 170 puzzles, some hidden but most encountered via the main quest.  Sliding puzzles, mazes, riddles, logic puzzles, math; there’s a multitude to keep you interested but it is undoubtedly the most baffling aspect of the game.  Sometimes the answers are obvious, other times they come from out of the blue and I wonder how on earth *anybody* could find out the answer.  Coins are used to purchase hints, but there is a limit of four hints for each puzzle.  I don’t like to access the hints unless I am absolutely stumped, and I suppose it was too much to hope the game would assume as such.  Many of the first two hints were along the lines of, “Look at it a little harder,” or, “See it from a different perspective.” 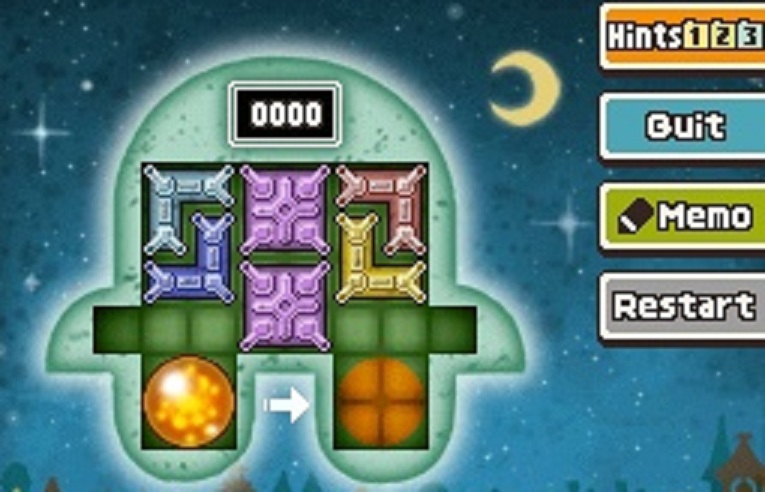 Level-5 graciously allowed gamers to quit their puzzles when they wanted, and if you happen to skip any puzzles once progressing into a different chapter, then a cat will collect them for you (yes, a cat), and you can find him around town and tap him to complete those puzzles you missed.

Each puzzle has a certain number of picarats attached to it, and earning enough of these babies unlocks bonuses for the player.  You can attempt a puzzle as many times as you like once you pass it (in your menu), and if you get a wrong answer you can always retry it albeit with a slight penalty of losing picarats.  However, the picarat reduction stops after two retries, and after that you can attempt the puzzle as many times as you want without having to worry about a reduction.

There are cut scenes and videos that help progress the story and appear frequently enough, but the majority of the game is spent reading either dialogue or instructions.   That does not mean the cast of the Last Specter is flat, however.  Each character has quite the personality, from Layton’s gentleman way of speaking to Luke’s precocious nature to a random cantankerous candy seller, and there is always somebody to talk to within the interesting, colourful cast of characters.  When there is audio for the voices, they are quite suitable.  I especially love Professor Layton’s voice, simultaneously nasally and low timbered.  Videos are voiced.  Cut scenes occasionally are, but I wish Level-5 had chosen to either voice all or none, since they are simply extended dialogues without puzzles.  I was left wondering why an encounter with a character called the Black Raven got a voiced cutscene, but Luke talking to his old childhood friend did not; both are important plot points.  As such, I got the nagging feeling that the game was half-finished, and wished there had been more consistency in that regard.

As I said earlier, the narrative is great.  But it is short.  My friend (whose DS I borrowed to play this game) was able to complete the Last Specter in less than 15 hours, and she surged through the main quest.  Even with the speedy playthrough, the puzzles take up the majority of the time, as does the discovery of clues, so the action part of tracking down people and places to get information gets a bit tedious and the story itself is linear.  You cannot enter some areas without solving mysteries or exploring an area thoroughly.  There are some extra aspects such as collectible items, games, and even something called London Life that I have yet to try, and once puzzles are completed you can access them in the menus to replay. The extras don’t feel tacked on, but they don’t provide enough substance for me to rave about.

This game has made me consider purchasing a DS so I can play the games, but while it certainly pleased me, I would not recommend it for everybody.  The narrative and characters are great, and the DS interface is so easy to handle, but it takes a lot of patience to progress through the puzzles and stories, and there’s a lack of extra activities outside of the main story. Professor Layton and the Last Specter is perfect for those looking for something different, or people who want to kill time and nurse brain cells by doing some mental exercises.  Play it next to family members who believe video games rot your mind.