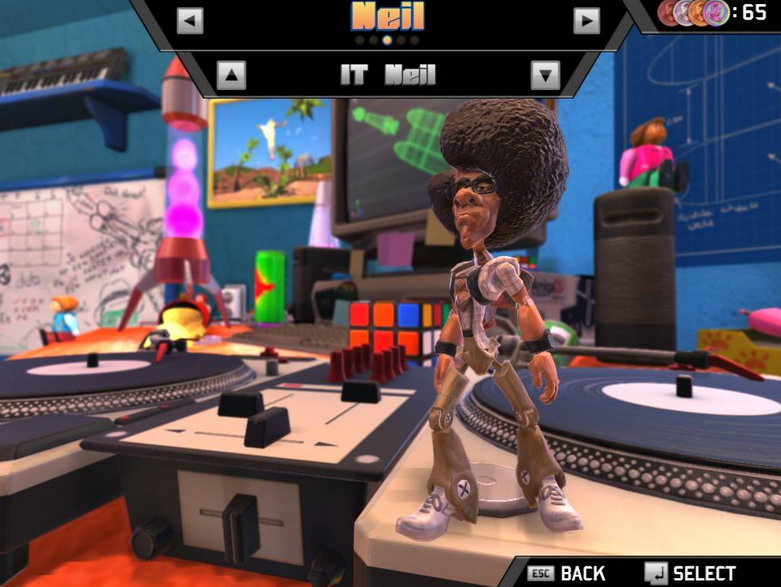 “Ready?! GO!” If you’re planning on playing ‘Action Henk’, be prepared to hear these two words over and over again. Action Henk is a 2D time trial racer reminiscent of Sonic where you race around tracks constructed from toy car tracks, blocks of wood and jack in the box jumps as garish 90s inspired action figures. The tracks are short but you will spend plenty of time trying to complete the perfect run with every minor mistake making you instinctively hit the reset button to attempt the track all over again. However, instead of utilizing moves like Sonic’s spin dash to launch you around the track, the main trick in your arsenal is the butt-slide. Pun absolutely intended.

You play as the overweight, Hulk Hogan/Super Mario looking self-titular character Action Henk as he races against the clock, gaining momentum and defying physics in an attempt to defeat the evil Dr.Kentony for reasons the game’s sparse cut scenes never fully explain. If the cut scenes aren’t motivation enough to thwart the horrible Dr. Kentony, he sports a Hitler-esque moustache and hairstyle and always carries a briefcase of money with him.
If that’s not evil enough for you, then Action Henk may not be the game for you. Fortunately, this lack of narrative is inconsequential and doesn’t detract from the enjoyment of the game, as the focus of a game like this isn’t the narrative but the gameplay.

Action Henk’s gameplay consists of one basic principle and that is how fast can you get to the end of each course. An action (no pun intended this time) that is ultimately a lot easier said than done. As you race through the course, you’ll need to keep your momentum going, landing jumps faultlessly, butt-sliding around slopes, perfecting wall-jumps and knowing exactly when to get off your butt and run. Later on in the game, a grapple hook is introduced adding a completely new dimension of gameplay to courses. There are also, like any good racer, alternate routes that can shed a couple of seconds off your overall time. This is where the games replayability flourishes.

For every track there are medals you’re awarded depending on your overall track time. For example, finish a track in 30 seconds and you’ll be awarded a bronze medal, finish it in 25 seconds and you’ll be awarded a silver and so on. Adding a sense of urgency to each track is the ability to race against a ghost that corresponds to the time needed to beat to earn a particular medal. You can also race against your personal best and your friend’s ghosts if they happen to own the game. Or you can beat them in real time as the game also has online multiplayer. The ghost for each medal is a great addition as it gives you an immediate visual confirmation of whether or not you’re on track to outdoing the time you’re trying to beat.

Once you submit your time you’re presented with a leaderboard for that particular track. On the leaderboard it shows how you stack up against other players and what percentage of players your time is better than. This is the most disheartening and rewarding part of Action Henk. A few times I would finally achieve a time I was proud of only to find out that my time was below the average. On every tracks leaderboard don’t be surprised to see the username ‘Qwertzoi’ sitting on top of it. Qwertzoi dominates the leaderboards to the extent that the game acknowledges his dominance in one of the loading screens with the caption ‘Is Qwertzoi still number 1?’ After doing a quick Google search of the username, it turns out Qwertzoi is a politely spoken German whose Youtube footage of him playing Action Henk made me want to put down the game all together. Watching Qwertzoi’s videos did however display the game’s great mechanics and the importance of timing. The controls are extremely responsive and any misstep on a course is in no way a fault of the controls. If you make a mistake, you have no one to blame but yourself.

Aesthetically Action Henk looks great. Growing up in the 90s, the games retro visuals gave me an instant feeling of nostalgia. Vibrant colours paired with larger-than-life character and level designs reminded me of one of my favourite games to play as a kid, Playstation’s Hot Wheels Turbo Racing. It’s through its character design that a lot of the games sense of humour is conveyed. Along with Henk, you’ll unlock other playable characters that also have unlockable skins. For example once you unlock Dr.Kentony, if you fall off a course 100 times you unlock the skin of Two-Face from Batman due to the floor being made of ‘lava’. My favourite character to play with was Neil due to his great variety of character skins. Neil’s skins range from an astronaut, to a look alike of Moss from the I.T Crowd and my personal favourite, zombie Michael Jackson dressed in his iconic red leather suit from the Thriller film clip. Whilst I enjoyed some of the character designs and I appreciate the game’s light-hearted tone, some of the character’s designs rely heavily on stereotypes (e.g. A Rastafarian smoking a giant joint), which felt a little uninspired coming from a game brimming with creativity and originality.

The soundtrack is a blistering force of synthesisers and electronic kick drums that will immediately put you in the mindset of the game’s mantra, ‘Momentum, momentum, momentum!’ About halfway through the game I decided to listen to my own music while playing and I actually felt like it detracted from how well I played the game. It could have been purely psychological but as soon as I reverted back to the games soundtrack I immediately passed a level I had been struggling on for over thirty minutes. To me, the fact that I felt that was the ultimate testament to the effectiveness a fitting soundtrack can have to the overall experience of a game.

Action Henk is an intense racing platformer with tonnes of replayability and extremely rewarding gameplay. The feeling of pulling off a perfect loop de loop or just narrowly beating a previous personal best time is an addictive feeling that has kept me coming back constantly. So far I’ve hit the track-reset button 3,498 times and I plan on doing it a whole lot more in the near future.