I have a confession. Actually, it is more like a confession to an addiction. Animal Crossing has its hooks into me in more ways than I would like to admit.

What is worse: I knew this was going to happen. I have put more time and effort in maintaining my Animal Crossing towns than I have some relationships. With the Gamecube version I spent my days digging up fossils for a long completed museum, sending letters to my animal friends that contain in-jokes…and usually a small amount sexual content. I would take the train to my other town that was set six months earlier so that I had another season to play with. The small amount of dopamine release when I would catch a coelacanth was enough to become an addict.

What I am trying to say is that the original Animal Crossing had a stranglehold on my free time, and even time that wasn’t all that free. When the DS version came out, I held off purchasing it because I didn’t want to get hooked again. When the Wii version came out, I heard of all the similarities to the Gamecube version, which I could have played on my Wii so I did not pick up that one either. With Animal Crossing: New Leaf now available on the 3DS, my long dormant obsession returns, and once again…daddy needs his medicine.

If you have played any of the previous Animal Crossings, you have played Animal Crossing: New Leaf.  There are some welcome improvements which make the areas where it falls short frustrating. The first major change is the fact that the first character that comes into the town is mistaken for the mayor.  As mayor of your town, you can decide to spend your money on public works projects such as decorations or businesses. In addition you can set town ordinances which alter how your town behaves. This means you can set your shops to open earlier or stay open later, bending the town to your schedule. However, the right move is to just set it to where you earn more money in the shops.

Everything costs a ridiculous amount of money in this game. Want a bench? Be prepared to spend more than what your starter house was worth to build one. This has led to something of a dilemma: do I just leisurely build and expand, or do I spend my nights hunting beetles worth 10s of thousands of bells to expand faster? My justification for the hours of beetle hunting is that everything is so expensive, that it would take much longer to get the things that I want. If I’m trying to build a café, while at the same time trying to pay for an expansion on the house, I could be in debt near a million bells. If the game presents you with an area where you can get around three hundred thousand bells in an hour, why wouldn’t I try and do that? 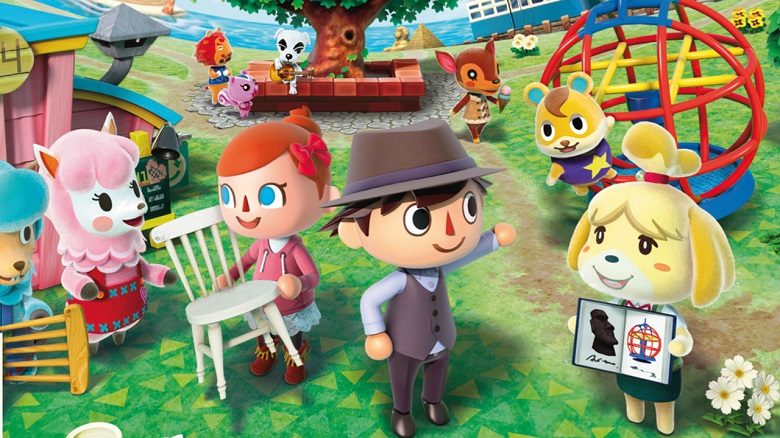 All the things you love about Animal Crossing are present and accounted for in New Leaf: you have daily activities such as fishing, bug collecting, and decorating your house with whatever you find that day. You have the little surge of bliss when you pay off your house, only to have it taken away when you find out how much the next expansion is. Personally my new favorite activity is to buy a fortune cookie with play coins I get from walking with my 3DS.  This also means that my coworkers think my new daytime walking regiment is tied to something silly like health and not something vitally important like a Super Mario Bros. flagpole.

The frustrating thing about coming back to this fourth installment of Animal Crossing is the things that bothered me from the first game are still bothering me now. Limitations on inventory means that I can’t just take my fishing rod, shovel, bug net, water can, and slingshot with me, because I won’t have room for everything that I catch, dig up, or shoot out of the sky. This means that I have to make several trips to my house each day to switch out items. At least I can move the direction pad right and left to swap out all hand held items in my inventory – that small improvement has saved me a lot of time spent in my inventory screen. Some of the changes do not go far enough, however, like the ability to stack fruit and bells into a single item spot.  This is a great feature, but would be made better by making the stacking automatic. Fruit from the trees or even the bell rock which can produce 8 bags of bells a day means inventory management to go in and stack before I can pick up more.

The constant inventory management and conversations that have you hammering on the A button just to advance microseconds faster are minor inconveniences in an otherwise great game. Whether it is the Nook kids, or the Re-Tail alpacas or your poodle secretary, they all have lines of dialogue that you will be reading over and over. The optimist in me would say that the repetitive dialogue and poor inventory system is meant to slow down the player to its pace, but the realist knows that it is just Nintendo’s philosophy of not understanding why someone would want to power through their game. Regardless of the minor problems I have with the game, however, it is still as fun and engaging as I remember it.

Animal Crossing scores a 9 out of 10.