Turn-based strategy games can be a mixed bag. If you don’t have a compelling narrative or something to pull the audience in, boredom can set rather quickly as you take your turn, wait a few minutes, take another turn, wait again…

The task for Daedalic Entertainment’s Blackguards 2 is even harder, given it’s not only based on the respected fantasy RPG The Dark Eye, but as a sequel it must improve on what’s come before it. Now I’ll admit straight off the bat that I haven’t played the first game, so I’m at somewhat of a disadvantage there. The game doesn’t hit you over the head with that though, and you can easily play through this without knowing anything that came before it.

The game starts off with a rather intriguing premise. You play as Cassia, who awakes to find herself at the mercy of a dungeon filled with venomous spiders and seemingly no way out. Through the opening few tutorial levels, you’ll watch as she changes from an innocent young girl wanting answers, to a betrayed and torn character out for vengeance. A few years of darkness and spider bites can do that to a person … apparently.

These opening levels set the tone rather well, but more importantly it allows you to shape her into your own image, be it a two handed sword wielder or a wizard of sorts. By employing this in its design, Blackguards 2 doesn’t simply throw at you the usual ‘class’ mechanic of other games of its ilk. It’s entirely up to you where your points go early on, which influences what you can do later on. I decided to stick with a spell caster at first, though I later added the ability to use a bow and arrow, and later still I added some experience into single handed swords. This enabled me to attain a fair balance of ranged and melee attacks plus the ability to heal up and deal fire damage.

The story kicks on from the opening levels, where you bring together a party (made up of characters from the previous game… I should really play the first one now, shouldn’t I?) and take the land for yourself. Tech trees for these follower characters are already set, so no modifying in your own image, but you can equip them in much the same way as Cassia herself, adding new weapons or armour that’s suitable to their needs.

Menu’s for a game like this can be rather confusing for a novice and sometimes even an experienced gamer like myself, but credit to Blackguards 2 for not being overly complex where it could have been. The layout itself is definitely detailed, but it doesn’t take much to figure things out. The only time I ever confused myself was when I was trying to figure out how to heal a party member. Whilst this wasn’t as obvious as I thought it would be, I figured it out all the same.

Right clicking on your character during combat brings up a selection wheel, which is divided into attack and defensive moves. That’s typical fare for most RPG games these days, but what I liked in Blackguards 2’s design was the ability to choose certain attack levels. Say for example, I upgrade my fireball attack to level 2, dealing greater damage but using more attack points in the process. Since you only have a certain amount of attack points per battle, it can be a pain when you can’t use that spell anymore. However, in Blackguards 2, you have the choice of using the weaker levels as well, allowing you to use say a level 1 fireball instead for fewer points, but maybe just enough attack damage to take someone out. Little details like this, and the games understanding of height and line of sight, made me appreciate the combat mechanics even more. Blackguards 2 isn’t the first game to use these mechanics, nor will it be the last, but there’s enough polish and detail here to ensure that every piece of the strategy puzzle fits together as it should. 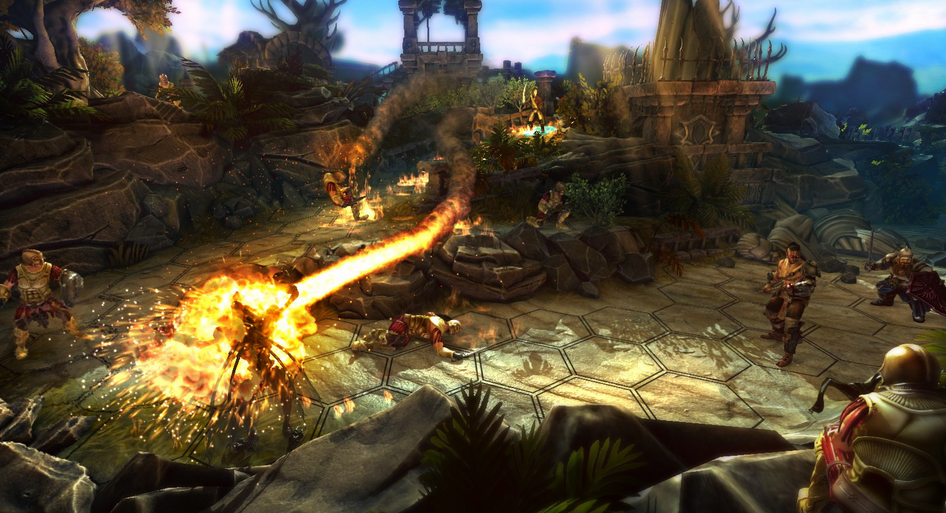 Ultimately, however, it’s the presentation that drew me in, though I’m not necessarily talking about the visuals. Whilst Blackguards 2 utilises a solid engine, with plenty of detail in the environments and characters, it does look a little bland at times. Blackguards 2 has a typical dungeon crawler kind of feel, with browns and blacks making up most of the colour palette.

It’s the presentation of Blackguards 2’s story that really got me hooked. The game plays with grey area in its storyline, whereby you as the player could very well be playing a villain rather than a hero, and playing through Blackguards 2 with this in mind can bring about a whole new perspective. It’s very refreshing not to be playing a hero who’s following a typical ‘chosen one’ quest line, nor having to save a damsel in distress.

The dialogue helps to push that narrative across thanks to plenty of well chosen voice actors. Dig a little deeper into each character you come across and you’ll be told stories of the kingdom, its history and mythology, all working towards engrossing you even further. Unfortunately, the same can’t be said for the musical score, which doesn’t differ itself from anything else within the genre and largely repeats itself over and over during combat.

If there’s a downside to Blackguards 2’s story, it’s pacing. As with all strategy games, you need to invest a lot of time and patience in order to be rewarded. You need to think about your next party placement or action before taking it, considering the consequences or watching where NPC enemies go next. Guess the wrong move and you’ll have to restart the level all over again. Whilst this kind of progression may put off those who are used to the run and gun styles of, say Dragon Age for example, strategy enthusiasts will feel right at home here.

If there’s one thing I wish all strategy games would apply, however, it’s a ‘skip’ function. Watching every NPC take their turns can be annoying, perhaps not early on as you learn their patterns, but certainly when it comes close to reaching the goal laid out before you. A few times I found myself groaning as all I had to do was move my character forward to an exit, only to wait as all the NPC’s tried in vein to catch up. A simply skip or fast forward option (not that I could find one, at least) would have been helpful.

When you put all of its parts together, Blackguards 2 is a solid and entertaining strategy game. It isn’t all that pretty to look at, but its story and characters are intriguing and its combat clever and well put together. It may be overshadowed by the bigger names of the genre or its more action RPG cousins, but don’t discount it based on name alone. This is well worth a look.