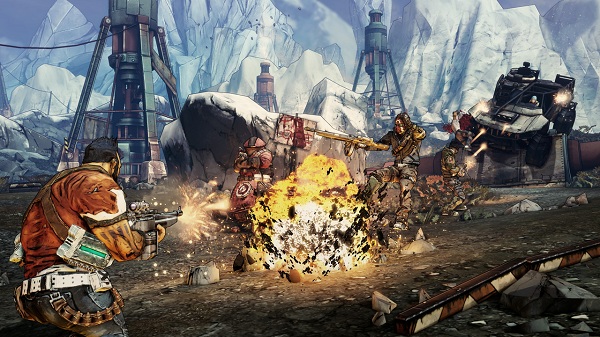 Oh Pandora, you’re still a crapsack world, but I love you. Of course, I can only express my love through violence…

Borderlands was one of the more confounding games of 2009 for the PC. There was a fair amount of clunk to it requiring some heavy tweaking to get it playing right, and the lauded co-operative play was initially a bitch to set up. But once you got past those technical issues, there was more than a little fun to be had there: a Space Western with elements of The Road Warrior that played it tongue firmly in cheek, and a metric fuck-tonne of guns you could use whilst playing with friends in four interesting and reasonably balanced classes cooperatively, Smurfette Principle aside. The co-op potential was what really hooked me, as I’d enjoyed my experiences in the Left 4 Dead series and wanted to try something different.

The admittedly thin narrative had amoral arms-dealer Marcus Kincaid telling a story to a bunch of kids about the legend of the lost alien Vault on the borderland planet of Pandora; an abandoned mining world left to rot; and the four Vault Hunters who eventually found it and defeated the alien threat that had actually been locked inside it, dealing with the bandits and mercenaries who had been threatening the peaceful (and admittedly insane) population of Pandora they met along the way.

Borderlands was trashy entertainment; fun as a single player game, but even more fun with a group. The characters were all fascinating and darkly hilarious in their own ways, and the back-end DLC that was released fleshed the world out more than it probably had any right to. It was a surprise hit, so a sequel was inevitable. Three years later, and Borderlands 2 is here.

Set five years after the Vault Hunters opened the Vault and got nothing but a face full of extra-dimensional tentacles for their trouble, Marcus Kincaid (now worshiped as a God by some bandits, incidentally) takes up the narrative again, telling how things have changed on the dusty borderland planet of Pandora. While there was no treasure per se within the Vault, opening it did release a bloom of the valuable element Iridium across the planet. Enticed by these new riches, the Hyperion Corporation sent a presence to Pandora, under the stewardship of its charismatic CEO, Handsome Jack. Jack invited potential Vault Hunters from across the galaxy to investigate clues that Hyperion have literally unearthed of a new Vault that actually does contain fabulous riches this time around. 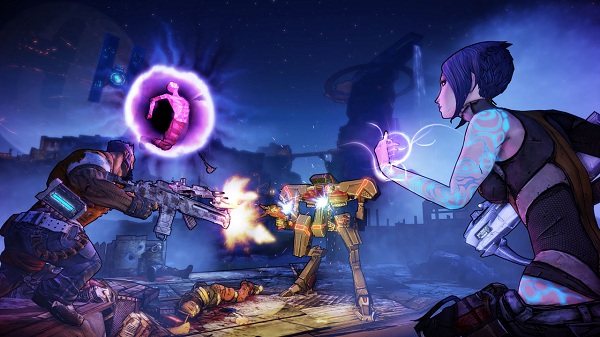 The old engineering maxim of “if it ain’t broke, don’t fix it” hold true for Borderlands 2; from a narrative and gameplay perspective not a lot has changed since the original. If you played the first game or any FPS with light RPG aspects you’ll get the hang of this pretty quickly and be slaughtering your way through Pandora’s terrifyingly dangerous and aggressive flora and fauna in no time.

Is there anything that isn’t dangerous on Pandora? Some of the Claptraps perhaps, but I digress…

While I truly doubt there’s as many new guns as advertised, the range on offer is pretty damn mind-boggling. I kept away from the more esoteric fair and still managed to kill most things with a trusty revolver. Borderlands 2 proves the old maxim that if you put enough rounds into anything, eventually it’ll go down. Even if it is a giant laser-belching skag…

The new player classes are familiar archetypes, but there are some tweaks to make them different enough to the original game’s classes. Character wise though they are new and entertaining characters, and Gearbox has wisely put in ways to learn about the other new Vault Hunters even in a single player game to make you want to play through each of the classes. A fifth class is available at time of writing, which I hope to check out at a later date. The only noticeable difference in the RPG elements is the Badass Ranking system; completing challenges grants perks for various player stats. The challenges keep within the spirit of the game, being either violent, ridiculous, or both.

Missions are once again delivered through NPCs, the bounty board system and the occasional found log entry and are standard fare, but the flavour text is always amusing. While the story is again just an excuse to cause extreme amounts of violence, it is a stronger narrative this time around. Things have gotten even worse on Pandora thanks to Handsome Jack, and that is shown by the weary and bedraggled state of many of the NPCs as they’ve been fighting a losing war for some time before the player got there. We also get some further insight into how Pandora got so bad in the first place, driving most of the original population insane, and it’s heartbreaking. Some of the original cast are back, including all of the original Vault Hunters in mentor roles, but the new characters are all winners, and could probably carry the game on their own without the returning characters.

Of particular importance is the antagonist, Handsome Jack. One of the narrative downsides of the original game was that there was no real antagonist for the players, aside from Pandora itself and those goddamned skags! The Crimson Lance and Commandant Steele were eventually a major threat to be overcome, but it felt like an eleventh hour inclusion, though the DLC improved on that. Here, Jack is orchestrating events visibly from the very beginning, leaving you to freeze your ass off on a glacier as you try to make your way back to civilisation while he buys horses made of diamonds cos he’s just so damn rich. His motivation is interesting and not something often seen done well; he wants to be the hero of this story, with the ends justifying the means. His plan also throws new light on the events of the first Borderlands, with some old characters getting some new motivations. 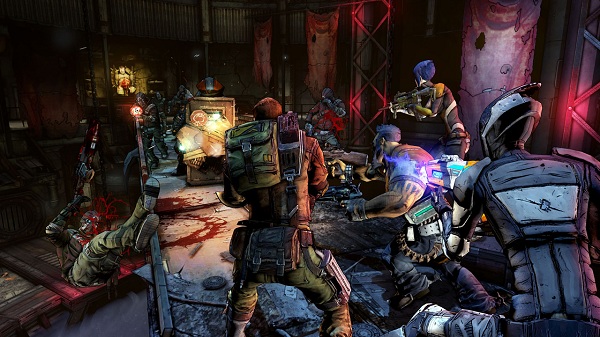 As fun as the story can be, it’s better playing with friends. Getting a group of Vault Hunters together is much easier this time around with most of the multiplayer issues ironed out from the first game. It’s also easier this time around for higher level characters to get into a game with lower level ones and help them out on missions without any storyline disparity causing the higher level character’s game to glitch. Though the most fun you can have is to get a group of four players together and run through the game from beginning to end.

On the negative side of things, there are few minor glitches here and there with missions not registering as completed, clear shots missing, and some AI stupidity. The story, as enjoyable as it is, can get hackneyed and clichéd, and I felt the middle dragged, grinding the plot to an almost halt while the usual side-quest explosion only padded things out.

That being said, the ending is interesting. If this gets a sequel, I wouldn’t be surprised in Gearbox doesn’t try for something more in line with an MMO than what has come before.

In conclusion, Borderlands 2 is a hell of a lot of fun, and gets an 8 out of 10 from me. This is trashy, gaming junk food. Consume appropriately.