Review – Dead or Alive 5: Last Round

Dead or Alive has always split the fighting community in two. On the one hand, it’s an exciting blend of action, counters and explosive level designs. On the other….well, let’s just say Dead or Alive Xtreme Beach Volleyball and just leave it at that.

Yes, the skimpy girls are the main reason this series gets tongues wagging, and as a fan of the franchise I’ve always felt that this constant need to overexpose the females on the roster to sexy costumes and innuendo overshadows its rather solid gameplay. But Dead or Alive did, for a while at least, get things back on track with a well orchestrated collection of characters new and old, with a story just as cheesy but enjoyable as it always has been and plenty of game modes to keep you going for some time.

And now comes Last Round, the next-gen upgrade that ups the visuals a tad and includes a few more characters to complete the roster. For the most part it’s exactly the same as DOA5 was, but there are a few differences compared to the last gen counterpart that both excite and, unfortunately, frustrate.

The main campaign and its many local and online game modes are here and are still working wonderfully, since there wasn’t really a need to change anything up there anyway. However, I did notice a few glaring bugs that caused the game to crash or stop loading a few times when moving from one game mode to another, and trying to find an online match left me frustrated more times than not (although I’m going to put that down to a lack of people playing the same time I am, as when I did find an opponent everything went smoothly from there.)

DOA5: Last Round includes the largest roster of any DOA game to date, though that isn’t something to shout home about. Some of the newest combatants are welcome additions, like the now playable Alpha-152 and the returning Raidou, whilst others are just clones of other characters. Phase 4 is rather obviously thrown in for fan service, for example, and while Leon is nice to have around, he’s pretty much the same as Bayman. 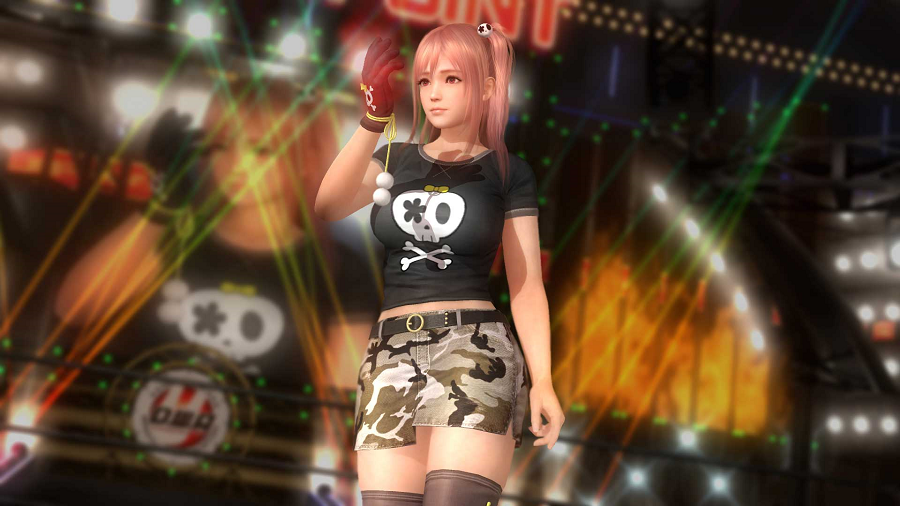 The most contentious addition to the roster, however, is high school student Honoka. This eighteen year old supposedly copies moves from other characters simply by looking at them, which is just another way of saying ‘hey, how can we add another character into our roster without having to come up with a new set of moves and market her to the crowd who love Japanese school girls?’ She simply doesn’t fit in to me, especially when compared to mainstays Kasumi, Ayane and Helena.

When you put this next gen version up against its previous incarnation, visually there isn’t a massive leap up. It still looks pretty, with sweat forming and falling down faces, explosions left right and centre, and a frame rate that never seems to dip during the more hectic moments. Loading times seem to have also taken a dip compared to the original edition, which is a welcome change for sure.

But despite all that, it’ll always be the sex appeal that people will talk about. Again, I have to go back to Honoka here and say it’s rather obvious she was included for that purpose (thank God she’s 18 then, otherwise there would have been some major problems) and the amount of character costumes available as DLC marketed solely to show off the female curves is rather disappointing. I hoped we’d passed the point where that kind of exploitation made it easier to sell a game, and it’s disappointing as on its solid gameplay foundations, I can honestly say Dead or Alive is right up there with the best of them.

Dead or Alive 5: Last Round isn’t that much of an upgrade from its last gen versions, but as a complete package and for those who haven’t played a DOA game recently, it’s definitely worth your time. There’s plenty of game modes both offline and online to keep you occupied and learning the complex countering system always makes it worthwhile. I just wish Tecmo would stop it already with its need to have boobs all over the place. Seriously, we don’t need another Beach Volleyball fiasco, yeah?