You may have seen the show by now. You may have played the game. But what is Defiance? Put simply, it’s an ok show that might take some time to warm to, but it’s also a very confused game. Let me explain that statement before you agree or disagree, but for the record, I have enjoyed playing Defiance.

Defiance is an MMO/FPS, but at its heart it’s an over the shoulder shooter. At times it may utilise first person, but for the most part it’s a shooter. Lots of pew pew pew, boom! and general sounds of dying – you get the picture. Defiance features a level system, which actually isn’t really a level system so much as it is a skill unlock system. It’s called EGO – The Environmental Guardian Online – a little lady that only you can see who helps you out and generally stops you from dying. She also gives you skills like cloak, overcharge, decoy and blur. Gaining EGO unlocks new skills to purchase which help you better navigate through the game world, such as increased cloak, more damage while standing still, or better crits while crouching. Sounds good so far right?

As an FPS shooter game it’s slightly above average:  it’s fun, fast paced and the guns are great. As an MMO, however, Defiance is below average. Now that I’ve broken the game down into the two parts, lets explore the good parts of each. 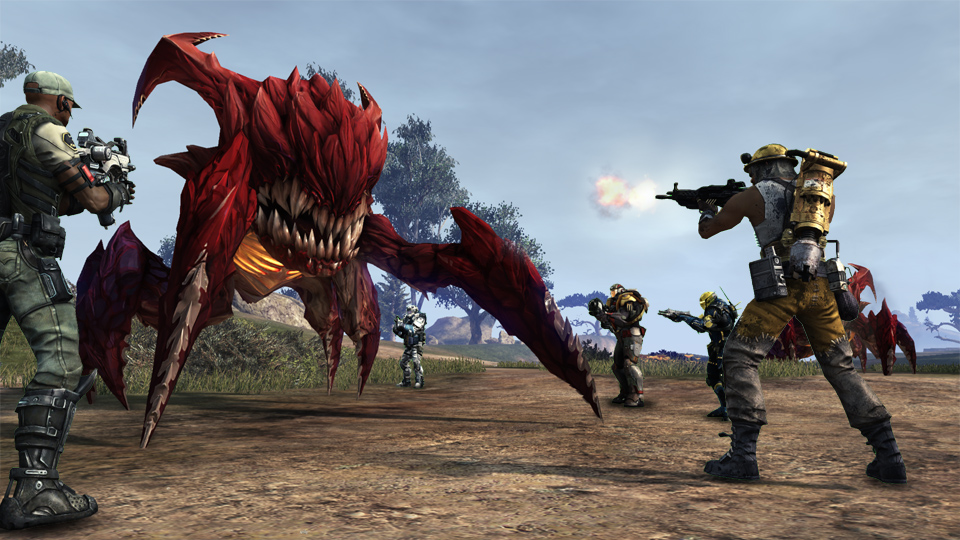 First – it’s a fun shooter! You duck and roll, try to find cover and it works most of the time. The main story mission is solid enough, the voice acting is on par with the show (and by that I mean not great, given the show wasn’t the most well produced) and story missions are quite fun. But after 20+ hours I started to think to myself “this is starting to look very much like the same thing I did when I first started”. And I was right. The enemies, the guns, the boss fights – all the same. I even used the same gun on and off that I had at the beginning of the game for ages – until I levelled the gun up. Yes – you level up weapons – the weapons then fill up with their max experience and you are rewarded with perks for that weapon type. It’s a novel concept but I found myself wishing I could have paid to unlock the experience on a gun back to zero. The result of levelling up guns was that I was left with two awesome guns I didn’t really want to use because I got no progress out of them.

The biggest drawback with the levelling system, however, is that by and large, the assault rifle I have at EGO 1 and the Assault Rifle I have at EGO 500+ are exactly the same in stats. Yes, I may receive a few more bonuses for using the higher EGO gun, the gun may have a few additional mods, but the base stats are the same. The same thing can be said for my character: health is the same, shields I may change based on their loadout and the situation I find myself in (less shields, lower recharge rate, or higher shields, slow recharge), but I haven’t seen anything hugely different when using different loadouts.

As for the MMO part….the best that can be said about it is that it’s there. I think. The chat system in this game is barely functional and makes absolutely no sense from a design perspective. It’s hidden off to the right, the colour of the text is hard to read by default and there is no global chat. Yes – you read that correctly – there is no global chat! This kills the game for me, as it means the game is basically simply local chat, which means silence. The kind of silence you might find in a library. Full of corpses. As much as I loathe to admit it, having no global chat made me wish for the general chat you find in other MMO’s. The smack talk, the stupid people, the general tips that appear – all gone from Defiance. I assume this is something they might work on,  and I suspect this is as a result of some limitation in the architecture of the Xbox or PS3. But I’m playing this on PC and I’m used to noisy noisy chat!

Moving on to Co-op. It’s also there and it’s pretty good. You can jump in from a quick menu and it is enjoyable. You can heal using a VOT spanner gun but it’s really about more people shooting more targets. Unfortunately, it doesn’t really feel like an MMO, and instead feels more like a game you fire up with friends and knock over a few missions. Again, this doesn’t mean the game is bad – it’s just not an MMO in the traditional sense. There is PVP but I’m yet to try it out, which is odd since Planet side 2 consumed many many hours of my life. Given the servers are in the US, however, and I’m in Australia, the lag would probably bug me. I might try it out later but in the end, if I want PVP I can play other games focused on that entirely. 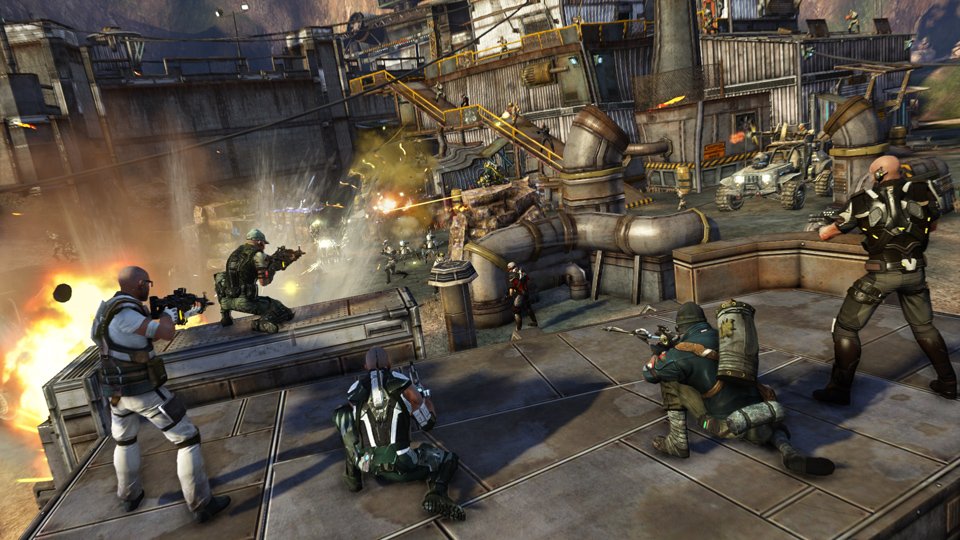 How about the game’s graphics? Sadly they aren’t up to what I would consider to be the modern standard. But once again, given Defiance is running on three different platforms, the graphics are pretty good. As a PC player, I would have liked a few more options to bump up the textures and make the draw distance larger, but they are serviceable. The environments are suitably post-apocalyptic – which is code for brown, grey, brown and some green, with guys dressed in old garbage cans. I guess bright yellow and fluoro pink would probably look odd in a world destroyed by huge ships falling out of the sky.

So – where does Defiance score? If you like shooters, it’s fun. It’s not great fun and it’s not the kind of fun that keeps you up until 2am making you late for work, but it’s still fun in small spurts. If you like MMO’s for the social aspect, then Defiance fails miserably. On the whole – the word I keep saying when playing this – it’s ok. It’s an Ok game.