It has been a while since I’d anticipated a game as much as I did with FUSE. The last was Bioshock Infinite, which I’m sure many agree was worth the wait. Having the chance to play a preview of FUSE though, this anticipation was different. I had an idea of what to expect and knew what Insomniac Games hoped the game would be, so I was curious to see how it lived up to these lofty expectations.

In FUSE you are a member of Overstrike 9, a merc-for-hire team made up of four renegades: Dalton Brookes (former RAVEN operative and the leader of the team), Izzy Sinclair (information and espionage specialist, hacker and DJ), Jacob Kimble (former LAPD detective who turned into a vigilante cop) and Naya Deveraux (an assassin who learned the trade from her father). Overstrike 9 has been hired to contain an ‘incident’ that occurred at Hyperion Base, a secret government location. They arrive and realise that terrorist organisation RAVEN are there as well and on the hunt for FUSE, an alien substance with adaptive abilities.

There are some great things about FUSE. The leap function that allows you to jump between different members of the team at nearly any point in the game is a good way of mixing it up. If you grow tired of one weapon, or a different character is in a more strategic position, than a simple two button combo is all that is needed to swap. The visuals are impressive too. The graphics are sharp and clear throughout and there were a couple of points where I stopped to look out at the landscape, which was quite breathtaking. I felt the soundscape worked for the game because, on reflection, it didn’t stand out. This may sound like a negative point but for the style of game FUSE is, a distinct soundtrack can be overpowering and distracting. Instead, the soundtrack added to the atmosphere and accentuated the game.

For the most part, the AI control of your teammates is pretty good. There were times when they hung back a little too much for my liking, and the occasional character got stuck behind a wall while running into battle. But when it comes to healing they are quite responsive in running over to revive you.  There is a really great mix of enemies from various human soldiers, mecha and aircraft. Each level provides numerous cover points and the game does require you to make some tactical judgements when attacking bosses. However, the various mechs that pop up as mini-bosses did become annoying because the only way to defeat them is to continually fire into their back fuel tanks so there is an awful lot of running around.

FUSE draws on RPG elements by way of a skill tree function. The skill trees are character specific in subtle ways, yet weren’t as uniquely designed for each character as I thought they might have been. Additionally, the menu layout became frustrating as there was no way to switch between characters in the skill tree menu.  The game requires you to leap between characters, and then go into the skill tree menu to allocate accumulated skill points. Trees aside, my one overall wish was for more control over how each character could react in a fight.To strategically place the characters in certain locations before commencing a fight would have been a nice touch to fully utilise the leap ability.

The FUSE infused weapons were also interesting in their execution, but I would have also liked to have seen a more organic, alien evolution over the course of the game. Maybe that’s something they’re saving for a potential sequel.

That said, I played through the whole Campaign and did enjoy myself. Some of the boss battles were frustrating in their difficulty and I didn’t die that often (the med beacons are absolute savers!). I played a few games on Echelon mode, but personally wasn’t drawn to it in single player. In Echelon you can choose from six area maps, which are all locations you fight through in the main campaign, and each map consists of twelve rounds of increasingly brutal enemy attacks. Because FUSE focuses on co-operative play you can’t kill your teammates but you can race them to collect rewards after finishing various stages of an Echelon game. I like a good story with my gameplay so if you’re like me than try a game of an Echelon in multiplayer mode with friends.  But if you are also like me in that none of your friends have the game then there is the option to drop into anyone’s open campaign or Echelon game. 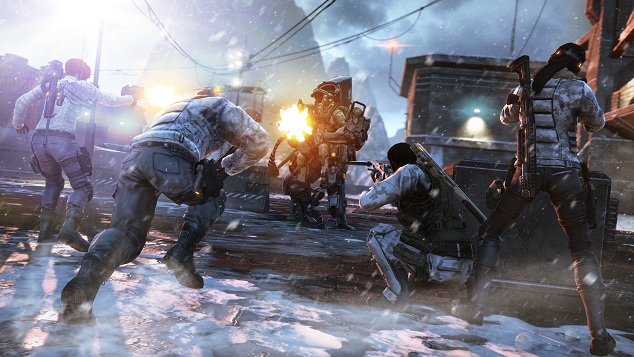 So, did the game live up to my expectations? Kind of. I’m not a big shooter fan (although that could be because I haven’t played many of them). I love my RPGs and most of my disappointment can be attributed to wanting more of that style of gameplay. These characters were given rich back stories and I wanted to see more of those throughout the game. Naya and Dalton, through their relationships with RAVEN members, have more of their history explained than Izzy and Jacob do. There’s also a small hint of humour in the dialogue between the characters outside of the cut scenes, but this is often only a couple of lines here and there, and it is sometimes drowned out by gunfire. If you’ve been following the development of this game for a few years then you’re likely familiar with the original Overstrike 9 trailer released at E3 in 2011. I’m sad to say that this level of humour did not make it into FUSE. But in spite of these small quibbles I did enjoy the game for what it is, not quite a genre revolutionising game, but one of substance and polish.