Review – Injustice Gods Among Us

There has been enough debate regarding the construction of narrative in video games. I understand the merit, but can’t help but think that it sometimes turns out to be a cyclic argument as to who creates meaning in video games. While some see the player engagement as a support system for the story, others believe that the gameplay itself is how a player makes meaning and the story naturally matures through the individual context of the player.

It is interesting to note that fighting games have also been affected by this shift in game dynamics. Remember when fighting games would unceremoniously pin a lineup of diverse characters to the selection screen and a competitive dynamic would occur as if by divine inspiration? Zangief might have had an interesting back story, but see how if I mash this button really quickly you don’t have an opportunity to get up and therefore I win? The shift could be providing options for single players, but also foreshadow that game developers and gamers are taking more moral accountability for the violence that they engage with.

Prior iterations of this concept can be seen in Mortal Kombat vs DC Universe, but I felt as if that single-player campaign read like a ridiculous crossover fanfiction. Injustice: Gods Among Us has leapt over that construction in a single bound, with NetherRealm inviting us to take control of a selection of these superheroes as they deal with a variety of different conflicts. While the player picks up Green Arrow’s bow or Wonder Woman’s sword and shield, NetherRealm is framing the interaction around the inner conflict that many of these heroes face every day – the ethical reason for violence, the consequences of acting beyond the cultural boundaries of justice, and the responsible use of their abilities to preserve both freedom and safety.

Anyone can wear a cape, but not everyone can be the goddamn Batman. 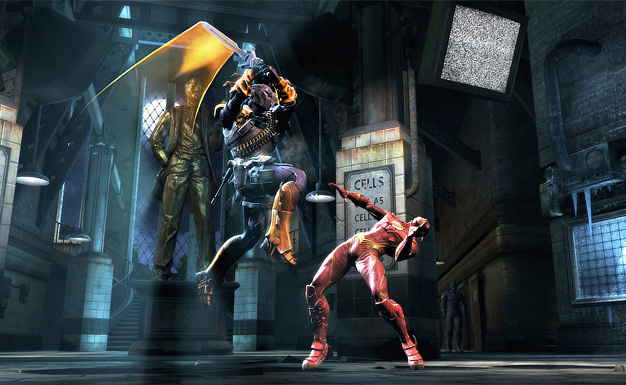 Of course, there is a relative suspension of disbelief when a “caped crusader” such as Green Arrow or Nightwing is going up against the near-immortal Superman (or the literal immortal Ares). However, with a strong narrative and equally accessible game mechanics, NetherRealm supports the player to believe that such a situation could happen. Beyond a character’s own individual skills, the arenas are interactive and provide a variety of items for characters to weaponise in their pursuit of victory. For button mashers, the execution of these and other over-the-top moves is relatively easy, allowing players to draw on the powers of their favourite iconic hero or villain at any skill level. Combos use similar buttons for all characters with very different results – NetherRealm wanted spectacle rather than shock, and what better way to keep the game alive than to appeal to the player’s sense of curiosity?

Injustice certainly caters to the solitary gamer – when the Story Mode is completed, there are plenty of other activities to enjoy that will also build up your experience points. Battles provide an arcade-style ladder match, and challenges are plentiful in the S.T.A.R. Lab Missions. Each of these can be modified and customised for various experiences, and each of these contribute to the Player Card – a customisable display that allows prospective opponents to view your stats and experience level before battling you online.

When transitioning from single player to multiplayer, reports indicate that online play is a little bit buggy, which is not the best news as multiple players would be where this game could really shine. I decided to take a “20th century” approach to multiplayer, and I can confirm that two players sitting in their lounge room are going to get bored after approximately 30 minutes (in the end I let player 2 play the Battle Mode on his own and just cheered him on – this is cooperative play, right?). If some of the online options were available for groups of friends who want to tournament on one console, it would be a wonderful advantage.

Injustice: Gods Among Us has enough to engage the solitary player in the world of these DC Universe heroes. NetherRealm offers more than enough for the comic fans, with minor characters and a plethora of references to keep them engaged. There is certainly enough content beyond the story campaign to challenge completionists. However, players will need to be innovative outside of the game environment if they want to find a way to play Injustice with friends.

The attention to detail scores Injustice an 8 out of 10.

Injustice Gods Among Us