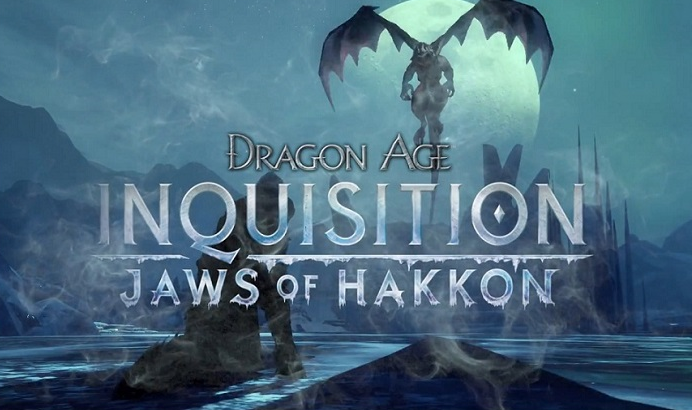 If you’ve ever played a Bioware game, you know that by the time the first cutscene is over, you’re going to have a dozen new codex entries to read right off the bat. We all saw how crucial lore was in Inquisition – it was like they sharpened it and very sneakily stabbed us in the back with it. Inquisition’s first story-based DLC, Jaws of Hakkon, is now out and available for all platforms, and while it doesn’t address our elven-pantheon related questions, it does give us an extra adventure with new allies and enemies in a beautiful new area – and, of course, a ton of new lore.

Jaws of Hakkon brings the Frostback Basin to the attention of the Inquisition. As is the case with a lot of ancient history, the last days of the previous Inquisitor are a mess of confusion, mystery, and rumor. Professor Kenric from the University of Orlais has determined that the area is a good place to start digging up the truth, but of course it’s never as easy as finding an old library filled with alphabetized volumes of “The History of What You Want to Know, Part 1 of 12.” Research is immediately hindered by a group of Avvar calling themselves the Jaws of Hakkon, so naturally it’s up to the Inquisitor to stroll in and start kicking ass in the name of academia.

At times, exploring the vast open spaces of Inquisition can feel rather daunting, so the fact that Hakkon opens up an entirely new area seemed …questionable at first. Fortunately, the Frostback Basin proves to be a welcome addition to the main game in hardly any time at all. The map isn’t another Hoth or Tatooine; there are forests, swamps, cliffs, coasts, waterfalls, and ancient structures all sewn together beautifully and believably. The level design is creative and you’ll find yourself not just jogging along the forest floor, but also diving into caves and trekking up steep mountainsides. It’s fun and challenging to explore, so much so that it would be worth running around in even without all the quests and loot to find. The Basin is gorgeous, and as you progress your forces will gradually move out from the main base camp and patrol the area, holding smaller campsites and actually fighting the wildlife instead of expecting you to handle it. I flinched early on at one point when I thought I had been cornered by both an angry Avvar and a requisitions officer, but I was relieved to discover that the officer was an Inquisition mage who began throwing fire at my enemies. At the end when everything was properly smoldering, not a single person asked me to hunt down minerals for them. It was glorious. Setting up camps was also exciting this time around; not only are the camps more substantial, but half of them end up as fancy tree houses – fancy tree houses complete with codex entries, armor and weapon crafting tables, and the standard tents and potion stations. They’re like actual functioning camps and not just the usual restock and refuel points. The area just feels alive with the Inquisition establishing an actual presence in it.

The Frostback Basin isn’t just pretty – it’s got a swell personality too. Between helping your own soldiers, making friends with the local Avvar, and setting every Hakkonite you see on fire (note: your foray into the Winter skill tree will prove to be a poor choice), the area is packed with engaging quests and interesting characters. Sure, there are the usual dozen shards to collect and constellations to draw, but overall the sidequesting you’ll do in Hakkon feels more involved. You’ll run into most questgivers and NPCs multiple times, giving you the chance to work with characters over the course of the DLC and really earn what alliances and influence you accrue. Fans of the deadly and adorable Scout Harding can also look forward to seeing her at the main camp, where she’ll actually stay this time as the Inquisitor and Co. explore, allowing players to chat and occasionally get quests and gifts. Nothing about the area – the characters, the scenery, the objectives – felt wasted.

On top of all this, Hakkon’s storyline is fun. You’re uncovering the past in a very Indiana Jones-style of exploration, so be prepared to adventure all over the place while solving puzzles and beating the snot out of bad guys. Without spoiling anything, the story felt well-paced, and the giant plot twists and hectic battles you encounter were all rewarding, which was especially noteworthy since I was running with a completely over-leveled mage Inquisitor. I had gotten so used to curbstomping my enemies that it was fantastic to get my ass handed to me on several occasions again!

And of course, Hakkon comes with an absurd amount of new lore to unlock, not only regarding the history of the Inquisition, but there’s a ton of info waiting to be uncovered about the Avvar as well. It’s not all found just by unlocking codex entries either (though, it’s worth mentioning the ones you find are great too); you can watch and take part in the Avvar traditions, and discovering ancient history involves more than reading some battered, impossibly preserved journals. It’s fairly independent of previous games’ lore, so newer players won’t feel left out if they haven’t been keeping up with the massive lore of Thedas. Hakkon opens up an entirely new section of ingame history, and best of all your inner circle will have quite a lot to say in about it throughout a number of the quests and environments. Banter seemed to trigger more frequently for me in the Frostback Basin, so having my trusty, chatty adventuring team hunting down the history of another trusty, chatty adventuring team was very satisfying. 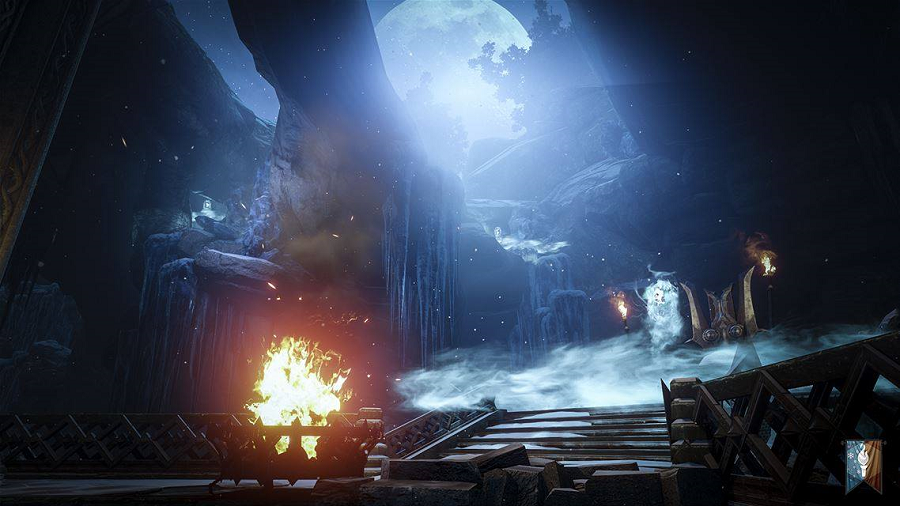 There were only a couple things I found disappointing about Jaws of Hakkon, and really, they’re very minor complaints. While your companions do say a lot during quests and have a variety of environmental comments, the DLC does not introduce any new banter or one-on-one interactions with the Inquisitor. We weren’t promised this, so it’s unfair to say it detracts from the experience, but it’s just the tiniest bit of a letdown. There are some very cool revelations at the end of the questline, but the only consequences you’ll see are mostly in the form of War Table missions. It would have been nice to have just a short debriefing with the advisors to make Hakkon feel less isolated in the greater story.

With regards to that, as great as the story experience is, on a larger scale it does feel a tiny bit out of place. Considering the threat looming over the Inquisition, it seems odd that everyone decides to take a moment out of saving the world to go study history and deal with some wayward barbarians. There’s always the option to play the DLC after the main storyline, but understandably some players won’t want to be missing companions and dialogue that might not be available after the ending. The landscape and story are more than worth this tiny weirdness, though, and it’s not like this is the first DLC in gaming history to feel a bit disconnected. Besides, at this point I think I spend more time tinting my armor (go plaideweave!) than closing fade rifts anyway. It’s for the War Effort, I swear.

Ultimately, while Jaws of Hakkon has little to do with any of the dire questions we were left with at the end of Inquisition, it is a totally worthwhile addition to the game. The Basin is lovely, the plot is exciting, and at the end of the day it’s another great excuse to drag your companions around for mandatory outside bonding time.