Metal Gear Rising Revengeance sees you stepping into the high-heeled boots of cyborg ninja Raiden as he slices and dices his way through enemies with a focus on action over stealth. Revengeance is the ninth main game in the Metal Gear series, but does it reach the critically acclaimed lofty heights of its predecessors? Simply put – no, it does not.

I’ll be upfront from the start – I am not well-versed in the Metal Gear Solid lore. I completed the original game on the PS1 and experienced some of the fourth game on PS3, but that is where my exposure ends. As a result, I would classify my knowledge of the Metal Gear verse as definite starting area level. Given this lack of knowledge on the history of the verse, I have no clue how the storyline in Metal Gear Rising: Revengeance ties into the larger verse, and I cannot therefore comment on the intricacies of how this story connects to others in the series. To be completely honest, however, even had I finished all previous games, I’m not sure I would have understood the storyline anyway. Award-winning this is not.

To distill the plot down to its base beginnings – Raiden is on a mission to bring down PMC Desperado Enterprises as cyborg warriors belonging to this PMC assassinated a target under the protection of Raiden at the beginning of the game. There are twists and surprises within the plotline, however the game is filled with so many horrid one-liners that any points the game earns in plot development it quickly loses in cheesy C+ dialogue delivery. Perhaps this is part of the charm of the series, but I found it more of a put-off than a playtime encourager. When I’m not sure whether a game is making fun of itself or it’s genuinely supposed to be the way it is in all seriousness, something has gone wrong.

Storyline and dialogue aside, the score to the game is handled extremely well. The music crescendoes at all the right times and never feels out of place or over-used. The score manages to complement the action unfolding on screen, and spurs your heart to beat just a little bit faster during boss fights. During exploration areas, the score does enough to be noticeable but never takes over in any scenes. In a game whose story and dialogue sometimes feel like a C+, the score consistently hits an A. 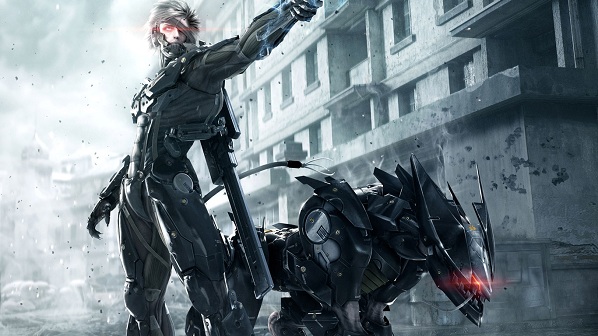 The graphics are similarly impressive, with every detail looking sharp and crisp. Environments look exceptional and colours look vibrant. Revengeance is definitely a lovely game to look at. There’s a nice balance of environments used and you do not feel as though you are revisiting similar areas over and over. The environments look vibrant and alive thanks to the graphics. It is unfortunate, then, that they do not feel alive thanks to the uninspired gameplay.

The gameplay in Revengeance focuses on defeating enemies using Raiden’s sword in addition to subweapons that Raiden unlocks throughout the game. Both types of weapons can be used to perform combo’s and counterattacks, and extra attacks for each weapon can be unlocked in a special upgrade screen inbetween main missions by spending what amounts to the game’s XP. Introduced to Revengeance is Blade Mode – a special mechanic which allows palyers to dismember enemies in slow motion and steal useful parts stored in their bodies. Raiden can perform both light and heavy attacks in order to build up his blade meter and when Blade Mode is activated, Raiden deals a flurry of deathly blade strokes on his opponent. Blade Mode is a beautiful looking feature, and you’ll feel like a complete badass everytime you use it. It’s a welcome addition to the game, and the standout in what is, on the whole, uninspiring gameplay.

Whilst Blade Mode feels smooth and intuitive and leaves you feeling like you want to hifive anyone in the room, the base gameplay experience is sadly disappointing. Whilst you are able to alternate your attacks from light to heavy and use a variety of weapons, the fights can be so frenzied that gameplay degenerates into button-mashing. There were times during my playtime with Revengeance that finishing a particularly difficult area left me with fingers so sore I had to stop playing. I’m sure some would see this frenzied gameplay as a positive, however I found it detracted from my experience with the game. In addition, the inability of the camera to keep up with the moves I was performing was irritating at first and frustratingly unworkable as the game progressed. Also frustrating were boss battles that ranged from incredibly easy to impossible for me to complete. 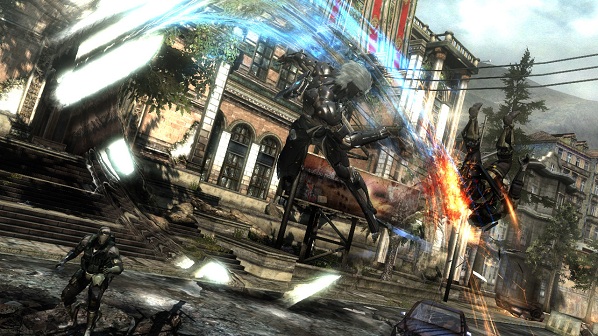 I’ve been very careful not to use the word ‘playthrough’ in this review due to the fact I was unable to complete Metal Gear Rising: Revengeance because of an exceptionally challenging boss fight. I attempted this particular battle eight times using a variety of different strategies. Despite this, I was unable to progress past this point. There may be some reading this who will say I should have tried more times to complete the boss battle, or kept attempting it until I ‘lucked out’ and beat it. To that argument I will say this: I play video games because doing so is fun. Because video games provide me with an enjoyable distraction from the seriousness of real life. As soon as a video game starts feeling like work to me, as soon as it starts feeling like a frustrating and unrewarding challenge, it’s no longer fun and has stopped being enjoyable. When I reached this particular boss battle and failed to complete it despite eight tries, Metal Gear Rising Revengeance became work to me. It was no longer enjoyable, and despite it having some impressive elements, it was no longer an experience I wished to continue.

Whilst Metal Gear Rising Revengeance boasts an impressive score and an excellent new game mechanic in Blade Mode, the game falls well short in terms of gameplay and overall enjoyment. If you’re a fan of the series, perhaps you will see a glittering diamond where I saw a zircone. Perhaps you’ll persist with what I found to be frustrating and unrewarding gameplay. Sadly for Raiden, my experience with stepping into his heels was not one I enjoyed. Give the game a try if you’re a huge fan of these kinds of games, or have some spare time and cash in between releases. Otherwise, save up your cash for something else.