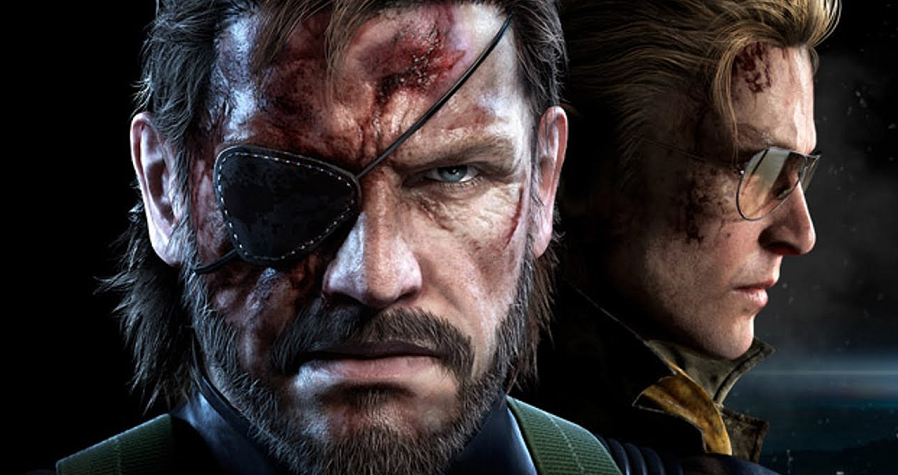 Every so often a game comes along that I enjoy so much I struggle to find words to describe it, due to me not believing I can do the game justice. Metal Gear Solid V: Ground Zeroes is one of those games. It combines a variety of intertwined systems with great replay value to create a game that’s enjoyable to not only play through to completion, but to toy around with and experiment. It’s not only a fantastic game, but it’s also a brilliant PC port that shows other developers how it’s done – it runs well with reasonable system requirements, with no apparent quirks not present in the console versions.

Ground Zeroes is the first part of Metal Gear Solid V, which will be completed by The Phantom Pain next year. While other games in the Metal Gear series place a large focus on narrative, Ground Zeroes focuses instead on its gameplay systems, and acts like a sort of toybox to prepare you for The Phantom Pain. It consists of one main mission, and 6 shorter side missions, all of which take place on the same map. It’s a smaller package than you might expect, and as such has a lower price point. The $20 asking price for the PC version is more than fair, as while the game doesn’t take long to ‘complete’, it encourages subsequent playthroughs by scoring each attempt at its missions, and giving you many ways to complete each one. Each mission also has a Hard difficulty, which asks that you complete the same objectives with less health and weapons, and this makes for an interesting challenge.

The main mission of the game tasks you with breaking into Camp Omega, a mysterious prison facility, in order to rescue two important targets. There isn’t too much story, and what story there is can be easily followed by someone unfamiliar with the series, so newcomers shouldn’t be turned off. Be warned however – the game does deal with some mature content, featuring things like torture and gore, so be wary of that when purchasing. In order to rescue the two targets you’ll need to either be super sneaky, or really fast, with a good aim. The game plays well as both a stealth game and a shooter, meaning that regardless of how you choose to play you’ll enjoy yourself. 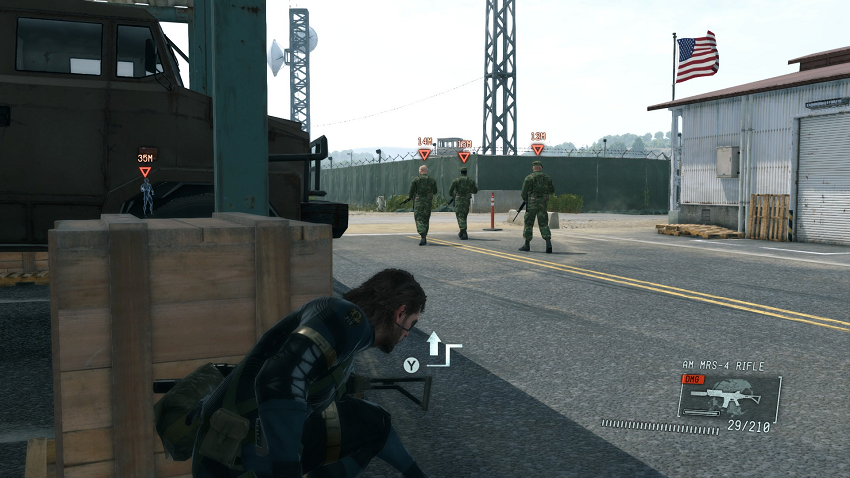 Playing stealthily is when the game’s systems really shine, allowing for exciting emergent scenarios. One good point is that you don’t ‘fail’ stealth as soon as enemies become suspicious, which means that there’s a variety of ways to keep them off your scent. There’s simple ones, like throwing empty weapon magazines to lure enemies away from your position, but you can also get a bit more creative. For example, you might use C4 to destroy one of the lookout towers around the base. Being such a big event, the base’s control will send most squads of enemies to investigate. It will put them on alert, and more susceptible to noticing you if you get close, but it also provides a big distraction, allowing you to sneak over to the other side of the base, or areas where the guards were previously patrolling.

The patrol system featured in the game is really neat, and makes the enemies feel like a natural, cohesive unit. Each guard will report back to the base if they notice something fishy going on. If they catch a brief glimpse of you, they’ll probably shrug it off or ignore you, but if you’re too exposed, they might report in that they see a suspicious individual wandering around, and are moving in to investigate. This can be useful if you wanted them to move out of the way, but it also means that you can’t kill or incapacitate that enemy until they’ve given the all clear, because if the main control doesn’t hear back from them they’ll know something’s wrong and send more enemies over to investigate. The radio chatter can also illustrate the effect you’ve been having on the game world – if you’ve already killed a large number of enemies, a guard might be told that they can’t call for backup when investigating something suspicious. The guards feel like real people, co-ordinating with each other in order to work effectively. Their conversations can also sometimes reveal new details of the plot, or secondary objectives you can try to complete.

It’s great fun experimenting to see what the game allows, as you’ll often find ways to make subsequent playthroughs easier, or just create all sorts of chaos amongst the order of Camp Omega. The game’s systems allow for a lot of exciting scenes to play out – one of my favourite moments was when I was attempting to sneak a prisoner out of one of the more fortified areas of the base. I’d called in an evac chopper to a secure location, away from enemy sight. But as I was escaping, I was spotted – enemies started firing on us from everywhere – one even hopped into a heavily armoured APC and started firing at me with its autocannons. I took a massive risk and threw a flare so that my chopper pilot would reposition themselves closer to me. The chopper lands, but takes heavy damage as I run over to it, carrying the prisoner, dodging bullets and explosions from all over, and hop in. We begin to take off, and as the pilot screams about how bad a condition the chopper is in, the enemy anti-air turrets begin firing. Things are looking grim, but we manage to escape just in the nick of time. It was such a rush, and was so satisfying to pull off. 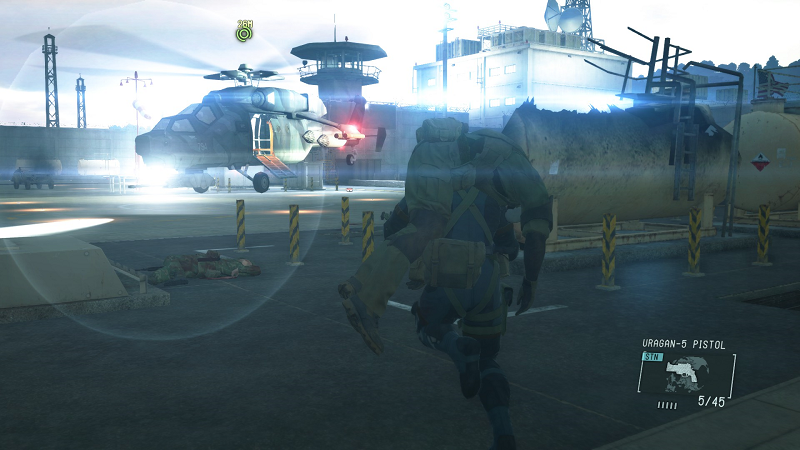 Unfortunately, I had a few minor issues with the controls. The game has a cover system, but no cover button – you simply walk up to an object or structure, and you’ll take cover behind it. Occassionally, however, Snake would position himself awkwardly, and I’d have to try to reposition him, only for him to walk out of cover, sometimes resulting in me getting spotted. And whilst you can fire weapons from behind cover, if you pull out the binoculars (which you use to scope out the area and mark enemies), Snake will remain in cover, and you’ll find yourself staring deeply into some concrete. Having a single, all-purpose interact button also causes a few issues. There were times where I went to use a searchlight so I could turn it off, only for Snake to instead jump from the tower into plain sight. These were minor issues that didn’t impact my enjoyment too much, but they were still a nuisance when they occurred.

At the completion of each mission, the game presents you with a score screen, where you’ll be awarded points based on how you played the game. You’ll be scored higher the quicker you complete the mission, and for completing secondary objectives like rescuing extra prisoners, and you’ll lose points for things like killing enemies (opposed to knocking them out), and raising the alarm. You’ll want to replay each mission to get a higher score due to the satisfaction it yields, but doing so will also unlock extra challenges to complete in each mission, and stronger weapons for you to start each mission off with. It’s a great feeling when you go from gunning down waves of guards due to your lack of stealth skills to being able to clear missions without being detected.

There’s a good variety of mission types among the side missions. These include missions that allow for different approaches, to more structured ones. One mission involves you providing cover fire for a VIP from a helicopter, before landing and escorting them out of the base, while another (incredibly bizarre) one has you recreating iconic scenes from the original Metal Gear Solid for photo opportunities, which was a really weird, but interesting task.

From a graphics perspective, Ground Zeroes is a gorgeous game. The Fox Engine is remarkable in action – your jaw will drop when the first cutscene transitions seamlessly into the gameplay, and you realise it’s all in-engine. The game’s missions take place over different times of day, so you get to see the engine’s full capabilities in terms of lighting. The way the searchlights glisten over a the rain-soaked landscape makes them feel that little bit more threatening, and being able to spot distant enemies because of the light reflecting off their wet clothes is neat. The screenshots as part of this review will give you a decent idea of how the game looks, but it’s even better in motion, especially at 60fps. 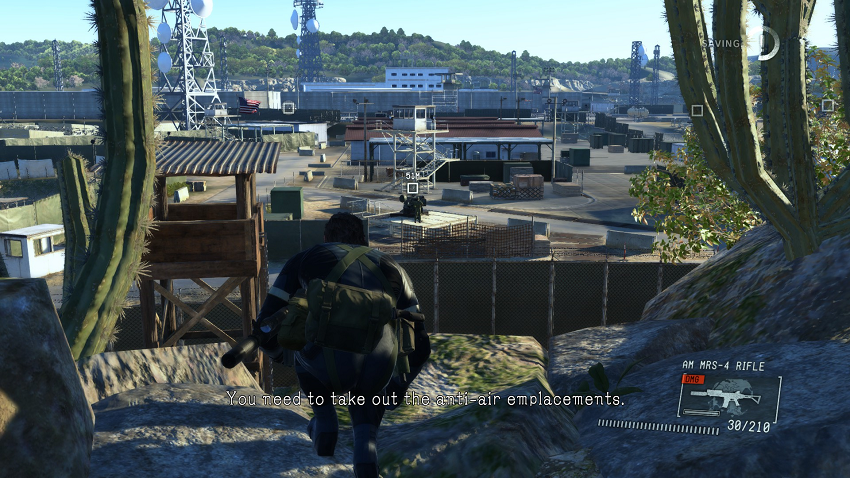 Metal Gear Solid V: Ground Zeroes will likely end up being one of my most highly regarded releases of the year. It avoids padding and useless filler, and instead provides a streamlined experience that can be replayed again and again, and at a discounted price no less. While the game could probably be rushed through in an hour or two, I’ve spent 11 hours playing it, and I’m still not done with everything yet. If you’re the kind of person who wants to just complete a game and move on, Ground Zeroes isn’t for you. But if you’re someone who loves experimenting and seeing how their actions affect a game world, I can’t recommend it enough. Its combination of stealth and action has me eagerly anticipating The Phantom Pain.