Review – Need for Speed: Most Wanted

There are games that hold a special place in your heart – ones that you look back on with fond memories because your experience when playing them was magical. The original Need for Speed: Most Wanted was this kind of game for me. I am pleased to say that the current re-imagining of Need for Speed: Most Wanted by Criterion and EA Games retains all the magic I remember, and adds more.

Upon hearing Criterion were taking the reins for Most Wanted, I had high expectations. After delivering Burnout Paradise, one of my favourite racing games and one that I still often play, I was expecting a lot. In Need for Speed: Most Wanted Criterion have delivered, and they have delivered in a most spectacular way.

The game opens to the hauntingly melodic tunes of Muse, and before I’ve even started a race I’m hooked. The clean, crisp, vibrant visuals draw you into the game world and from the moment you take control of your first car, you know you’re experiencing something very special. Everything in Fairhaven is beautifully realised. The city is spectacular – from its built up urban sprawl, to its gorgeous rolling hills and park areas. There will be times during your Fairhaven exploration where you will stop simply to take in the vista’s around you – they are that superb. The cars you drive are also beautifully rendered and each is a joy to drive. Each car featured in Need for Speed: Most Wanted has been expertly detailed and all cars are true to life depictions. If you’ve ever dreamed about taking a Lamborghini Gallardo out on the streets of a gleaming city, this is probably as close as you’re going to get to the real thing. 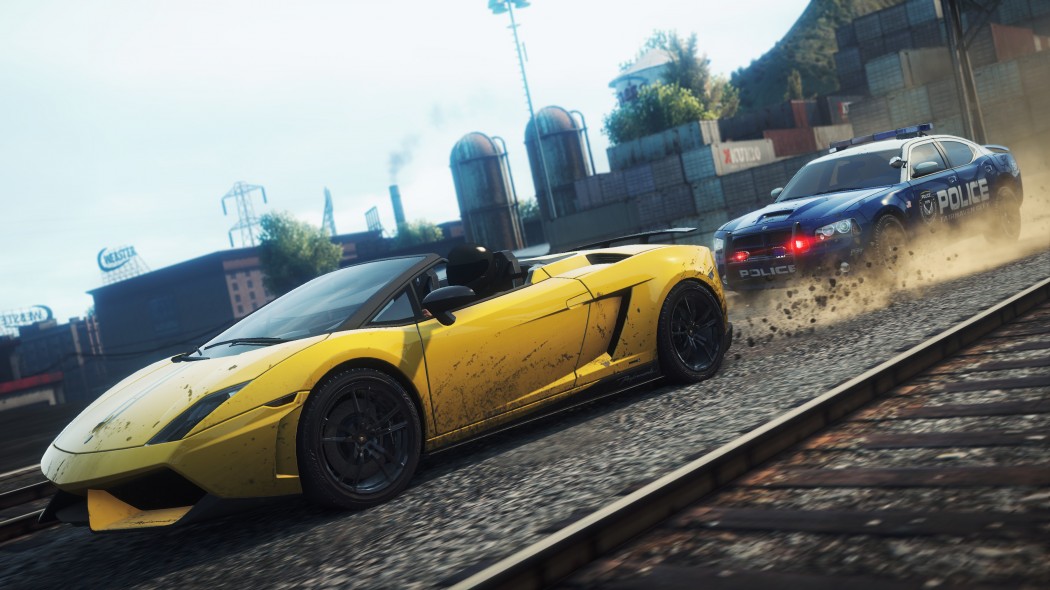 Driving each car is an experience in itself – the handling on all cars is sublime, and makes exploring the city one of the most enjoyable things to do. Each car handles differently, with slight nuances in cornering or accelleration you’ll feel. After sliding behind the wheel of a few different makes of cars, you’ll soon find a favourite, but this doesn’t make discovering the dozens of cars scattered about Fairhaven any less enjoyable. In fact, quite the opposite – many times during my playthrough I discovered new cars and my previous favourite vehicle was replaced with the car I had just discovered. Allowing all cars to be unlocked and drivable as soon as you discover them was a masterstroke by Criterion and one that adds that extra magic to the game. The choice and variety of cars you are able to discover throughout the game world makes exploring it all the more rewarding.

Not that you need any more reasons to want to explore the world. Aside from being eyeball meltingly gorgeous, Fairhaven also provides other incentives for those gamers wanting to explore every inch of the map – billboards and security gates are back, and smashing through them is every bit as enjoyable as it was in Burnout Paradise. But now, thanks to the online functionaity included in Need for Speed: Most Wanted, you’ll want to smash every single billboard you come across. Play the game online, and each time you smash through a billboard, that billboard will show your avatar to each of your friends when they are playing online. This is an excellent feature, and seeing Fairhaven adorned with your avatar, knowing all those with the game on your friends list will also see this is one of the best feelings of accomplishment and one-upmanship I have experienced in a video game this year. 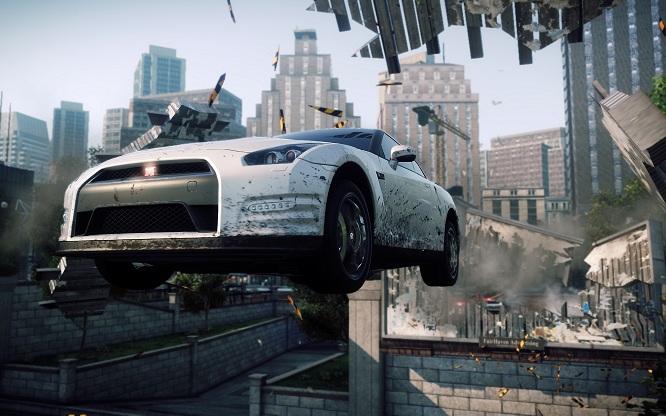 The online functionality doesn’t stop there – thanks to Autolog, you’re able to earn speedpoints and track your progress in challenges and tasks against other players. And there are a heck of a lot of challenges available in this game. Sit behind the wheel of a new car and Autolog will recommend challenges you can complete in order to earn speedpoints – which boost you along the Most Wanted list and unlock special events for you to gain access to rare cars. Each of the challenges are completely optional, but all of them are fun and you’ll likely complete several without consciously deciding to do so.

Autolog recommendations are seemlessly integrated into the easydrive feature of the game – Need for Speed: Most Wanted allows you to accept and track challenges, customise your car and set destinations to races all within the game itself without ever needing to access external menus. The difference this makes to gameplay is noticeable and after experiencing just how easy and streamlined this is, you’ll never be able to go back to the clunky menu systems of racers past.

Gameplay wise, Need for Speed: Most Wanted offers a rich, deep experience which is without question the most enjoyable, fun experience I have ever had with a racing game. But to shoehorn Need for Speed: Most Wanted as just a racer does the game an incredible disservice. Most Wanted is so much more than that. Players could spend hours exploring the world, appreciating the nuances of every car they discover without even touching any of the available race modes. There is such a richness of experience to the world, so much to see and attempt and explore that simply free-roaming through Fairhaven could keep players entertained for hours. Add in the challenge of Most Wanted Shutdowns and police pursuits and you have a gameplay experience which is vibrant, challenging, deep, engaging, and just damn fun.

I’ve used the word enjoyable many times throughout this review, and if there’s one word that encapsulates my time with Need for Speed: Most Wanted, it’s enjoyable. Never have I had as much fun with a racing game as I have had so far with Most Wanted. The amount of maniacal glee I experienced taking down rival cars during races, and shutting down cop cars during pursuits should be criminal. At one point in my playthrough I was aware of my giggling and the massive smile on my face and how I must have looked to anyone watching me play – and I did not care one bit. Need for Speed: Most Wanted offers enjoyment in its most pure form, and it will keep you playing well into the early hours of the morning. 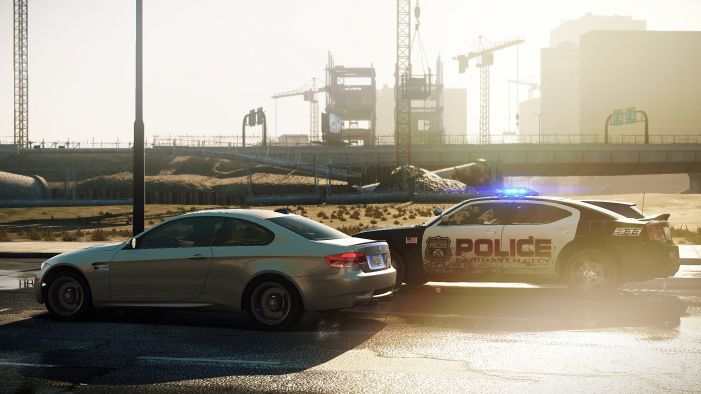 If you are a gamer who remembers the original Most Wanted and the incredible edge of your seat adrenalin the police chases offered – Criterion have replicated this feeling to perfection. What’s more, they’ve added to the experience to create police chases which will have you fist pumping the air in triumph after you successfully evade an intense police pursuit. This is the appeal of the Need for Speed Series – and Need for Speed: Most Wanted provides a direct shot of pure magic straight to your gaming heart.

Even the little things have been lovingly detailed and included – the radio station and on screen HUD will crackle and waver with static when you enter tunnels. Sunlight will reflect off your windscreen after recent rain to show a rainbow effect. Your controller will vibrate when you tackle particularly formidable off-road areas. All thse small details combine with the spectacular graphics and expertly crafted gameplay to create an experience that is sublime in its perfection. What’s more, the inclusion of Cloudcompete – which combines your Most Wanted progress across all platforms and allows you to rank up on one format and continue your progress on another – is an incredible feature of the game. With this system, any progress you make playing Most Wanted on one platform will be available for you to continue on another. It’s a fantastically inspired example of cross-compatibility and it’s one of the many reasons Most Wanted is so damn good. Another area in which Most Wanted shines is the soundtrack.

The songs included in the Need for Speed: Most Wanted soundtrack are the best selection of songs I’ve heard in a racing game. Perfectly balanced, with an exceptional mix of songs and artists. I challenge anyone to say there isn’t at least one song included that makes them bop along to the melody as they’re racing through Fairhaven. This choice of songs is inspired, combining old favourites with new hits and including such artists as Muse, The Chemical Brothers, Deadmau5 and Icona Pop. It’s a playlist you’ll look forward to listening to as you cruise the streets looking for your next challenge. 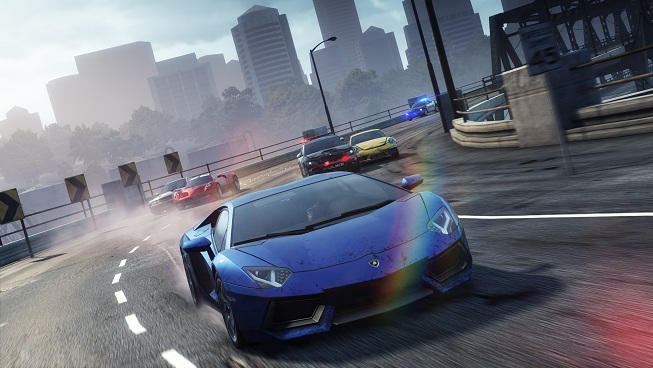 Need for Speed: Most Wanted offers an incredibly detailed and rich experience for anyone wanting to step behind the wheel of the variety of cars on offer. The depth of the experience ensures there’s something here for everyone, including those new to the series and series stalwarts. Criterion and EA have created a game so incredibly beautiful, so amazingly crafted that playing through Need for Speed: Most Wanted is one of the most enjoyable, rewarding video game experiences you will ever have. Fairhaven is gorgeously realised. Each car handles and feels ‘just right’. The challenges and races on offer are engaging, enjoyable and damn fun. The soundtrack is sublime. Online and social elements are masterfully woven into the game in a way that enhances and expands gameplay. And the combination of Autolog and Cloudcompete ensures the game will be one you’re playing months and months past release.

This is a game that does everything right, to create an experience that is pure magic. I can find absolutely no fault in Need for Speed: Most Wanted – it is everything anyone could want in a racer. This should be the game on every person’s christmas list and if you’re yet to experience it – buy it now. Need for Speed: Most Wanted is the elite of racing games, it is the pinnacle of the genre, and it is an absolute joy to play.