I know what you are thinking. Why is Scott reviewing that old game? Isn’t it full of 8 year olds smack talking each other? Doesn’t it have graphics that are 10 years old? Isn’t it a grind? Read on for the answer to all of those questions and more!

Ahhh Runescape. Mention this title to anyone on the internet and you will get equal parts nostalgia and ridicule. Most people played it years ago and no longer play it, probably because they grew up and play “real MMO’s” or they just hated the grind. When I first fired up Runescape years ago I just didn’t get it. The graphics were bad and I didn’t understand what was going on. Admittedly I didn’t give it more than an hour of play. But last year I decided to fire it up again because Runescape 2 had been released. I was pleasantly surprised by what I found.

If you are, “ahem”, getting on in years, like me, you probably played Ultima Online. Runescape brought me back to that style of play: sandbox, do anything, be anyone. This time though, Runescape had a tutorial and by the end I didn’t want to quit. In fact I played it for weeks on end, like someone addicted. What happened I thought? I’m too old to enjoy this game that is apparently for kids…aren’t I? But I came to this conclusion – who cares, fun is fun.

I started free to play and bought a month subscription to get more quests. As a free to play account you get quite a lot of stuff, but the quests in this game are excellent. The kind of excellent you would find in an adventure game, the kind of excellent that had me scratching my head and even looking up the answers on the internet (yes yes I know). I still look back on a quest I completed to solve a murder in a monastery. It took me a few hours, I looked and spoke to all the NPC’s, and I solved it by myself. I loved it! There was a little combat in it, but it was mostly a story driven adventure. This is what makes the quests so special. They aren’t all about combat, and some of them require you to complete unique activities that make you think. 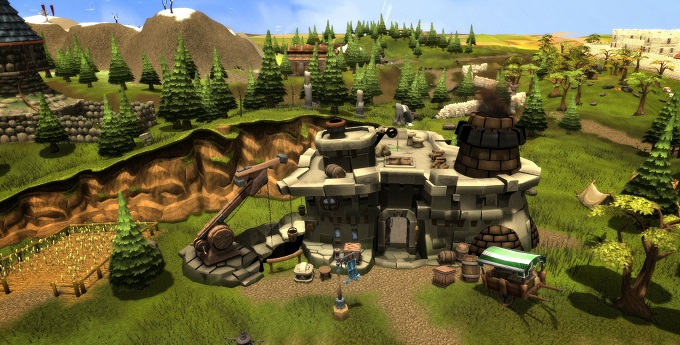 Runescape received a combat upgrade a few months ago which added the typical ‘press number 1-9 to use a special attack’ type of setup and changed the way armour and weapons worked. For the most part this has really improved the game. You receive more hit points from more armour now and more attack points from better weapons. Before this change it was click to attack and wait. The combat upgrade has made it a better game.

However, despite these positives, the game does have its drawbacks. Firstly, it’s grindy. Really, really grindy. I’m combat level 90 and it has taken me a fairly long time to get there. A lot of the trades, crafts or combat skills are nothing more than clicking on a box and waiting. Having said that, it can be relaxing:  chopping trees, making planks, using the plank to make furniture for your house.

Those that play the game are a mixed bag. Standing in popular areas and listening to the chatter it’s pretty clear that most of the players are under 15 and barely literate. I can live with that as I barely talk to anyone in this game. For me, it’s about logging in, finding some random quest or area and wasting an hour or so.

So how does Runescape score? The game world is huge, the quest are long and detailed, the combat has been upgraded and pretty soon it will be HTML5. The best bit? You can play free to start with and get a LOT of fun from the free version. If you decide to upgrade to member it’s around $7 a month. And that’s money well spent I believe.

Runescape scores an 8 out of 10. For more information on the game, check out its official website.