Until Dawn is the epitome of a slow-burning sleeper hit. Developed by Supermassive Games, this choose-your-own-adventure love letter to 90’s horror arrived on the PS4 with relatively little hype and a lot of detractors prior to release, but has rightfully earned considerable praise and popularity.

Until Dawn has slick presentation, engaging writing and gameplay focused on player choice.Highly addictive entertainment, memorable moments and lovingly-crafted atmosphere make it easy to put up with shortcomings, and mean the game can expect to feature in numerous “Best of 2015” lists.

The first thing that stands out about Until Dawn is how visually stunning and immersive it is. It draws you in without gimmicks, so the game genuinely feels like you’re in a horror movie. Character models look like their real-life counterparts, locations are detailed, and lighting is used to excellent effect. The mountain setting has constant snowfall and eerie moonlight that create a dark, brooding atmosphere.

This is heightened by the game’s fantastic score and sound design; doors creak, things go clunk, the wind howls, and strange whispers permeate the ominous drones and detuned strings which make up the majority of the music. Unfortunately the immersion is occasionally broken by frame-rate drops, awkward movement animations, and stiff facial expressions. 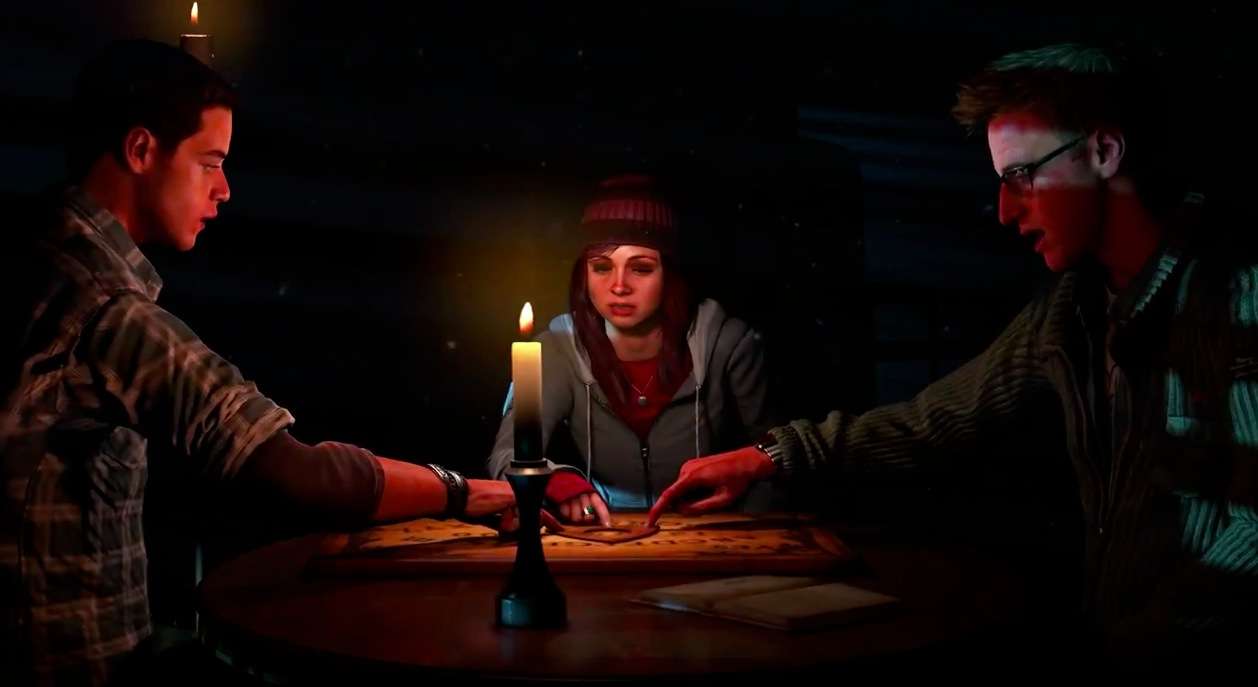 As a story-driven game with emphasis on choice and consequence, Until Dawn’s gameplay and narrative go hand-in-hand. Modelled off Quantic Dream titles such as Heavy Rain and Beyond: Two Souls, the controls are simple and unobtrusive, but can be clunky and even unresponsive at times. There are opportunities to examine objects, converse, survive (or not) action sequences, and make decisions. These are all seamlessly integrated into story progression, which aids in immersion and makes you feel part of the narrative.

Both the story and writing are excellent. Until Dawn does spit out a lot of horror clichés and some cringe-worthy dialogue, but its narrative is paced brilliantly and is full of exciting twists and turns. As a result, overlooking the more facepalm-inducing moments isn’t too hard. The restrained, slow setup also means you’re given time to get to know the characters, which makes their potential deaths more meaningful. 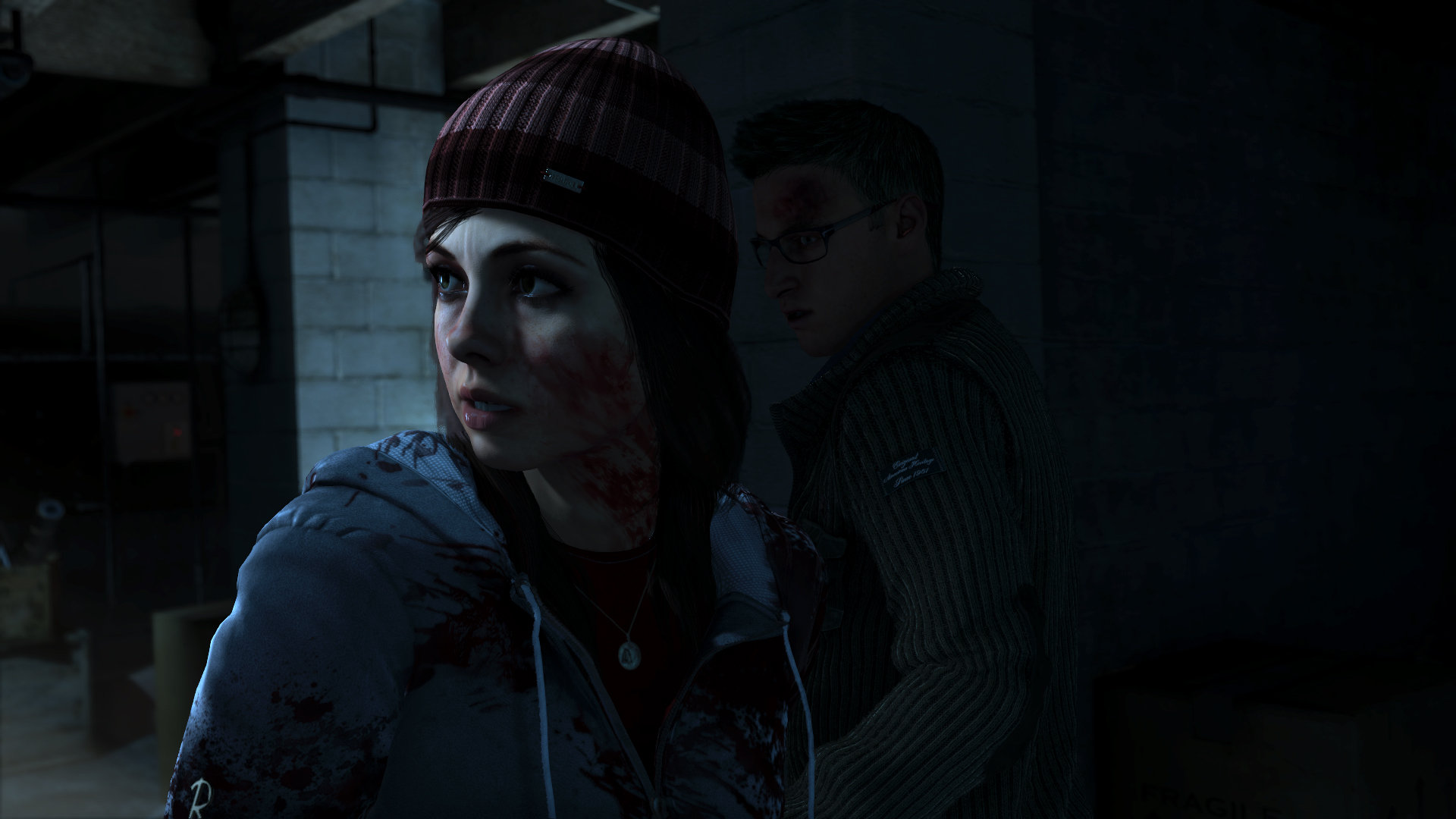 Whether you love or hate a character (and you will not love everyone), the time you’re given to feel something about them means if they die, you won’t shrug it off. The slow burn style of storytelling also makes the action sequences and moral dilemmas peppered throughout the game more exciting to experience, and especially pays off in the bombastic climax. Even though Until Dawn has its tongue planted firmly in its cheek at times with camp slasher-movie humour, there are plenty of tense or disturbing moments throughout the game, during slower moments and action sequences.

Until Dawn’s branching narrative is all about emphasising your choices and their potential consequences. This is implemented with the game’s Butterfly Effect mechanic, which keeps track of the actions you have taken and decisions you have made throughout the game, all of which inform how the story plays out. The key feature of this mechanic is that seemingly trivial actions and choices can have drastic consequences downstream.

Whether you experience a particular scenario and which characters are involved will depend on patterns of choices. Alongside the Butterfly Effect, character traits and relationships systems influence smaller details such as dialogue options and how characters interact with one another. To top it all off, you only get one save game, and cannot go back to a previous checkpoint, meaning that you have to own your choices and actions. 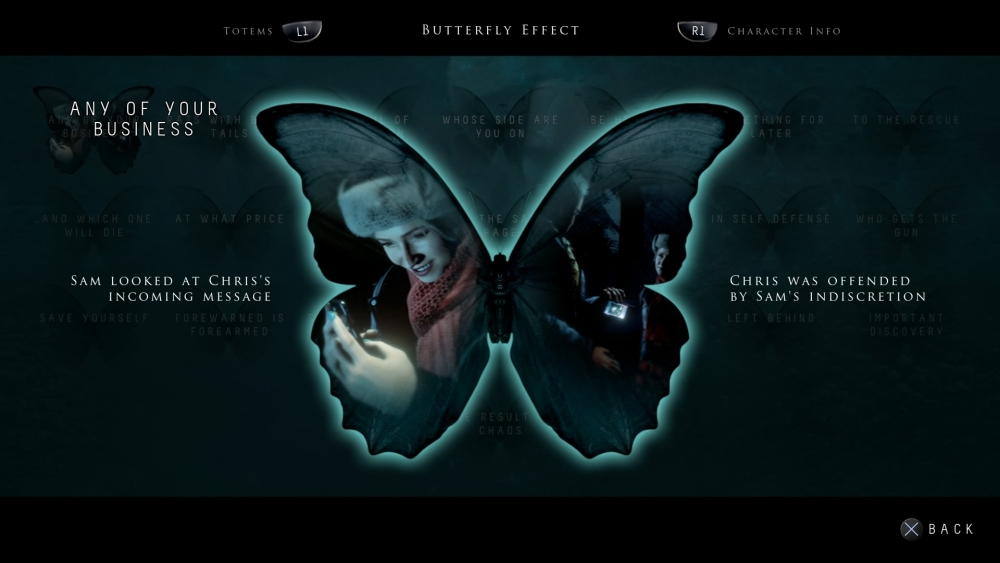 The game does a great job of not making it obvious until after the fact what potential actions or decisions are important for the Butterfly Effect and relationships/traits systems. No choices seem like an obvious “right” one, meaning that your first playthrough will have you second guessing almost everything you do.

This is a game that gets inside your head and makes you question your every move, constantly reminding you that who survives the night is mostly in your hands. I say mostly because subsequent plays show the story is more linear than you are initially led to believe. Any combination from none to all eight of the characters can survive the night and certain paths through the game’s narrative only appear if you after specific choice combinations, however key plot points (including the big reveals and twists) never change.

Action sequences are especially tense as it truly feels like messing up even just one QTE can spell certain death, but subsequent playthroughs make clear that the characters only have set times during the story where they can die. Two of them can’t die until the final chapter, which means mistakes during a number of the QTE-laden sequences (though not all) largely inconsequential.

This makes them more about experimenting to see what you missed the first time, rather than truly getting sucked into a vastly different story. That being said, the first playthrough truly is an intensely engaging experience full of difficult decisions, edge-of-your-seat tension and constant second guessing. It’s also a hell of a lot of fun to watch someone else squirm when they play the game for the first time. 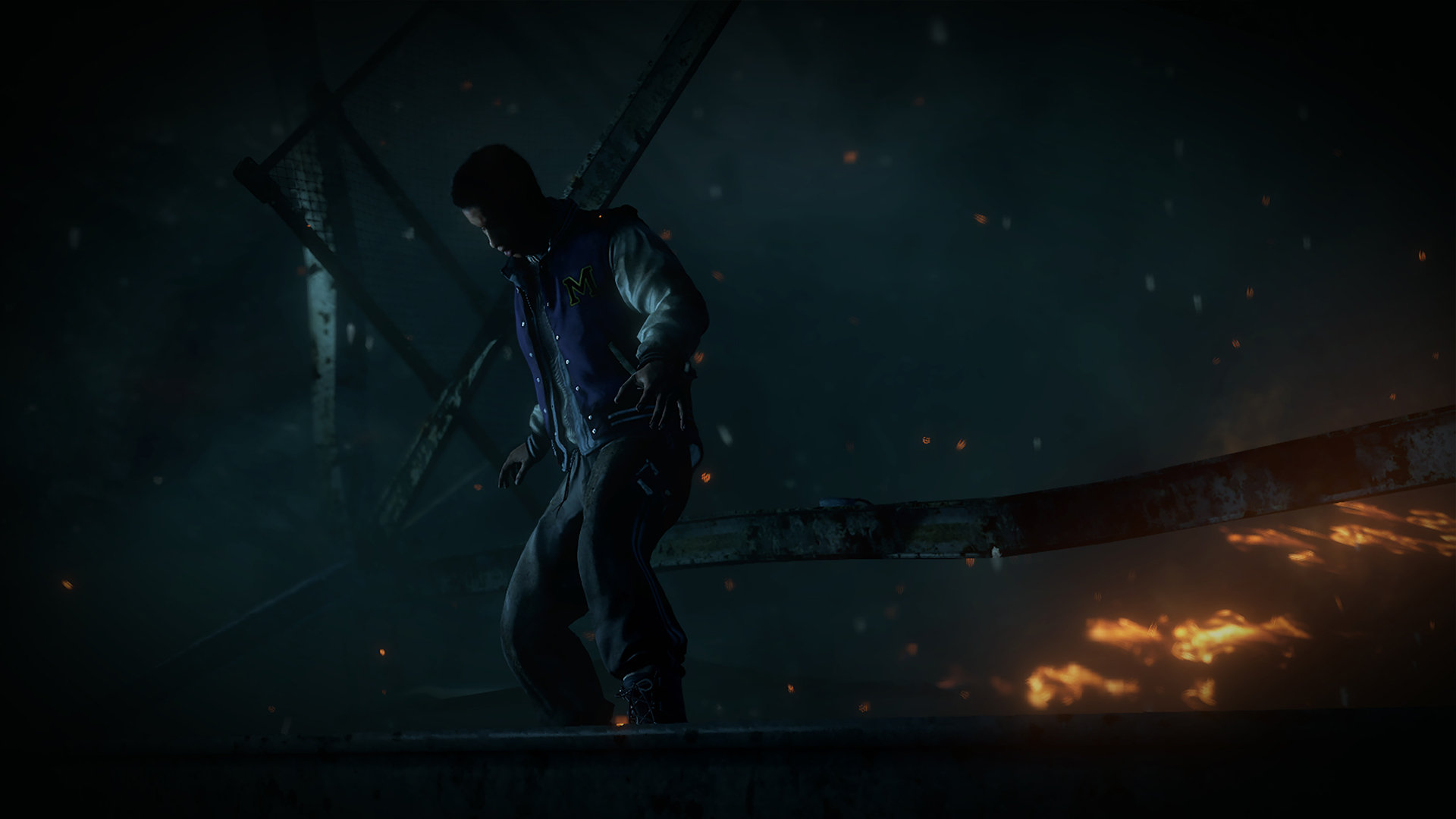 Despite its flaws, Until Dawn is a deeply immersive choose-your-own adventure horror story that has plenty of things to love about it. It is well worth experiencing, even if it’s just once.