Saints Row: The Third – The Trouble With Clones 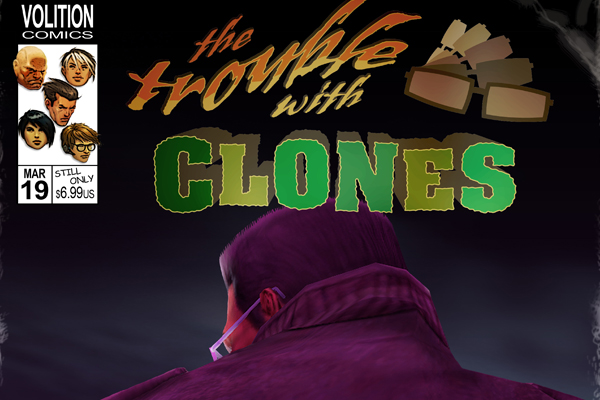 The Trouble with Clones represents the good and the bad of Saints Row DLC. Despite clocking in at 51 minutes total, the three missions that comprise TwC take you back to the sheer ridiculous of the main game. Unlike Professor Genki and Gangstas in Space, The Trouble with Clones fits in well with the overall storyline. I guess this means there are Saints Row: The Third spoilers ahead.

Since the boss can look like whoever you wanted him (or her) to look like, Johnny Gat was the marketing face of the Saints, with his image plastered in every Planet Saints that you enter. It seemed strange then that he was unceremoniously killed off camera in the second mission in the game. While Shaundi and Pierce mourn and swear revenge for their lost friend, newcomer to the series Jimmy Torbitson begins the process to clone him. He accidentally creates a Gat Hulk who, like the Hulk doesn’t understand what’s happening to him, and goes on a rampage. So it is up to you, the Boss to stop the Incredible Gat and calm him down.

What sets this apart from the other two DLC stories is that it is a return to the ridiculous cut scenes where it would make total sense for you to be given a shotgun that shoots a swarm of bees at fans of the Saints while Pierce is in a halfshirt singing about love and insufficient funds. Just…just go and read that sentence again. This is why I loved Saints Row: The Third. The story is at its best when you’re told what the problem is followed by your Boss pointing out the insanity of what was just said and then goes along with it anyway. The Trouble with Clones sounds like a comic book and the writers embrace that feel. Constantly you are listening to Jimmy’s narration of the events, with his sycophantic desire to be friends with the Saints eventually sounding like a bad Saints Row fan fiction, (or a good Saints Row fan fiction depending on your viewpoint). Finally the third mission gives you superpowers, complete with comic book BIFF! And POW! Icons whenever you punch someone.

After the myriad of vehicles and clothes you got from the other two DLCs, Trouble with Clones is sorely lacking. For your effort, you get some pretty easy to get achievements, two followers and a new vehicle. I can understand the game-breaking aspects of letting you keep the super powers given to you by the irradiated Saints Flow, but being able to use it in the main game would have made this DLC worth the price. Seven dollars is pretty steep, especially for not having virtually any rewards that you can use in the game afterwards. It would be difficult to suggest this over Gangstas in Space, which is longer. I wouldn’t say my Season Pass money was wasted, if for no other reason I can roll with Clone Gat, and Zombie Gat while wearing the Gat Mascot outfit and driving around in the Gat Mobile while on a TV next to me play Jin’s best episodes from Lost.