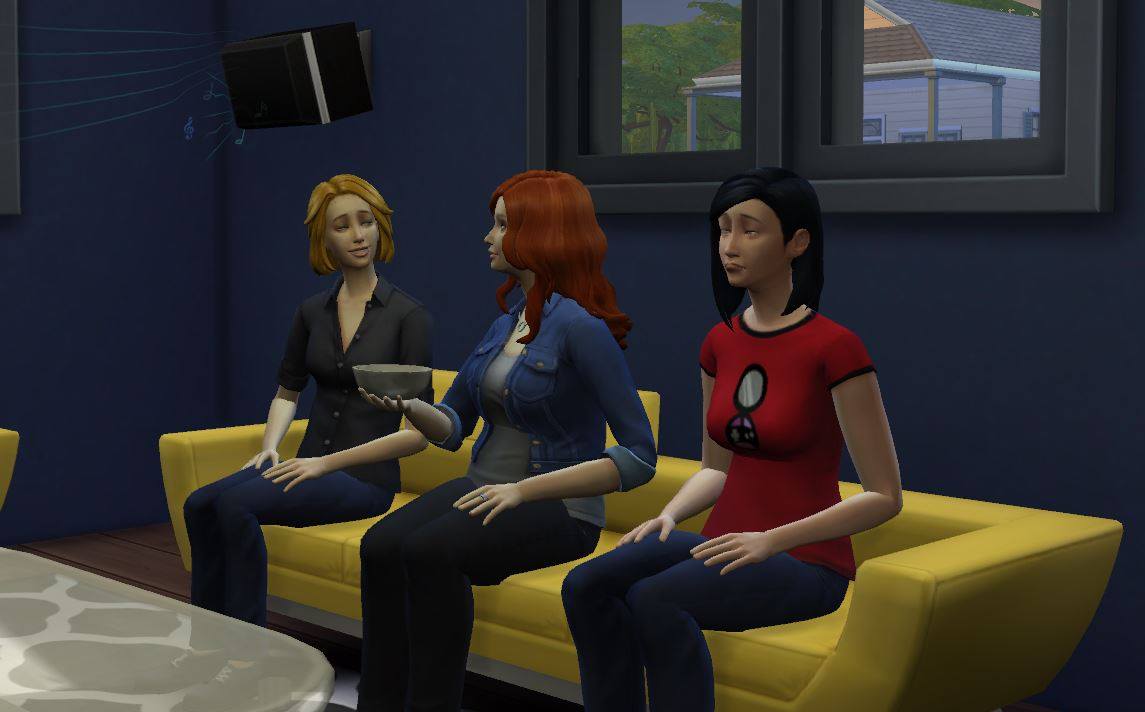 I have a love-hate relationship with The Sims franchise. And the reason I love it is also the reason I hate it – it’s incredibly addictive. With its simple premise of guiding a sim through their life, celebrating their successes and drowning their sorrows, the series has found a very strong fan base that gobbles up new releases as though they are mac and cheese delights cooked by a sim with a culinary skill of 12+. After turning my back on the series, I revisted the Sims to review The Sims 4, and damn if it hasn’t become more addictive than before.

Readers, I must level with you – I didn’t play The Sims 3. I played the first Sims and The Sims 2, but when I found myself playing my sim at 2am, with unwashed hair, wearing my pajamas and eating bowls of cheetos, I realised I needed an intervention. My sim had, at the time, a better job than I did, they had better friends and their love life was charting the cosmos whilst mine was lucky to get off the ground. I was enabling them to live the dream whilst I was looking down the rabbit hole of sad self pity. But enough about that dark time of my life. Suffice to say, after that 2am revelation, I realised I couldn’t continue the addiction that was The Sims 2, and I put a ban on all things Sims. The Sims 3 passed me by whilst I worked on bettering my own life.

And then The Sims 4 came out and I, perhaps foolishly, believed I’d grown as a person since my last foray into the dark, dark world of The Sims. I’d become a more grounded, more self-aware person who could manage their hobbies without becoming totally obsessed and addicted. Surely I could handle revisiting the sims without falling into that sad, sad pit of self pity right? That’s what I told myself as I loaded The Sims 4 and was pulled back into the vortex of Sims mania. And what a vortex it is.

My first mistake was spending hours on the character creation screen because I needed to have my sim absolutely perfect. In The Sims 4, you have a plethora of options available to you, allowing you to make all sorts of different individuals. The character creation screen is intuitive and enables you to easily create whomever you choose. Options are grouped in easy-to-understand categories, so if you want to focus on crafting your sims face, you simply click that part of their anatomy and hop to it. The randomisation button makes a return for those people wanting to simply jump into the action with minimal fuss, but the in-depth choices are also there for those of us who want to craft the perfect sim. The Sims 4 allows players to change a sim’s body shape simply by grabbing whichever area they wish to change and moving it with their mouse, and I must admit that the hair and wardrobe options in this iteration made my creationist personality practically giddy.

After attempting to create several sims and binning them after an hour of creation because they weren’t what I was looking for, I finally decided to get things over with and created an adonis sim with a body to die for, a dress sense and charisma to rival James Bond and a passion for loving and cooking. Basically, I created not me as a dude. And named him Alec.

With Alec created, I was ready to dive into the Sims 4. After years of intentionally avoiding anything and everything to do with the franchise, I took a deep breath and flung myself headfirst into the starting neighbourhood. Or at least I thought that was what I was doing. I had forgotten one key thing about the franchise – the tutorial. The tutorial that seemed to never, ever end.

I can’t comment on the previous game’s tutorial as I never experienced it. But if it is anything like the Sims 4 tutorial, I expect the majority of players simply skipped it, turning off its irritating help bubbles and jumping into the action unaided. I’ll admit that for the first 10 minutes of the tutorial, it is actually helpful. It points out the main areas you’ll need and provides helpful assistance in navigating the menu’s and buttons. But after 10 minutes, I wanted to play the game rather than be shown how to play the game, and as a result the incessant prompts to press a particular button or click something to demonstrate I understood how my mouse worked became too much for me. I shut it off and started The Sims 4 in earnest.

The first thing I noticed was how streamlined the game was. From the build screen to navigating your interaction options to selecting actions for your sim to complete – everything in The Sims 4 is easier than what it was in previous games. In the Sims 4, I don’t have to instruct my sim to make the bed when they wake up, they simply do it. Another improvement is that Sims can now talk to other sims whilst they complete actions like cooking or watching television, without having to stop what they were doing to speak with the person sitting next to them. Eating dinner? Your sim can now text their friends whilst they finish that black and white cake that only has 1 hour to go until it’s spoiled.

Whilst the game itself is streamlined, your options in some areas have been expanded – there are now a greater number of action options and more ability for your sim to live their lives without getting into the routine of wake – shower – eat – work – sleep and repeat as needed. The Sims 4 introduces a greater emphasis on moods and emotions for your sims, which expands the core gameplay, and provides a new way to experience the game. Gone are the days of simply ensuring your sims mood bars are in the green. Now, your sims can experience emotions and become inspired, which will in turn affect how well they do at day to day tasks, in addition to opening up a whole new range of interactions and actions. Think showering is boring? The Sims 4 allows you to choose whether your sim has a normal run of the mill shower, or gives you the option to choose a thoughtful shower, a brisk shower or a steamy shower, which each option altering your sims mood. As a romantic sim, my Alec was always in a flirty mood, but the added emotions to the game enhanced his abilities in this area and allowed me to really play him as a charismatic don juan.

With that said, when the Sims 4 was first released, the game was critised for the removal of particular ‘core’ features that had previously been included in the series – things such as swimming pools and swimwear and the toddler life stage. After spending a considerable amount of time with The Sims 4, I find this a hollow criticism of a game that has otherwise improved on its core elements. Do I find myself enjoying the game less because my sim cannot swim or interact with toddlers? Not really, no. The other aspects of the game, the improvements that have been made to the menu’s and to the completion of actions, go more towards increasing the enjoyment of the title than the omissions of ‘core’ features go towards reducing it.

The actions included in the sims have also been expanded, and completing certain actions now allows your sim to level up that particular skill – so if you want your sim to be a comedian, you simply tell enough jokes successfully to level up that skill. If you want your sim to be a singing whiz, you use every opportunity you can to belt out a tune, whether that’s in front of others or in the safety of your own home. As with previous sims games, buying particular items allows you to practice your skills and level up your abilities, but if you’re a cheapskate sim who doesn’t want to splurge, you’re able to visit community lots and use their facilities to level up your sims. The community lots are also where you can go to meet and greet other sims, beginning friendships and potentially finding that soulmate your sim has been searching their whole life for. Just don’t make the mistake I made with Alec and flirt with every single female sim – this appears to make them think they can pop by your house whenever they like, which gets annoying very quickly, especially when you’re trying to seal the deal with your squeeze of the moment and your other lady friends arrive unexpectedly. I know Alec is irresistible, ladies, but at least give him some time to flirt with other women, ok?

One major area that has seen the largest improvement is the build mode. Now no longer just about building houses and furnishing them, the build mode allows you to indulge your inner architect, with options themed by function and room, and now easier than they ever have been to incorporate into your sim’s house. One thing I absolutely loved – the build mode now allows you to build and buy a completely furnished and styled room to fit right into your house. Need a kitchen but you can’t be bothered spending the time to create it? Now you can simply purchase a pre-made room and slot it into your house with minimal fuss. It’s magical!

There’s a lot more I could say about The Sims 4, but in essence, I really enjoyed my return to the series, and I would recommend that anyone who is curious about the game give it a go. At its core, it’s a game about enabling your sim’s lives, about watching them learn and live and grow, and the enjoyment you find with the game will inevitably be tied to the way that you play it. The Sims 4 caters to both perfectionists and the more….lazy of individuals amongst us, and it improves on core elements of its predecessors without crimping on gameplay elements. Yes, there are some key features that are not present, but their exclusion doesn’t dampen the enjoyment of playing, and the inclusion of new elements more than makes up for any slight regarding their removal.

For its simple, but engaging gameplay, its improvement of core features, and its focus on community creations, The Sims 4 scores a very commendable 8 out of 10.

As a bonus to accompany this review, our lovely Jen created a Save Game household (of myself, Jen, Joe and Christine) and left them to their own devices. The video below is what happened.