Sins of the Flesh Review 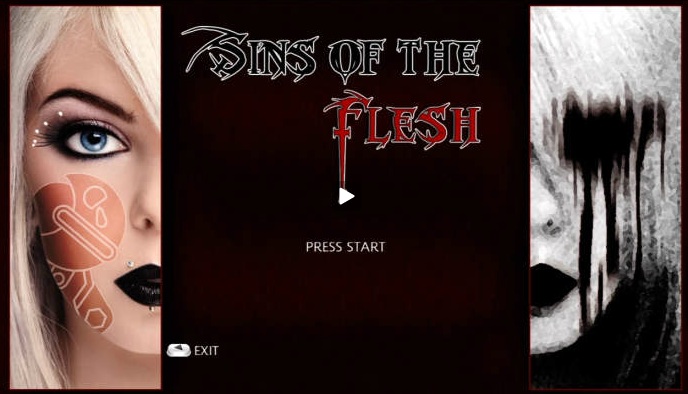 I was browsing through the Xbox Indie titles and saw Sins of the Flesh, a new release by Silver Dollar Games.  The name itself sounds rather sinister, and when I took a look at the tagline, the game intrigued me even more; I had the feeling there might be something more to it than I presumed. My intuition was right, and I was pleasantly surprised by this inconspicuous game.  Sins of the Flesh is not long, nor is the gameplay complex, but the game shines in its story and atmosphere.

I find the narrative brilliant.  Simple but brilliant.  You play a silhouette of a man, somebody who is caught in a limbo of life and death after being in a car accident.  Sprites want whisk you away; white ones want you take you to heaven, black ones wish to carry you to hell.  As you fight your way past the enemies, there are two spirits who talk to you.  Through the discourse between the two, you discover the game’s namesake: the reason you are in limbo is because you screwed around too much in your lifetime; you apparently used people for sex and lived frivolously.  But there is still hope, or so the heavenly spirit tells you. While she asserts that you were a good person who can be redeemed, assuming you live long enough to return to Earth, the demon keeps taunting you to give up.

The narrative is diegetic, thus you are told what to do, what is happening, and what your life on Earth was like.  But at the same time there’s so much left unsaid.  Are what the spirits postulating actually true?  Was my character really that bad of a person?  Was his lust the sole factor he is in limbo?  Should I give up trying to get back to Earth?  I love games such as this, ones that make me question my character’s motives and authenticity of living. 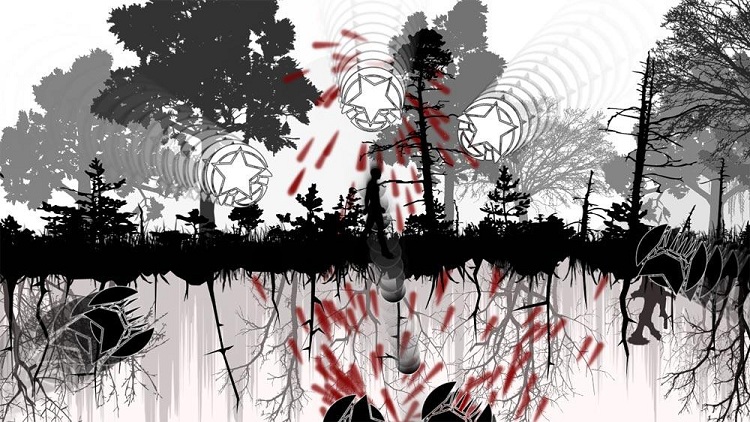 Silver Dollar Games also deserve kudos for their marriage of 2D animation and real-life graphics in the form of photos.  The primary visuals are silhouettes in their white, black, and grey colour palate, perfect for the nebulous area of purgatory.  Coloured photos are scattered about later in the game, but it doesn’t feel fragmented from the environment, and rather serves as a connection to the living world from which my character is disconnected.  I especially loved the style of the bosses—they are in 2D, and look more cartoonish compared to the rest of the world, but they’re wonderful.  Even the written prompts for the narrative’s choices have a suitable font, and gave me the shivers in their presentation.

Sound helps play a part in establishing atmosphere, and Sins of the Flesh manages to hit a note on this one too.  From the theme on the title screen, to the real-world sounds connecting you to reality, all are appropriately timed and contribute to the atmosphere.  Of special note are the voices of the demon and spirit helper; I was expecting some awful, cheesy voice acting, but I was pleasantly surprised.  Then wowed.  Furthermore, most of the dialogue is well written, and better than in some other games I’ve played.

Gameplay is linear and simple.  You walk across the screen automatically, and with the left and right analog sticks, you control the direction of the attacks.  Left controls the black beams for demons, white beams are for attacking angels; these are actually dually controlled.   During particular times a prompt to press the A button comes up, which causes an action to occur.  Some are mandatory, others you can choose to ignore.  I found there was a slight lag between hitting the analog sticks and shooting attacks, and things get chaotic, what with all the spirits, beams, and blood flying across the page.  As a result, I felt that I couldn’t appreciate the visuals as much as I wanted.  But it in no way makes the game unplayable.

This game is only 80 MS points.  It takes probably 20 minutes to get through; it is awesome and worth your time if you are looking for something new and/or different.  I hope to see more like this from Silver Dollar Games in the future.