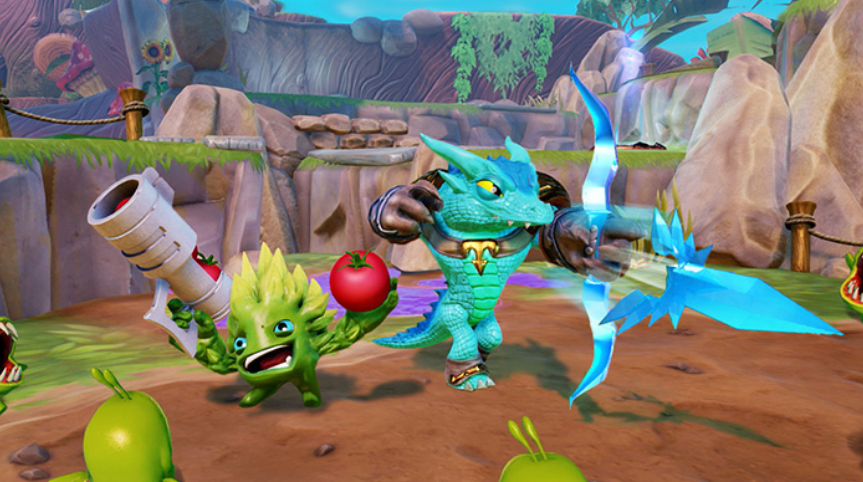 I’ll be the first to admit that I have absolutely no working knowledge of the Skylanders video games. I came into reviewing Skylanders Trap Team as a complete newbie, with no prior conceptions of what to expect. After playing through Skylanders Trap Team on the Xbox One, I can safely say the game has entranced me, and left me with that kind of excitable glee normally associated with the opening of gifts on Christmas Day.

Skylanders Trap Team is the fourth instalment in the skylanders video game franchise, but for folks like me who have never played any of the previous games, you don’t need to know any of the backstory to really enjoy this one. The game catches you up with what has previously occurred by using a funky introduction video that discusses the main points of the plot. Kaos, the creepy bald-headed baddie of the previous game, has blown up Cloudcracker Prison, thereby releasing all the nasty villians who had been imprisoned there. In addition to freeing these baddies, the destruction of Cloudcracker Prison also sends all the Trap Master Skylanders (who are basically elite level good guys) and the Traptanium used to build the prison to Earth. Taking on the role of Portal Master, you as the player must use the Trap Master Skylanders and the Traptanium shards to trap the escaped baddies.

It’s a simple premise and an easy setup, and whilst this is at its heart, a kids game, it’s still a lot of damn good fun for adults. Gameplay is similar to previous games, where you play as a variety of characters by placing toy figures representing these characters onto a fancy light-up USB hooked up portal thing. I’m told the correct word for the fancy portal thing is “Traptanium Portal” and that it uses a near field communication-enabled interface. Regardless of what it’s called, it’s a bunch of fun to place the toy figures on the portal and see them come to life on screen, and I can see how this could be endlessly appealing to kids. Whilst the use of the portal has been seen in previous Skylanders games, Trap Team introduces a new gameplay element with the trap. Whilst the skylanders figures (which are bought separately to the game, of course) allow the representative characters to be played in game, the traps are used as storage devices for up to 46 enemy characters that are encountered in the game. Once trapped, these baddies can be controlled and played as good characters. The inclusion of this new element means gameplay never becomes boring, and even if you choose not to shell out money on more skylanders figures, the use of trapped enemies means you’ll still see a bunch of variety in game. Another awesome little touch is that the Traptanium Portal not only lights up but also has a speaker included in it, so that once you trap an enemy, their vocals move from the screen to the portal. Whilst these enemeies have a limited range of lines, it’s a neat little addition to hear your trapped enemy commenting on your gameplay as you progress through the story. Trapped enemies can also be taken to other consoles, which is great for bringing your favourite enemies to your friend’s place as part of your next Skylander’s team up.

In essence, the inclusion of playable bad guys by trapping them means you have two different ways to play the game – use either the good skylanders and trap masters, or put the bad guys to work. Regardless of your choice, both skylanders and the evil baddies will level up the more you play as them, allowing you access to better and more powerful fighting moves. Smashing everything in your way will also net you currency that you can use to purchase fighting moves. Each character has its own skillset and unique play style, so that each character feels different as you traverse the areas. As you progress through the story, you’ll find the characters that work best with the way you wish to play, but discovering new characters and trapping enemies means you’ll always have a variety of choices regarding what characters to use. One cautious note, however – experience points and currency do not transfer across characters, so whatever you earn as one character is in essence locked to that character. This means that if you begin to favour one character over another, this character will quickly surpass the others in terms of level and currency to spend on skills. If you want to keep your stable of skylanders at around the same level, you’ll need to swap them out often, which may not happen if you become taken with a particularly awesome skylander. And there’s a heck of a lot of new Skylanders to play.

Trap Team features 16 new Trap Master Skylanders, 16 new core Skylanders and another 16 mini Skylanders, who are basically smaller versions of the core Skylanders. Factor in the 46 enemy characters you can also play as, and this creates a veritable plethora of characters to use to explore the game. Trap Team doesn’t provide the player with completely unfettered choice, however – only Trap Masters can traverse certain locked areas of the game, and whilst the game does ship with one Trap Master, if you want to explore other areas of the game, you’ll need to buy Trap Masters representing the other elements. Yay for marketing, right?! There are also limits placed on how long you can use trapped enemies. Trapped enemies have an energy bar that, once depleted, means they cannot be played as again until their energy bar recharges. So if you find an enemy you particularly enjoy playing as, you’ll also need to have a back up Skylander to swap to once your energy depletes. Given that villains are more powerful than Skylanders, can be stored in the Villain Vault located in the game’s home base, and have hidden quests that once completed unlock special upgrades, you’ll likely want to spend at least some time playing as a villain. This is especially true given the villians are often the most amusing out of the characters. And truthfully – who doesn’t want to play as a sheep with canons stuck to its side? And for those who feel icky playing as a baddie – never fear. Those hidden quests I mentioned? They’re technically ‘redemption’ missions which, upon completion, reward your ex-nasty badguy with a special new upgrade. But back to the sheep with the canons on its side… 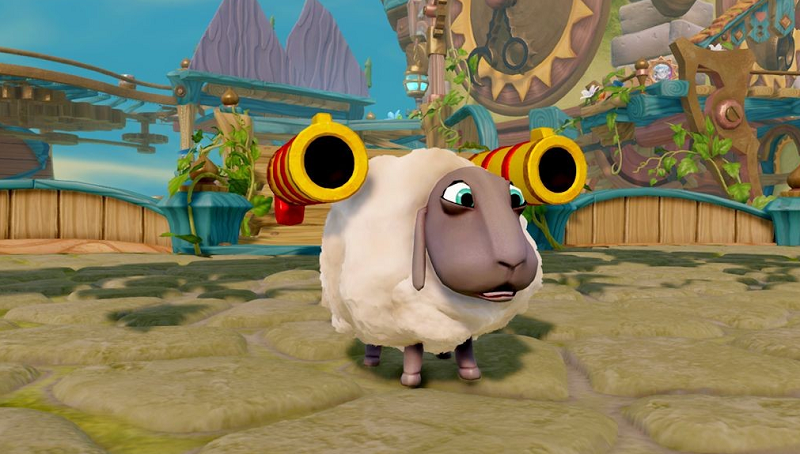 For those wondering just how the game keeps the enemies trapped – in order to trap a baddie, you’ll need a trap crystal that matches that baddie’s elemental group. So if you find a life baddie, you’ll need a life crystal to trap it. The base game only comes with two types of crystal – life and water – meaning if you find baddies of another element you want to use, you’ll need to buy the relevant element traps. Oh hey – more marketing! Thankfully, you don’t need to buy lots of same element crystals, as whilst each crystal will only hold one villain at a time, excess villains can be stored in the Villain Vault and swapping them back into the crystal is a simple matter of visiting home base to place them into the crystal. Not having the correct crystal then and there also doesn’t pose an issue, as you are able to claim the baddie as a bounty and hold it in the villain vault until you can unlock it with the right crystal. Whilst I appreciate this, the requirement to buy the element crystals you don’t have to trap baddies of that element does place limits on how many characters you can play as, if you don’t want to spend the extra money.

Skylanders Trap Team looks exceptional on the Xbox One, and the vibrant colours and cartoony game worlds appeal to both children and the child within us all. Whilst it might be said that my inner child is a little closer to the surface than other people’s, I had a lot of fun playing Skylanders Trap Team. Although the gameplay is simplistic, it’s not a pushover, and sometimes it’s nice to simply enjoy a fun game with amusing dialogue and vibrant colours without having to worry about overly challenging gameplay. I started my playthrough of Skylanders Trap Team without having played any of the previous titles, but the enjoyment I gained from the experience means Trap Team definitely won’t be my last Skylanders game.

For enjoyable gameplay, amusing and well-designed characters and beautifully vibrant game worlds, Skylanders Trap Team scores an 8.5 out of 10 and earns a Save Game recommended badge.

Now if you’ll excuse me, I need to journey to the local video games store to buy more of these Trap Masters. My new addiction has begun.