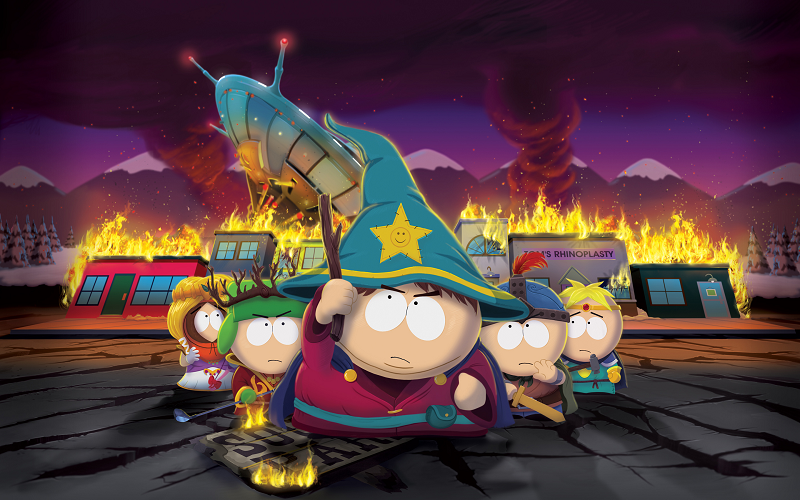 The game itself starts simply enough: you are thrown into the wilds of the town of South Park after being told by your parents to make some friends. You soon stumble across the denizens of the town and learn that many children of South Park are involved in a fantasy role playing game set around the town. These kids are all fighting to grab hold of the mysterious Stick of Truth, which they say ‘controls the universe’. Joining Cartman’s group, you choose your class and set off recruiting Facebook friends with the dubbed title of “the new kid” or “douchebag”.

Right from the very beginning, you’ll notice one thing: everywhere and everything is a tribute to some South Park episode. You may walk into a house and hear Terrance and Phillip farting on the TV screen, you may be searching around the town finding Chinpokemon or even run into a familiar character like Mr Slave. For the fans of the show, It’s a true joy simply walking around the map and seeing sights such as Tweek’s Café, the school and most of all Canada!

But that doesn’t mean the game is just for the South Park fans. South Park: The Stick of Truth creates its own jokes, making fun of pop culture in general. There are references to Skyrim, Facebook, Game of Thrones, other RPG’s and more. Each and every gag shows how this whole game is made for people to laugh and this enjoyment is spread throughout both the main quest and side missions.

Gameplay wise, there are four classes you can pick from: thief, mage, fighter and Jew, but sadly there is little difference between them. The only thing that makes them slightly unique are the moves you can perform using Power Points (aka PP). Unfortunately, as special attacks mostly have the same effect as moves from the other classes, your choice of class can feel somewhat redundant. Balancing this sense of redundancy, as a player you aren’t restricted via chosen class to use particular equipment or weapons since there is nothing that is exclusive use only for a particular class. Despite this somewhat flawed class system, there is still joy to be had in the fighting mechanics. 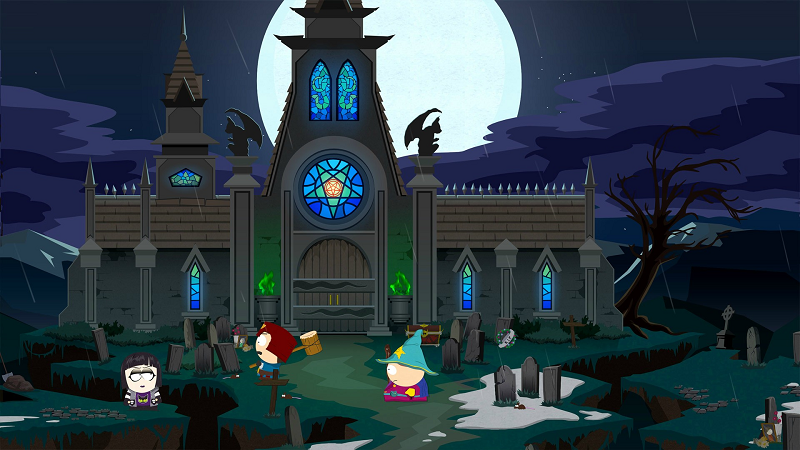 The combat featured in South Park: The Stick of Truth is turn-based. Whilst this can be dull when not used correctly, in The Stick of Truth this turn based approach to combat absoultely shines. Fights require a level of interactivity, executing a move by timing a tap of the buttons with a visual and sound cue. To cause the most amount of damage or to block opponent’s attacks, you will have to press the button required at exactly the right time using visual and sound cues. Nailing this is absolutely essential to winning battles especially when blocking. Enemies are able to deplete your health enormously when you fail to protect your character.

Another great feature, which requires a bit of patience, is using your environment to take out enemies before you even set foot into battle. Little things like shooting a hanging shelf that is right above your opponent can neutralise them, allowing you to skip combat and still gain experience. This gameplay addition kept me engaged for longer, always looking for that one thing in the environment to manipulate to my advantage. Even just shooting your enemy before battle stuns them, giving you that small advantage before the game has even begun.

South Park: The Stick of Truth is a hilarious, engaging game that does everything a game should. As an added bonus, gameplay isn’t compromised for the story, which many Movie/TV tie in games usually do. South Park: The Stick of Truth provides an amazing, enjoyable experience and I recommend it to anyone who can take in and appreciate the crude humour.