Spotlight on – Gunner Runner by Ghostbox

It’s been a busy month for the video game industry, with triple A launch after triple A launch following one after another these past weeks. As exciting as these releases have been, we here at Save Game believe it’s just as important to shine the spotlight on other, less voraciously marketed, yet no less polished or enjoyable releases – and we’ve found one such release in Gunner Runner.

Gunner Runner is a deceptive little game – available for iOS it appears to be an endless runner, but in reality it’s a hybrid runner and FPS, which tasks the player with providing cover to the hero as they evade bad guys, collect coins and free hostages. Created by indie games studio Ghostbox who are based in Brisbane, Gunner Runner is a charmingly addictive adventure which will worm its way into your heart through it’s cheeky art style inspired by Saturday morning cartoons and it’s funky 70s influenced soundtrack. You’ll soon find yourself falling into the ‘just five more minutes’ mindset as you attempt to keep the main character – Jet Pilot Jenna – safe from enemies whilst simultaneously directing her to collect coins, rescue hostages and steer clear from environmental hazards designed to slow her progress.

Ghostbox themselves state Gunner Runner features intense action and this is well and truly accurate – during my time with the game I could feel my adrenalin pumping as I tried to fire at enemies and keep Jenna away from hazards yet still collect coins and save hostages. I was surprised to find after one challenging  stage that I had found my way to the edge of my seat – the game truly is intense as well as being a mini workout for your multitasking skills. 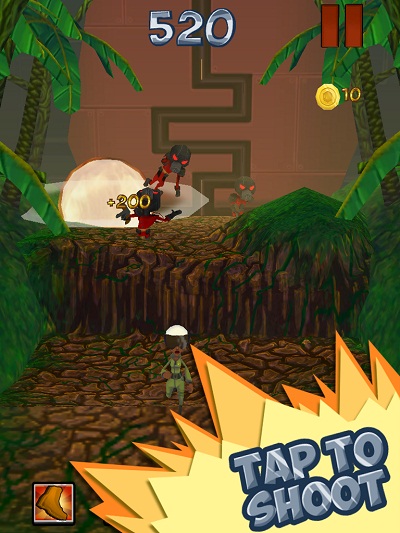 Whilst Gunner Runner is challenging, it is never frustrating and this is a very important distinction to make when it comes to mobile games. Some of the stages do require concentration and skill, but not reaching all your objectives simply makes you want to retry the stage for a better score rather than give up in frustration.

Perhaps it is the quirky visuals or the funky 70s score, or maybe it’s the gameplay itself which makes Gunner Runner an incredibly fun title you can spend five minutes or several hours with and still have a fantastic and rewarding time. There’s something here for everyone – whether you’re looking for a quick, accessible five minutes of action or a longer, more challenging session.

The team at Ghostbox – eight innovative and forward thinking animation and game design graduates from the Queensland College of Art – have created a fun, quirky, enjoyable iOS game in Gunner Runner that offers an easy to learn yet challenging to master diversion from your day to day routine.

Gunner Runner is out now for iOS and can be found on the App Store. The team at Ghostbox have released a launch trailer for the game, which shows Gunner Runner in action – you can find this below.

For more information on Gunner Runner, or to find out more about Ghostbox themselves, take a look at their Official Website. Gunner Runner is an enjoyable, quirky, challenging and intense runner FPS that I had a blast playing.