The Escapists – The Save Game Review

From clunky antiques like Maze Craze on the Atari 2600, to modern masterpieces like Grand Theft Auto 5, crime has always been a popular theme to build a video game around. But the vast majority of these games revolve around the criminal activity itself. Very rarely does a game focus on what happens after the criminal has been caught. The Escapists is a uniquely bold exception to that rule.

The Escapists takes a much different approach to crime that most video games. Instead of pulling off heists, having shootouts with police, and generally causing all sorts of mayhem, this game takes place after you’ve already been apprehended, and thrown behind bars. But just because you’re in prison doesn’t mean your life of crime has come to an end. In fact, it’s just beginning. As the name implies, The Escapists is all about freeing yourself from captivity. Going about this will take ingenuity, luck and a whole lot of patience.

The Escapists is presented in a charmingly retro 8 bit, top down style that will instantly remind you of classics like Legend of Zelda and Dragon Quest. Much like those games, the focus of The Escapists is exploration, collecting and character building. But instead of dungeons, castles and wilderness, your exploration is limited to the spaces within the prison walls. And it’s not just the physical boundaries that limit you. You’re also bound by the strict routine of prison life. Every day unfolds in the exact same way. There’s morning roll call, breakfast, work time, lunch, exercise, and a number of other required activities that you must take part in. If you don’t, the guards will hunt you down, and you’ll start earning a bad reputation. These daily obligations place a limit on your opportunities to explore, and make your free time all the more valuable. 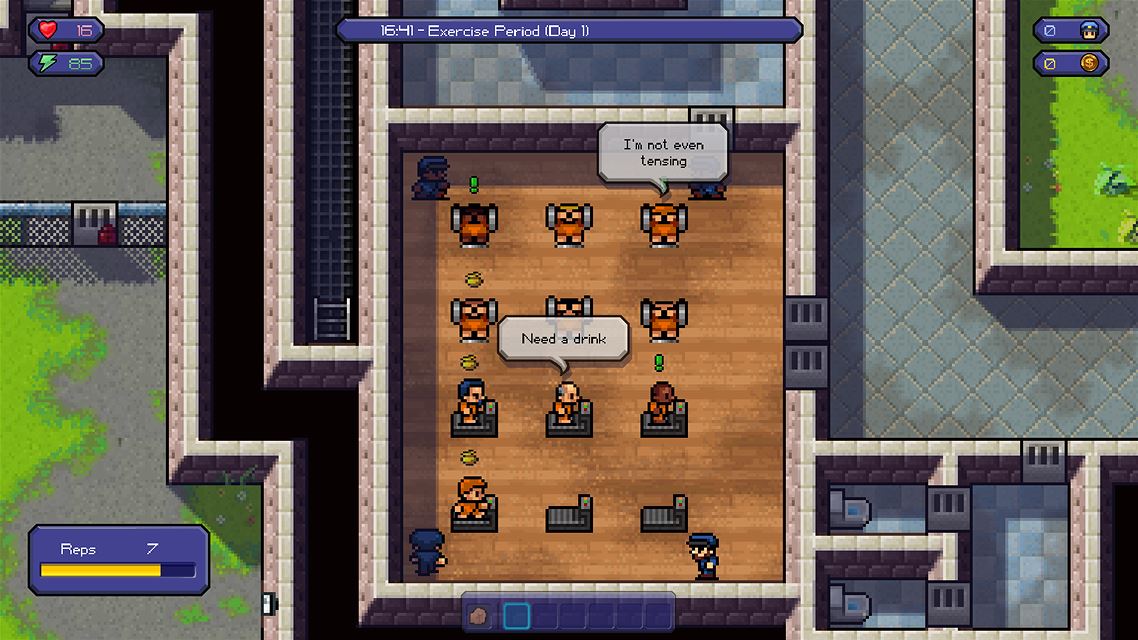 It is during these free periods that most of your progress can be made. You’ll spend a lot of time collecting objects. Everything from toilet paper to guard uniforms can be scavenged, and they all serve a purpose. Figuring out what their purpose is, however, can be a challenge. By themselves, most of the items you find have little value. Instead, you’ll have to combine them through crafting to create useful tools. There is no crafting guide, and no hints are provided to help you, so successful crafting depends entirely on trial and error. For example, try to combine a toothbrush and a razor blade, and you’ll get nothing. Throw in a lighter to melt the toothbrush, and you’re still out of luck. Turns out, you need glue instead. The only way to figure this out is to keep trying different combinations of items. But don’t take too long. Guards can shakedown your cell at any time, and confiscate your entire collection. The result is a vital game mechanic that quickly becomes tedious and frustrating,

You’ll also be able to interact with other inmates, taking on jobs which can consist of anything from finding a lost item to beating someone up to settle a grudge. These tasks reward you with items and money, which help you along the path to freedom. Much like crafting, progressing on that path consists largely of trial and error, and unless you’re a prison breaking savant, your attempts will often end in failure. At first, I attempted to break out through the ventilation shafts, but every action I took opened up a new problem. Open the vent, and the guard will see you. Use a bed sheet to hide your cell, and the guard will peek inside and find you’re not in bed. Use a pillow as a body double, and the guard will still notice the open vent. I ended up having to google a solution, which involved creating a paper mache vent grate out of toilet paper and glue. Yeah, that makes sense. Every failure to escape results in you getting thrown into solitary for days, and the loss of all your items. I found this to be far more punishing than necessary, especially since it took me hours to prepare and enact my plan. 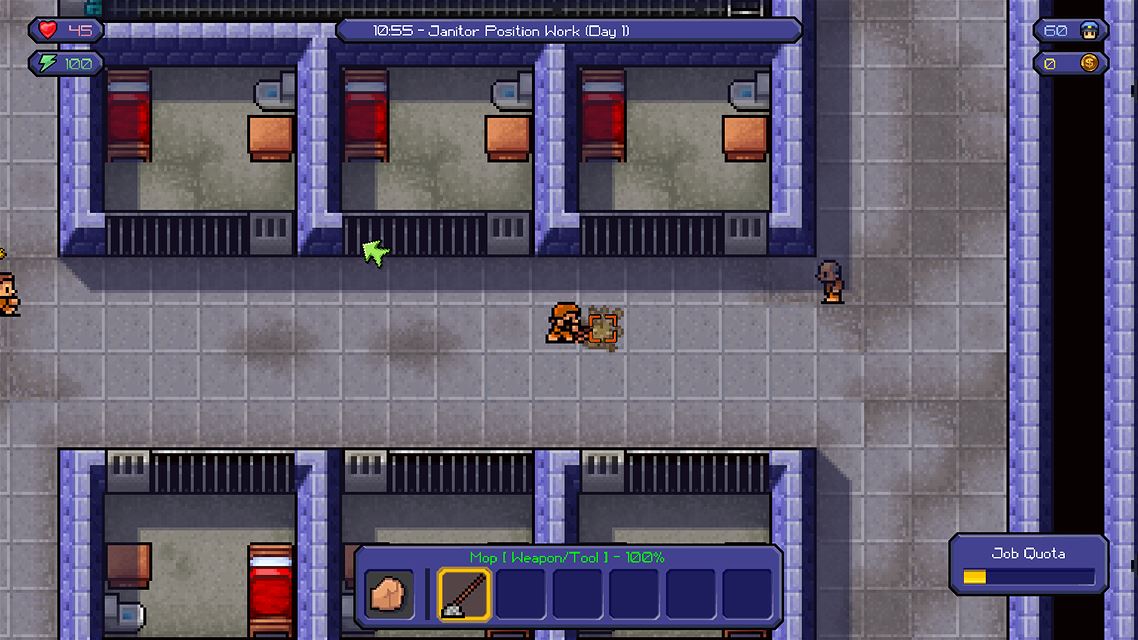 Of course, you don’t have to escape through careful planning. Another method is to simply spend a lot of time in the gym to build up your strength, then start a riot by knocking out every guard in the place. You can then steal a key, and stroll out the front gate. But I assume this isn’t what the developers intended, and anyway, it only seems to work on the first prison you encounter. Naturally, the better you are at escaping, the tougher the prisons become.

I appreciate what the developers tried to do with The Escapists. It’s a bold step back to the days when games didn’t hold your hand, and provide you with everything you needed to succeed from the very beginning. It was a bold choice to make, and I respect any developer who is brave enough to release a game that doesn’t make any compromises. The problem is that I simply didn’t have fun playing The Escapists. Once the nostalgic charm wore off, I was left with a game that seemed to be actively working against me, punishing me for the slightest mistake. This would be forgivable if the gameplay was enjoyable, but the repetitive daily grind became an endurance test after a few hours. That being said, there are undoubtedly many who will enjoy The Escapists very much. While it might seem like a stretch at first, the game shares many qualities with Dark Souls. The learning curve is brutal, and despite your best efforts, you will fail again and again and again. But finally achieving what felt like an impossible victory is undeniably thrilling, and anyone who enjoys games where the deck is stacked against you should definitely give The Escapists a try. But for me, the rewards just weren’t worth the trouble. I give The Escapists a 6 out of 10.

The Escapists can be purchased for Steam, GOG and Xbox One.