Time to Rev up the Harley 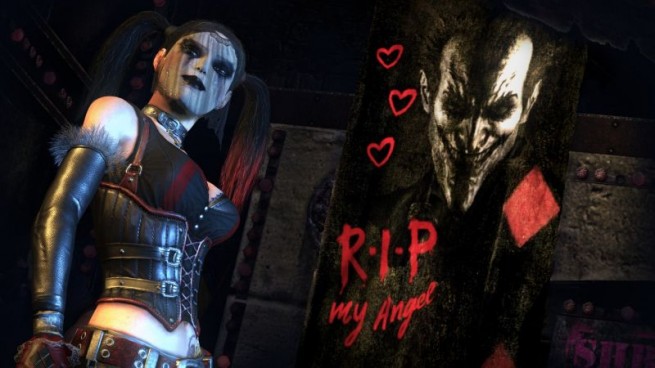 When we last put on the cowl of the Dark knight, he was tasked with finding a way to stop Hugo Strange, the warden of the mega prison Arkham City, from executing “Protocol 10”. After fighting through some of the more famous names of his rogues gallery, including a rematch with his old pal the Joker, it ended in the Joker dying of the poison in his blood from the titan formula he ingested in the previous game Arkham Asylum. If you Entered the Sionis steel mill after the conclusion of the game and activated a Harley head statue all you heard was her sobbing at the loss of her “pudding.” Well she’s all done crying and ready to fight back in Harley Quinn’s revenge.

The DLC starts off with Batman’s faithful side kick Robin, the Tim Drake incarnation, breaking into a building and taking out some of Harley Quinn’s goons. It turns out Batman is missing after he attempted to rescue some Gotham City police after Arkham City did a mass transfer of prisoners away from the structure. Harley Quinn escaped during her transfer and returned to the Joker’s hideout and set up shop. When Batman went in, he didn’t come out.

It’s made apparent that Bruce is still reeling from his night in Arkham City that ended with the deaths of both the Joker and Talia Al-Ghul his on again off again girlfriend and daughter of Ra’s Al-ghul. The DLC gives you on the fly advice on how to play robin, which comes in handy if you didn’t download the Robin and Nightwing DLC packs.

It’s apparent that Arkham city has changed Bruce. He’s more ruthless and cold than he already was while wearing the Bat suit, a fact made clear by his intense interrogation of the bad guys.  The game even lets you indulge Bruce’s more violent Batman by following the trail of a cop through several groups of inmates ready to fight, though these scuffles can be avoided if the player chooses.

The DLC can trip you up if you get used to Robin’s play style and then have to readjust to Batman’s controls. The two characters have different fighting styles, such as Batman being able to do an inverted takedown form a vantage point while Robin cannot. Robin also has some exclusive gadgets such as the zip kick which is a combat version of the Batclaw that pulls robin toward and enemy to deliver a kick that launches the enemy.

While the DLC didn’t do much to move the story forward it added some new areas to the already massive map of Arkham city. On a beginning to end playthrough the DLC runs to almost an hour, but has an added achievement to destroy all of Harley’s balloons found through the DLC so that adds a few more runs and more time to it to find them all.

Overall it’s enjoyable, but there could have been a lot more to it, especially seeing as the Arkham universe takes bits from the great Batman storylines and adds them in. I give it a 7.5 out of 10.