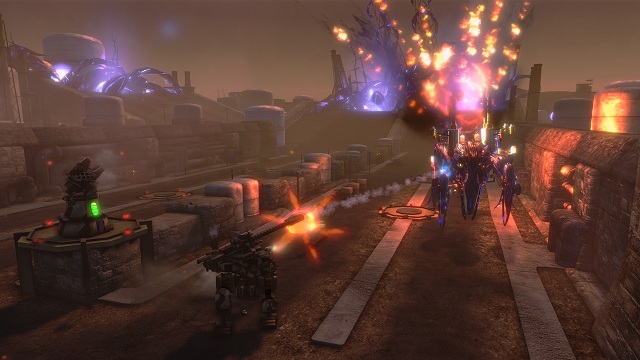 In our shining pantheon of video games, too often do downloadable games get the cold shoulder. The reputation for chintzy, non-serious forays into the industry by ill prepared indie developers leaves a bad taste in the gamer community’s mouth. Maybe one out of three or four titles don’t play like crappy ad-hoc flash games. Well, put down your awesome Techno Kitten Adventures, boys and girls. Trenched is about to Listerine the crap out of your little gumlines.

Double Fine Studios’ latest installment follows your adventures as a plucky young marine as he battles his way through wave after wave of sentient robots generically called Tubes and led by the insidious Farnsworth. The story itself is fairly straightforward: your CO, Commander Woodruff and his colleague, Vladimir Farnsworth were exposed to an alien technology in the south Pacific. According to Woodruff, the alien tech, known as The Broadcast, destroyed his body while it destroyed Farnsworth’s mind. You join into the story on Cmdr Woodruff’s flagship the USS McKinley at the start of another war between the duo.

As the creators of Stacking, Psychonauts, and Brutal Legend, Double Fine is known for their creative writing. Trenched is no exception, and, as usual, the gems are in the game’s minor details. Multiple moments in game are chuckle worthy for the right reasons. The weapon descriptions are pleasantly silly and unusual. The entire backstory is given from Woodruff’s perspective, so the validity of the choice to fight the Tube horde is never questioned. Rather than rely on some crazy reveal to move the plot along, the entire “why” part of the story is appropriately left unanswered as if to say that the only “why” you should ask is why you are not hopping to Woodruff’s orders more quickly. The tack they took and the little bits of whimsy they added in conjunction to the 40s styling make for a great, thoughtful, enemy blasting good time.

On its surface, Trenched is part shooter, part tower defense game. You pilot a huge battle mech called a trench and can deploy emplacements boasting various effects. Like most tower defense games, the object is to defend an objective or objectives for the allotted time period. The player must endure wave after wave of enemies, and there are only a few precious seconds between rounds to build or rebuild for the next wave. The pacing itself is well done, and the timing of subsequent waves serves well to create a sense of panic in a new player in the later levels. As kills are racked up, the player can collect scrap from downed enemies to purchase emplacements during the course of a particular level. Protip: You cannot take the scrap with you to the next level, so feel free to spend away, since each level is its own survival mode.

Digging a little deeper reveals a highly strategic and complex variety of setups the player can use. Your trench core unit can host a wide variety of tactics. Sit in place and mow enemies down with the large assault chassis bristling with machine guns and a turtle friendly set of tripod legs. Alternatively, you can sprint about the battlefield on a light and nimble engineering chassis with bipod legs, a couple small weapons, and a host of emplacements. Both play styles are easily accommodated within the variety of trench parts available. Among the weapon sets, the player can mix and match shotguns, machine guns, artillery, grenade launchers, and a host of other unique weapons with their own damage traits and modifiers. Emplacements range in ability as well, including weapon emplacements that mimic the weapon sets available as well as other important effects. You have a choice between 3 characters and a host of outfits to customize your marine as well, and each character has their own unique voice in the course of the game.

The game itself boasts great replayability. The entire campaign is only fifteen levels, but I found myself grinding levels for hours to build up my cash reserves and upgrade my cadre of parts and weapons. The same setup will simply not work for every level, and this need to effectively execute the mission with the right tools drove me to explore all the options I could.   As you complete missions, a running tally of various player actions adds up to complete challenges, much like the “shoot 50 macguffins for the next level Title” bars in some larger titles. Unique loot is available at each level, rewarding the player with shiny toys each time they replay a mission. There are two sets of challenges to complete, one for individual player stats and another for team stats. The desire to co-op with friends is rewarded with additional achievements and toys for you and your friends to enjoy.

Trenched is not without a few quibbles, however. In the single player game, the enemy hordes arrive in the same pattern for each level. There is no variation to their numbers, their spawn points, or their tactics, so grinding levels does eventually get tedious once you have acquired just about all the loot the game has to offer. Luckily, the loot amount is so huge that it took close to 20 hours of solitary for the game to reach that staleness. The menu system is a little obtuse and difficult to navigate at times. The biggest personal gripe I have with the inventory system is that your equipped items do not show up in the inventory list below until they are unequipped. Too many times I sold the superior spare part because it was not on my trench at that given moment.

Overall, Trenched is 50% tower defense, 50% shooter, 50% strategy game, and 150% awesome. At 1200 points on XBLA, Trenched is a great value, offering more hours of gameplay, more levels of complexity, and more firing neurons of fun strategy than most other titles at that price point. If you are a fan of mech shooters, tower defense games, or Double Fine’s work in general, this game will be a must buy for your collection.

SaveGame Rating: (85/100) – A somewhat cumbersome menu system is a minor issue in an otherwise solid title.