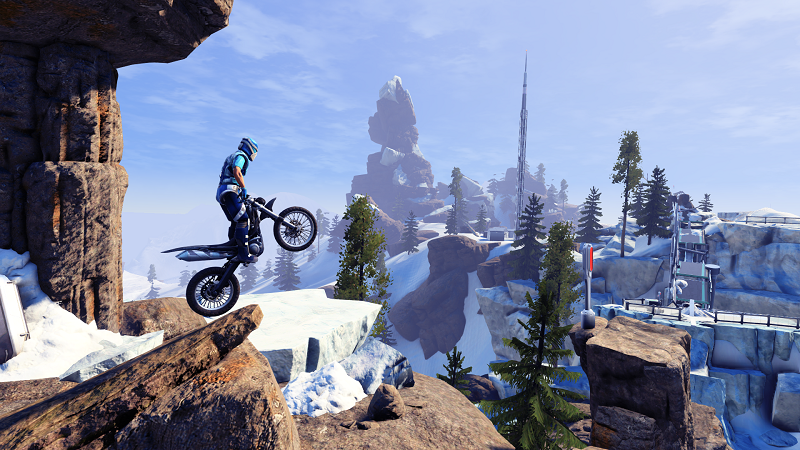 “Welcome to the future, man, machine the fusion.” These are the titular words you hear when first booting up the latest effort from RedLynx. Trials Fusion is the latest installment in the trials series, after the very popular and very frustrating Trials Evolution. Fusion sticks to the same formula with a capital F, being frustrating at times yet incredibly rewarding when you finally get past that obstacle you’ve been stuck on.

That’s the game’s bread and butter, fun and enjoyable gameplay. It may seem easy at first but once you get to those later tracks, you’re going to have to work hard for any sort of success. And you may end up paying for that success depending on your patience and how many controllers you destroy.

The folks at RedLynx have added something new this year with Fusion. Not only do you have the usual medals and tally boards that add that competitive edge to the game, but now challenges to each track have been added. These challenges range from performing flips on a zero fault run to getting up close and personal with the denizens of particular tracks. Also added to the mix are tricks – players are finally able to do more than just a back flip. These additions bring a new challenge to the game without taking away from the fundamental premise the series is known for – get to the end of the track with the least faults possible.

Fusion takes place in the future – or should I say the future of that game’s universe. It’s all very sparkly and shiny like most idyllic futuristic settings, but happily there are a variety of other environments – from jungles, to a desert and even a frozen city. From the dizzying heights of urban sprawl to the lush rainforests and ruins of rainforest rumble, RedLynx has stepped it up in the graphics department. Gone are the factories and warehouses from Evolution – instead they have been replaced by massive skyscrapers and ancient ruins. All of the tracks included have an atmosphere all their own – each feels like an organic, lived in place and not just a track to race through. Another improvement evident in Fusion is the quality of the backgrounds. They aren’t just bare fields anymore – there is now something happening in the background as you race through the track. Combined with the atmosphere generated by the design of each track, this gives the feeling of a living, breathing world, rather than just a track laid out on an environment.

The level builder was one of the most interesting and genius parts of Evolution, and in Fusion it has been improved. The community was responsible for some amazing tracks in Evolution, and in some instances these fan-made tracks were better than what shipped with the game. With the inclusion of additional options as part of the creator in Fusion, the community creations are set to be even more impressive. RedLynx have added triggers, events, large buildings and terrain transformation to the creator, which is sure to delight those innovative track creators.

The bikes featured in Fusion are more or less the same as what was seen in Evolution – you start off with the slowest bike and work your way up to the more impressive options. There’s the more powerful roach, the nimble pit viper, the fmx bike and the foxbat which shines in stunts. New bikes are also featured, and there is the option to customise your bike, allowing players to indulge in changing their bike’s colour, body kit and wheels, in addition to customising their rider’s outfits for the more personal touch.

To bring this rider to the finish, if you played Trials Evolution you’ll like Trials Fusion. If you’ve never played a Trials game, Fusion is a good one to start with. Fusion is a fun game that will make you mad and happy in about the span of three minutes, depending on how many times you fail. Take a chance and try this one out – Trials Fusion is available on Xbox 360, Xbox One, PS4 and PC.