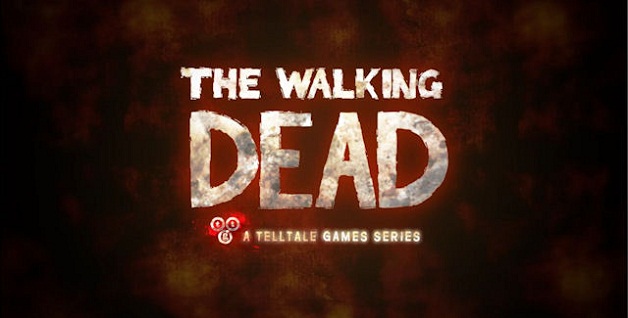 As a long time fan of The Walking Dead, and as someone who never really got into the adventure game genre, I found myself conflicted when it came to Telltale Games’ new The Walking Dead game released last week. Telltale has done what I would have thought was impossible, making a zombie game true to the source material, while creating genuine moments of tension in a genre that isn’t known for its horror elements.

You will find yourself solving puzzles, finding items for people too lazy to get them, and making life or death decisions that ultimately impact how your fellow survivors treat you. All of this in a detailed cel-shaded style that looks like a colored adaptation of the comic, or a stylized version of the television show, so you will find yourself familiar with the setting no matter what format led you to the game.

You play as Lee Everett, who begins his game in the back of a police car. The chatty sheriff escorting you out of to prison leads you to believe you found your way there because of some kind of trouble you got into because of your wife. The conversation is peppered with an almost comedic escalation of law enforcement vehicles heading their way towards . Before Sheriff Exposition can finish telling you what crime you’ve committed, he is run off the road. You awake, injured and handcuffed while surrounded by (ominous music) zombies! After the tutorial of escaping the car, removing your handcuffs, and stopping the formerly living, but currently moving sheriff, you finally begin the game. 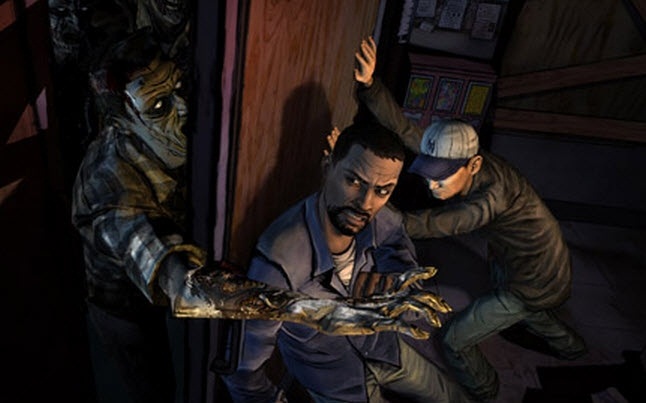 The story as a whole was more than I was expecting. Lee finds himself in a variety of locations in (including a familiar farmhouse), and with a variety of different characters (including a familiar young asian man). Which brings me to a slight complaint about the story: Telltale did a great job at making their own characters that feel like they should be in a Walking Dead spinoff that the hooks from the source material feel forced. Coincidence is the support beam that holds up the story of this first episode, especially when you do a little investigating in one of the main locations.   I don’t expect this to be an issue in future episodes, but it was a nagging voice in my head while I played this one.

As far as controls go, you get the usual adventure game cursor, sweeping across a landscape looking for things to interact with. It takes a little getting used to, moving Lee in one direction while scanning with the cursor.   What sets it apart are the high tension moments, such as being backed up against a car, trying to use the cursor to load a shotgun while a zombie crawls towards you. Any time you mess up you feel like its your fault and not the game being cheap, which is something I appreciate. There are a couple of puzzles whose solutions aren’t very straightforward, so it takes that special kind of Adventure Game Logic to solve them (which I don’t have). I took the option that didn’t provide hints, and only managed to get stuck once, but I would imagine that if I had the hints turned on it would be no problem. 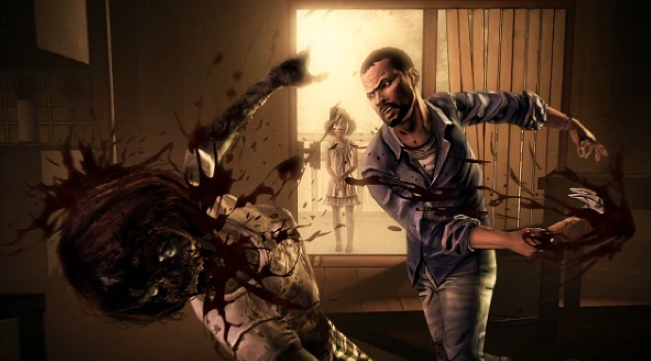 (I apologize in advance) “STOP! Hammertime!”

There are emotional high notes out there for you ‘games are art’ types, Lee’s relationship with orphan girl Clementine for starters.   Lee is put through the emotional wringer with a variety of catch-22 decisions, no win scenarios, and reconsciling his past.

Not bad for a two hour downloadable game, especially at five dollars. Achievement wise, all you have to do is beat the episode once and you get 100 points, a total which I imagine gets higher with each new episode. I think this was a great introduction to a story that has me completely hooked and ready for the next episode.