It’s been a while between releases for the Wasteland series. The first Wasteland released in 1988, and thanks to a very successful kickstarter by InXile Entertainment, Wasteland 2 is now available, with only a 26 year wait between titles. That wait has definitely been worth it, however, with Wasteland 2 showcasing the very best of the post-apocalyptic RPG genre. Whilst this genre has seen many titles release over the past few years, Wasteland 2 epitomises the sense of exploration, of creativity and adventure that has been largely absent in many of the genre’s newest releases. If you’re like me and you’ve been waiting for an old school RPG to seek your teeth into – Wasteland 2 is that RPG.

In Wasteland 2, you play as a member of the Desert Rangers – a loosely organised militia who are tasked with protecting the survivors of an apocalyptic event. At the beginning of the game, you’re asked to select your own party and you can do so by either choosing from an already created roster of individuals, or completely creating your own squad from scratch. If you create your own party, you can craft their backstories, their skills and abilities and their characteristics and appearance. The range of choice here is impressive, allowing you to craft whatever kind of ranger you wish, and ensuring that whichever way you choose, you’re able to tap into that creative expressiveness that forms the basis of any good RPG. Regardless of which way you choose to fit-out your party, the goal in party creation remains the same – to choose a party that has a variety of strengths that will compliment eachother and see you through the trials you will face as a desert ranger party. And trust me – there will be trials.

Quests in Wasteland 2 are diverse – ranging from investigation quests to quests which require the player to think laterally and quests that simply ask the player to kill every single person who stands in their way. There’s a whole bunch of quests that are optional for your party, and if you do decide to complete them, there are choices provided to you as to the way you complete them. Depending on your party’s skills, you can choose to be a diplomatic ranger, or a menacing ranger, or a sly ranger who gets their way through manipulating others. It’s a wonderful way to ensure the longevity of the game, as depending on the way you choose to play the game, your experience with it will be very different to another person’s, and multiple playthroughs are needed to see each of the different ways quests can play out.

In addition to choosing the way you want to complete quests, you will also be faced with moral choices centred around which quests to tackle first. One of the first choices you will face in the game is deciding who to help out of two groups who both desperately need assistance. One group is responsible for generating food for many people in the wastes, whilst the other group stands guard over and purifies the only source of water in the wastes. In Wasteland 2, not everyone can be saved or helped, and it is up to you as the leader of your ranger party to decide who you assist. And these choices have impacts. Choose one way and you seal the fate of the others you have decided aren’t important enough to save. Wasteland 2 really makes you think just what kind of ranger you want to be, and the sense of morality it creates as a result of quest decisions and exploration is one of the best parts of the game.

The dialogue and plot within Wasteland 2 is exceptionally well done. Each character you come across feels like a complete character with their own motivations and backstory. There will be some characters you love, some you hate, but through their dialogue both written and voiced, each character makes an impression. In addition to the NPC’s you meet as you journey through the wastes and complete quests, your own party members will also voice their opinions during your gameplay and as a result of the choices you make. These opinions are brief and do not happen often, but the inclusion of these brings depth to the game and reminds you that your party members are their own people and have their own opinions. It re-inforces the central theme running through the game that people are people and what they do and say represents who they are.

Wasteland 2 features a nuanced and diverse levelling up system, enabling you to be whatever sort of ranger you want, with a party that compliments your unique skills. Adding points to the skills you want your ranger to have is simple, but deciding on those skills in the first place is hard, because there are so many choices and so many ways to play the game. In the end, I decided on a ranger build that was heavy on weapons, lockpicking and leadership skills, and levelled my party up on skills that complimented these choices. In Wasteland 2, it really is all about what sort of experience you want to have, and what kind of ranger you want to be. If you want to be a bruiser of a character who gets by through sheer force of will, you can level up those skills. Alternatively, if you want to be a rogue ranger who stands back from the battlefield, using sniping to cause damage from afar, you can level up those skills. The good thing about having a party adventure with you is that if you find out a third of the way through the game that your ranger build really isn’t working for you, you can alter the builds of your parties in order to offset the limitations of your ranger’s skills. The nuanced levelling up system is another way the game ensures replayability is a viable, and attractive option post-game completion.

From a UI perspective, Wasteland 2 is equally rewarding and frustrating. The layout itself is crisp and clean and ensures navigating through screens is effortless and efficient. The inventory screen and the levelling up screen are very well done and the simple layout reduces the frustration felt in transferring items from one character to the other often seen in RPGs. The dialogue window is similarly well-crafted and options for discussion are easily set out with conversations following a logical structure. Unfortunately, I found the camera controls to be very unintuitive – trying to swing the camera to be looking the way you want it to look was an exercise in frustration and battling with the controls in this way reduced my enjoyment of the game. Zooming into the action and zooming out were also sometimes of an annoyance, as there were times I couldn’t quite get the right mix of being close enough to see the action but being further away enough to see enough of what was in front of me to plan my next course of action. 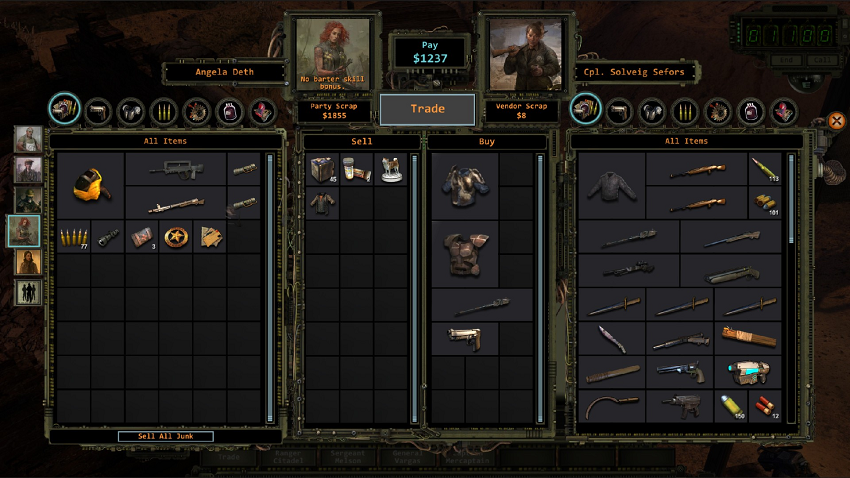 Combat wise, Wasteland 2 employs the tile-based, tactical combat that is well known to fans of this genre. Each of the battles you engage in are distinct, beginning with a very impressive “Encounter begins!” message which then catapults you headfirst into the encounter. From here, you choose your own actions and select actions for your squad, ranging from attacking, moving, reloading, unjamming weapons, taking cover and healing your squad. Each action you choose will require a certain amount of action points, calculated by the skill you or your squadmates have, and if you do not have enough action points that round to complete a particular action, you’ll have to wait until your next turn to complete it. If you kit up your party with the right gear and right skills, your choice of tactical approach in encounters is nigh on limitless, and you can choose what sort of style you prefer for each encounter. As evidenced, the combat system has incredible depth and is highly nuanced, and even more impressively, what works for one combat encounter won’t necessarily work for all of them, requiring you to really think about the approach you want to take. I had a truck-tonne of fun with the combat in Wasteland 2, and felt a sense of achievement upon being victorious in these encounters, because they really are damn hard at times. Unfortunately, the amount of encounters you will face will mean that you are always scrounging for bullets for your weapons. And in the wastes, bullets are hard to come by and depleting your stock requires that you return to a main base to restock. This constant travelling back to somewhere I could purchase more bullets broke the immersion of the game for me at times, and in the end the inconvenience of travelling backwards and forwards to restock meant I attempted to avoid encounters as much as possible.

Given the setting and type of game that Wasteland 2 is, there will inevitably be comparisions between it and the Fallout series. Having played both, I can say that each has their own strengths, and each offers a different experience to the other. However, I must admit that Wasteland 2 engaged me more than the recent Fallout games did (I’m talking Fallout 3 and Fallout: NV). Wasteland 2 succeeds in creating a more nuanced moral canvas where your choices really matter. There’s a sense of atmosphere and characterisation to Wasteland 2 that I found missing in the Fallout titles. Whilst the Fallout titles may provide you with a larger, open world game world in which to explore, and offer you more choice in adventuring by yourself, Wasteland 2 offers a world with more moral choice, that is influenced more by your decisions and the way in which you choose to play the game.

Overall, Wasteland 2 is a highly enjoyable, nuanced, emotive and intricate game that asks you do more than simply exist within its game world. The choices you make alter the Wastes in ways that often are unexpected and result in their own moral quandaries. Wasteland 2 is a game all about choice – choice in how you complete quests, choice in what sort of ranger you are and choice in what sort of party you journey with. In the end, the experience you have with Wasteland 2 will be completely your own, and the enjoyment you get will be directly aligned to the way you have played the game. If you’ve never ventured into the world of turn-based, tactical RPG, Wasteland 2 is your gateway game. It’s easy for newcomers to play, whilst still providing an experience even the most veteran of post-apocalyptic RPGers will enjoy. I loved exploring the world of Wasteland 2, and the small issues I had with camera control and gameplay aside, I look forward to creating more rangers in which to explore the wastes.