0400. I haul myself from the warm comfort of my bed, my body protesting with every moment. It’s pitch black, I’ve had barely three hours sleep and whilst I don’t know much about what is ahead for me during the next few hours, I know it’s going to be physically demanding. EA Games – the organisers of this super secret event – have told me this much. But I expect what my mind envisons could potentially take place is far worse than what is actually planned. At least, I hope it is.

I prepare myself for the day’s activities, dressing in my army camo gear. I descend to the lobby of my hotel room with excitement and trepidation, to wait with the other participants, who look exactly how I feel. They, too, are dressed in full army camo gear and as a group we must look quite the sight. After a few moments our EA point of contact and minder for the day, Jiggsy, arrives and we depart for the Man O War steps at Circular Quay. With the sun just cresting the horizon, it is a sight which wouldn’t be out of place on a Sydney tourist postcard….assuming you ignored the army jetboat docked at the wharf, with two solemn army soldiers – Sam and Sam – standing to attention. Our initiation into an exceptionally challenging yet rewarding few hours had begun. 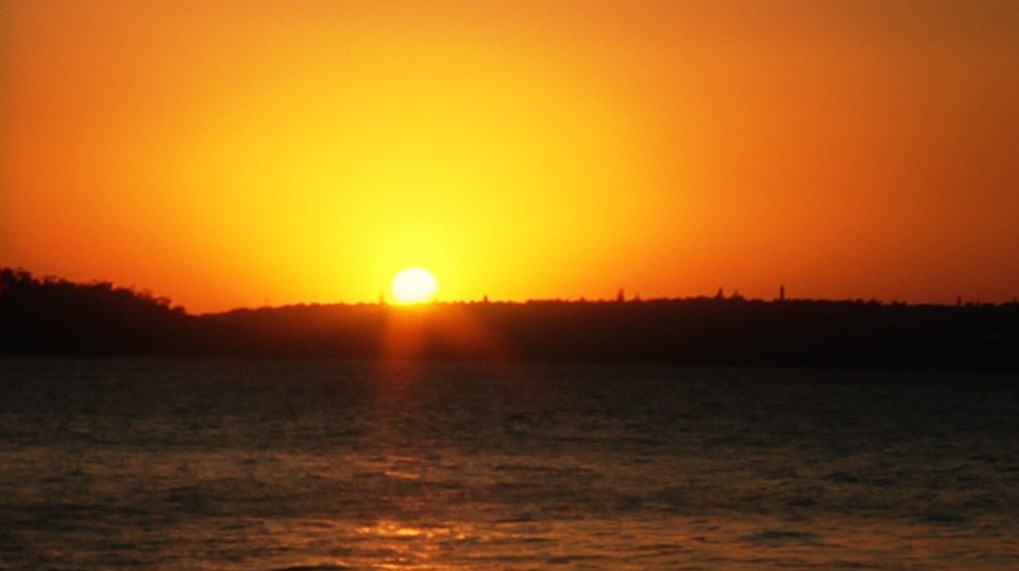 After filing into the boat and taking our seats, we sped across the harbour. Those seated along the sides of the boat encountered the full brunt of the sea spray as the boat turned and twisted throughout our journey. I silently congratulate myself for choosing to sit in the middle of the boat. My joy and self-congratulations at remaining dry, however, are short lived.

The boat pulls into a small inlet. Sam cuts the engine and tells us to jump out. Nervous laugher ensued as we surveyed the shoulder deep water surrounding the boat. Surely Sam doesn’t expect us to jump fully clothed into the water?!

Never one to hesitate, I jump into the water and begin wading to shore, the splashing of my companions sounding around me. We reach the shore, and turn to see our army boat leave with Sam and Sam and Jiggsy still on board. Suddenly we realise we have no idea what we are supposed to be doing next. We are drenched. We are alone. We have no phones and no ability to determine where we are. So we do the first thing anyone in our situation would do. 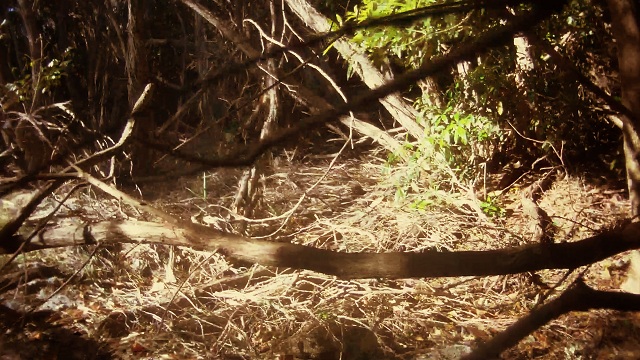 Stumbling through the bushland, through a path which leads to a road, we discover an army tank. It’s not long before soldiers appear and we’re told to climb into the tank, where we’re crammed, shoulder to shoulder in the dark and cold. Thankfully, as the tank’s engines power up and we roll out, both the lights and the air circulation kick in. To pass the time, we chatter excitedly amongst ourselves as we speculate on what’s to come.

On reaching our destination and emerging from the tank, we’re introduced to ‘Dog’ and ‘Rofo’, former members of the Australian Special Forces. Dog and Rofo would be responsible for our ‘training’ during the next few hours. I start to worry.

We assemble on the parade ground and stand behind individual backpacks with an assortment of equipment beside them. We are given instruction on the purpose of each piece of equipment and why it is an important component of an operative’s kit. After we are briefed on each item, we pack it into our backpack. Equipment included: a sledgehammer, to provide an idea of the weight soldiers must carry with them; a gas mask for those high risk, intense incursion situations; a bush saw to clear hanging branches and scrub in brushland; a small notebook and pen; and a horn which we are to use if we find ourselves in trouble. After donning webbing, heavy duty gloves and a shemagh military scarf, I am kitted up and ready to go.

We run around the parade ground at a brisk pace and I feel every kilo of my sledgehammer-filled backpack. We reach an imposing looking buiding and are issued with heavy, realistic-looking military grade black assault rifles. The addition of the gun means another thing to hold and more weight to carry, but there’s no time to dwell on this as we are given a safety briefing and jog to an open area. 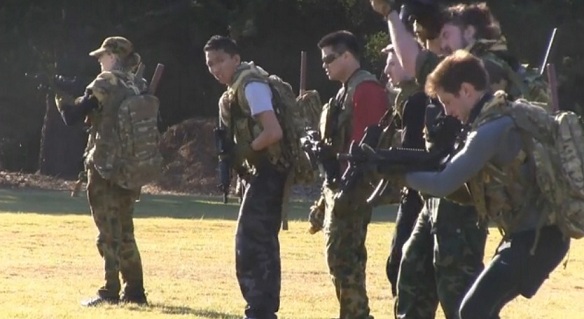 This unobtrusive looking open area would prove to be almost my undoing. We line up in single file and are instructed on the specifics of the leopard crawl. This is a hardcore crawl – I’m talking stomach and chest on the ground, inching forward using the inside of your legs and feet. After a demonstration of the crawl, it’s over to us to crawl across the ground using the technique we’ve been shown. With a heavy backpack strapped to my back, webbing on my front and carrying an assault rifle, the progress I make is anything but poetry in motion. My effort earns me the attention of our instructor and a new nickname from here on in – Cadet Blonde.

I manage to leopard crawl to where the rest of the cadets wait, and another crawl is demonstrated – the Guerilla crawl. This one sees us down on one knee, using our hands to move forward and whilst quicker than the leopard crawl, it was equally as physically draining. 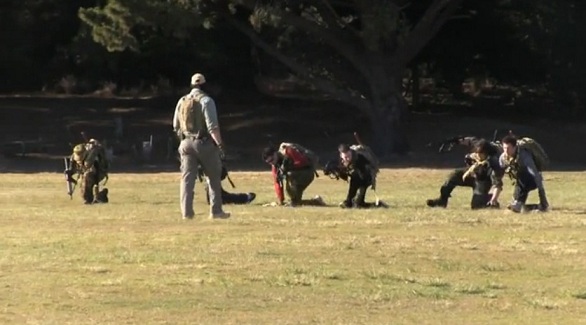 After covering more distance using this crawl, we’re given a break. My whole body aches. I am physically spent. EA wanted us to experience what a member of the special forces does. So far it has been eye-opening, humbling and physically demanding.

Next, we’re provided with camo-paint and briefed on how to apply it army-style. Then, it’s on to sniper school.

There’s a sniper who’s been watching us. Can we spot him amidst the brush and foliage? Unsurprisingly, we can’t, so we are taken to him and shown how to construct a sniper dig. We’re shown how to move through brush without being seen and the most effective way to advance. We’re given a challenge – make our way through the brushland using our newly acquired skills and achieve two objectives: 1) remain undetected by the Sniper who’s on the lookout for us and 2) get close enough to the sniper to accurately name the number he is holding up. We set off.

I cover ground slowly, but I’m not spotted. I keep low to the ground, reach the halfway point and continue on. I push past several snake burrows and reach what I believe to be a good position to set up my sniper spot. Discarding my backpack, which now feels around 40 kilo’s heavy, I manoeuvre myself into position, crawling along the ground with no heed to the damage my knees and elbows are taking. Once I’ve established myself in my spot, I ready my horn and am about to signal that I’m in position.

But someone else directly to my right blows their horn first.

I don’t have enough time to make final preparations – from now on the sniper is looking in my direction and I must remain perfectly still if I have any chance of remaining unseen. The sniper directs his spotter towards my location. Things aren’t looking good. He walks directly to me, pauses, then following the sniper’s commands, discovers my casually tossed aside backpack. Inwardly, I curse. But despite finding my backpack, he doesn’t find me. I consider this a half-win.

After receiving feedback regarding my performance, I head out of the brush and back to the main base for our final task – a real-time mock hostage situation with terrorists and nerf guns and gas masks. Walk in the park, really.

We swap our heavy assault rifles for nerf guns and are briefed on the situation: a group of terrorists (played here by our lovely EA minders) have taken a hostage and are holding her somewhere within the building in front of us. Our objective is simple: kill the terrorists, find the hostage, free her and escort her to safety. We’re informed there’s a potential that the terrorists have toxic gas at their disposal, so gas masks are a must. Donning our masks, we divide into two teams, ready our nerf assault rifles and prepare ourselves for action. 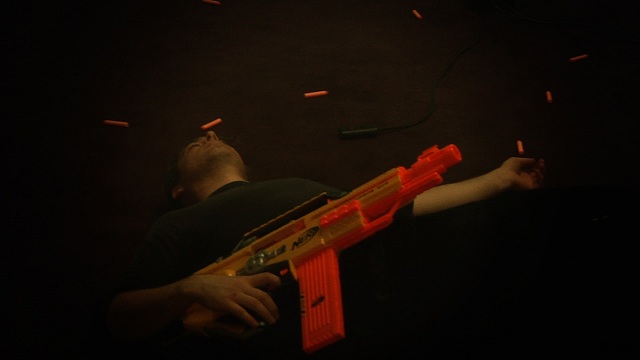 What followed was a frantic few minutes of storming and clearing rooms, nerf darts flying everywhere as terrorists shoot at us and we return fire, laser sights hitting surfaces and orders barked at us. “Clear that room.” “Check the stairs.” “Watch out for snipers.” It was an adrenalin-fueled, heart-pumping, action-filled few minutes as we searched for and found the hostage.

After escorting the hostage to safety, we assemble at the last room to be cleared, waiting at the closed doors. When the order is given, we storm through the doors to discover the room was filled with HD TV’s and Xbox360’s – the TV screens showing the Medal of Honor: Warfighter logo and teasing us with a ‘press start to continue’ caption.

Our day of testing was over. We’ve survived (mostly) scar free. Our reward – hands on time with Medal of Honor Warfighter – awaited.

I would like to thank those involved in making my Medal of Honor Warfighter experience memorable, including everyone from EA (with special thanks to Jiggsy who was a fantastic event host); the Special Forces operatives Dog and Rofo, as well as Sam and Sam and everyone who assisted us during the day; and my fellow cadets, who suffered alongside me and made the event an experience I’ll never forget. It was an exhilirating and memorable experience which provided those of us who were fortunate enough to have been given the opportunity to be a part of it a practical insight into the experiences of a special forces operative and how physically demanding their jobs actually are.

My hands on preview of Medal of Honor Warfighter will be uploaded soon. Until then, take a look at the footage captured by fellow Cadets Rob and Jarrad from Somewhat Awesome Films, whom I must thank for providing me with HD caps for this article to break up my wall of text. For more coverage (including the action tash! scenes shown above), New Game Plus TV have additional footage, featured on their latest episode, which kicks off at around 12:30.